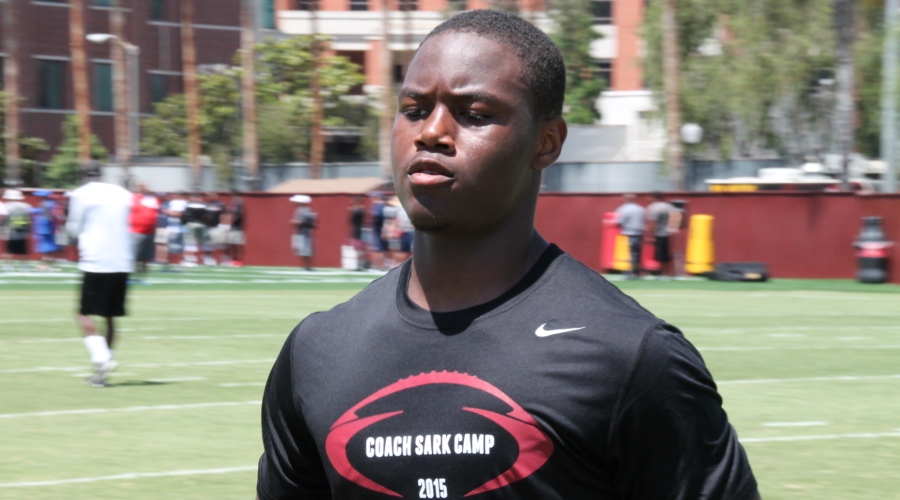 The Obvious: One of the important recruits at this week’s Rising Stars Camp was linebacker Daelin Hayes (above photo), a Trojans verbal from Ann Arbor (Michigan) Skyline.

The Not So Obvious: Still the one. What makes Daelin Hayes appearance at this week’s Rising Stars Camp extremely important is the fact that Michigan coach Jim Harbaugh would like nothing better than keep one of Michigan’s best at home. Hayes has said all along that he is solid for the Trojans, but you just know Harbaugh will be pushing the recruiting envelop until the ink is dry on Hayes letter of intend.

The Obvious: Receiver Amari Rodgers (5-10, 185), the son of USC receivers coach Tee Martin and the class of 2017 announced his commitment to the Trojans as part of the Rising Stars Camp.

The Not So Obvious: There have always been offers given and offers accepted during the history of Rising Star Camps. This week’s Rising Stars Camp was no different except an offer accepted came from the son of Trojans wide receiver coach Tee Martin. Martin’s son, Amari Rodgers, currently attends Knoxville Catholic High in Knoxville, Tenn.

The Obvious: There has been some fear by Trojans fans that Tee Martin, a whirlwind of a national recruiter, might be looking to move up on the assistant coaches pecking order, which generally mean being elevated to an offensive coordinator.

The Not So Obvious: One would think that with Tee Martin’s son coming to Troy in two years that it would be a lock that Tee would stick with the Trojans to coach his son. However, in the world of college and NFL assistant coaches, there is never a sure thing, but it wouldn’t be out of the question to think that perhaps one day Martin might be a future candidate for the Trojans offensive coordinator’s position should that become open.

The Not So Obvious: Although Asiasi did not participate in this week’s Rising Stars Camp, which brings together many of the cream of the crop recruits for the class of 2016, the fact he was in attendance is equally as important as participating. Asiasi really has nothing to prove; however the bonding of possible teammates and hanging around the Trojans campus is a major coup for Sark and his band of coaches.

The Not So Obvious: One of the major Rising Stars Camp benefits for the Trojans staff is the inroad that can be made between recruits. Like the Mafia’s code of silence, nobody knows more about recruits than the recruits, who normally remain silent to the media when it comes leaking recruiting information.

The Obvious: This week, ESPN.com came out with its Future Power Rankings for 2015 and the Trojans are positioned at No. 6.

The Obvious: The ESPN.com power ranking is based on five categories, which includes coaching, current talent, recruiting, title path (schedule) and foundation.

The Not So Obvious: Last season, the Trojans power ranking was 81.70, so beginning the season and while not having played a game, the Men of Troy have increased their score by 2.75. Of course, this is all based on potential at this point but interesting nonetheless.

The Obvious: In each of the Future Power Ranking’s five categories, each category is given a 1-10 point scale with a 10 being the best of the best.

The Not So Obvious: The closest the Trojans came to a Perfect 10 is in the category of “Current Talent,” which the Cardinal and Gold achieved a 9.5 as compared to last season’s 8.2. No doubt, this is quite a jump and part of the reason for such warranted optimism for 2015.

The Obvious: There continues to be much debate regarding the coaching perception of Steve Sarkisian and his staff.

The Obvious: The Trojans were at the top or very near the top for the signed recruiting class of 2015.

The Not So Obvious: In Sarkisian’s first recruiting class, the Trojans recruiting, according to the Future ESPN Power Ranking, was a 9.2 as opposed to this season’s 9.3, which shows a slight increase between Sark’s first two recruiting efforts.

The Obvious: Most would agree that the annual USC football schedule is normally challenging to very challenging.

The Obvious: Most would agree that Steve Sarkisian and his staff have cemented a real strong future for USC football.

The Not So Obvious: According to the Future ESPN Power Ranking, the Trojans “Foundation” for the future is 9.3 as opposed to last season’s 8.8. No question this is a dramatic increase. It means the Trojans are positioned to fulfill future high expectations.

The Obvious: And finally, there has been interesting discussion on the WeAreSC “Huddle” message board regarding former Trojans running back Ty Isaac, now at Michigan.

The Not So Obvious: Isaac has been gone from Troy for a while, but what makes the Isaac at Michigan interesting food for thought is how much Ty will play this season and will he stay healthy if Jim Harbaugh runs his backs as he as in the past at Stanford. Could the Trojans have used Isaac in 2015?