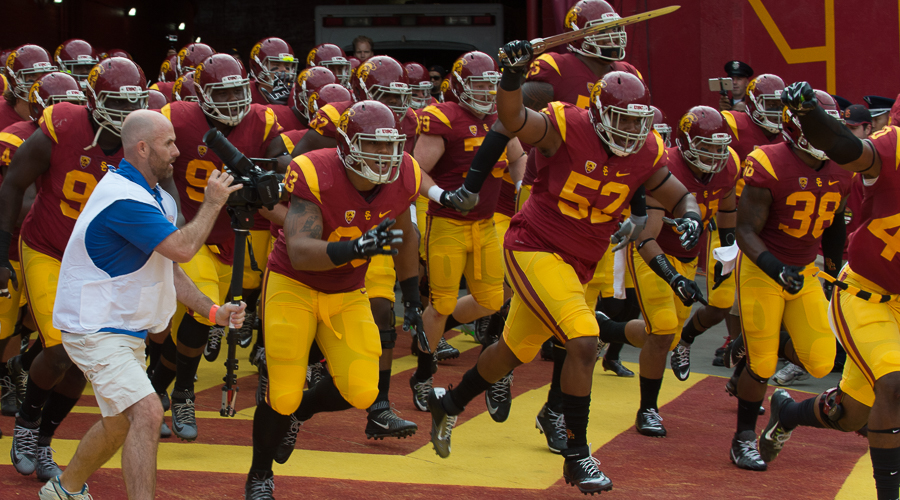 The Not So Obvious: Saturday’s game marks the end of a three-game Trojans homestand to open the season, and there will be a lot on the line when the Men of Troy and Cardinal have at it. The most obvious is that this is a Pac-12 game, but it is not a South Division game, so it’s not really an elimination match just yet. However, from a national perspective, it means a lot, especially to the highly ranked Trojans, who would love to remain undefeated and impress the College Football Playoff Committee.

The Obvious: The Trojans opened as 9 ½ – point favorites to defeat Stanford.

The Not So Obvious: This is the first time since 2008 that the Trojans are facing an unranked Stanford team. The last five meetings have been decided by eight points or less, including the past two that the Trojans have won on late field goals. The Trojans are the only in-state California school to defeat the Cardinal this decade.

The Not So Obvious: The ABC broadcasters for Saturday night’s game will be Sean McDonough (play-by-play), Chris Spielman (analysis), and Todd McShay (sidelines).

The Not So Obvious: The Stanford broadcast can be heard on flagship station KTRB 860 AM with Scott Reiss (play-by-play), Todd Husak (analyst) and John Platz (sidelines).

The Obvious: Through two games, the Trojans offense is averaging 57.0 points per game while the Stanford defense is allowing 6.5 points per outing.

The Obvious: The Los Angeles weather report for Saturday calls for sunny with a high of 87 and a low of 71 degrees.

The Not So Obvious: The real weather report will be whether the Trojans can continue their high scoring ways against a Stanford defense that is both young and inexperienced. Prior to the season, Cardinal head coach David Shaw dismissed the notion that his team’s inexperience on defense would be a major factor in games. On the contrary, he felt that his defense was very talented and has no lack of team speed. Because Stanford lost its early morning season-opener on the road, 16-6, against a well-coached Northwestern team in Evanston, Illinois, and looked sluggish in victory at home over Central Florida, 31-7,the sky appears to be falling in Cardinal land. We’ll find out whether that’s true, as both the Cardinal and the Trojans will be out to prove they are better than advertised for different reasons.

The Trojans continue to score at a prolific pace, albeit against two inferior opponents that have yet to win a game (0-4). Trojans quarterback Cody Kessler has feasted on two weak defenses, something he has shown consistency in his career. Stanford will present a new challenge in terms of an upgrade in opposing defensive talent. We’ll see whether the Trojans running game can get going and the offensive line can dominate Stanford front 7, which will be a major key. The Trojans have explosive talent in receivers JuJu Smith-Schuster and Steven Mitchell Jr., running backs Tre Madden, Justin Davis, and Ronald Jones ll, and the incomparable Adoree’ Jackson when he plays receiver on offense. On paper, whether Stanford’s young defense can deal with so many Trojans offensive weapons will certainly be a barometer for the game.

The key on defense is whether the Trojans can stop Stanford senior quarterback Kevin Hogan, who can be either super hot or ice cold. This could be the game to find out whether the Trojans pass rush can be effective without former All-American Leonard “Big Cat” Williams, now with the NY Jets. The Trojans could start true freshman corner Iman “Biggie” Marshall in place of experienced senior Kevon Seymour, who is still nursing a tender knee. The Cardinal figures to test Marshall early and often. We’ll also see whether Stanford goes right after the Trojans inside linebacker corps, specifically returning senior linebacker Lamar Dawson (rib injury and impressive freshman Cameron Smith, who still figures to start on Saturday.

And don’t forget special teams. In the Trojans Alex Wood and Stanford’s Conrad Ukropina, neither has much experience placekicking, and so we’ll find out whether either one will be the difference in the game – good or bad. Wood thus far this season is 1 for 1 while Ukropina is 3 for 3 with a career-long of 52 yards at Northwestern.

The Obvious: A base ticket price for the Saturday night’s game against Stanford is $70.

The Not So Obvious: As of Friday, the cheapest ticket on StubHub for the Stanford/USC game was going for $59 in the upper end zone of Tunnel 15.

The Obvious: The Trojans head coach is Steve Sarkisian, who says that by turning over the play calling duties to offensive coordinator Clay Helton he has learned much about the “nuances” of his defense and special teams.

The Not So Obvious: Thus far, you can’t argue with the offensive point totals of the Trojans under the play calling of Helton. With the Trojans averaging 57 points per game, the numbers suggest that all the preseason ballyhoo over the offensive talent is there.

The Obvious: The head coach of Stanford is fifth-year head coach David Shaw.

The Not So Obvious: The big question amongst Stanford fans is whether Shaw, who was once a prime candidate for offensive coordinator under Trojans former head coach Lane Kiffin, has previously won big because of the talent recruited by former Cardinal coach Jim Harbaugh, now at Michigan. It all gets down to recruiting and while Stanford has been given solid marks under Shaw, there is some question on the Farm if the red and white is also simply missing the fire that Harbaugh brought to the table.

The Not So Obvious: Hogan is a fourth-year starter and is among Stanford’s career leaders in TD passes, total offense and passing yards. Running back Christian McCaffrey leads the Cardinal in rushing, receiving, punt returns and kick returns, and is 13th nationally in all-purpose running, tops in the Pac-12. Receiver Devon Cajuste and tight end Austin Hooper lead the receiving unit. The Cardinal defense is 11th in the country in pass efficiency defense, 15th in pass defense and 18th in both total defense and scoring defense. Key defenders include linebackers Blake Martinez, Kevin Anderson and Peter Kalambayi.

The Obvious: Stanford is the Trojans oldest rival, with the series dating back to 1905.

The Obvious: The Trojans currently have four players who attended high school in the Bay Area.

The Obvious: The Trojans have a wealth of running back talent in 2015, which features the tailback strength of senior Tre Madden, the guile of junior Justin Davis, and the electrifying speed and cuts of true freshman Ronald Jones ll.

The Not So Obvious: If there is one area in the Stanford offense that is lacking, it has to be the bell cow type of tailback that once symbolized the power offense of the Cardinal. They simply don’t have a Toby Gerhart type of physical back that can wear down opponents in the second half. However, they still have an offensive line that features a number of players that will eventually head to the NFL.

The Obvious: Coming out of high school, there were scouting services that called Trojans true freshman tailback Robert Jones ll the best running back in the country.

The Not So Obvious: Thus far, Jones has rushed for a team-best 169 yards in just 14 carries.

The Obvious: USC is known as the Trojans.

The Not So Obvious: For those not old enough to remember or know, Stanford was known as the Indians from 1930 through the 1971 season when they elected to change their nickname to the Cardinals. However, since 1981, the Cardinals nickname became singular (Cardinal) and represents a color and not a bird.

The Obvious: Hyundai has again partnered with the digital food and travel network Tastemade to return to USC for an episode of The Grill Iron.

The Not So Obvious: Host Jax Tranchida will team with Chef Jerry Su of Eagle Rock Public House to cook up tailgate-inspired fare for Trojan fans at the Hyundai FieldHouse at the Trojans Fan Fest on Saturday in the grass area in front of the peristyle end of the Coliseum.

The Obvious: And finally, on Saturday night, there will again be special events and recognitions throughout the game.

The Not So Obvious: During the game, the 35th anniversary of USC’s Swim With Mike’s Physically Challenged Athletes Scholarship Fund will be celebrated. Since 1981, the “Swim With Mike” swim-a-thon fundraiser has raised more than $15 million for more than 160 Physically Challenged Athletes Scholarships for students who have overcome life-challenging accidents or illnesses. The fund is the only one of its kind allowing students to pursue both undergraduate and graduate degrees at USC.