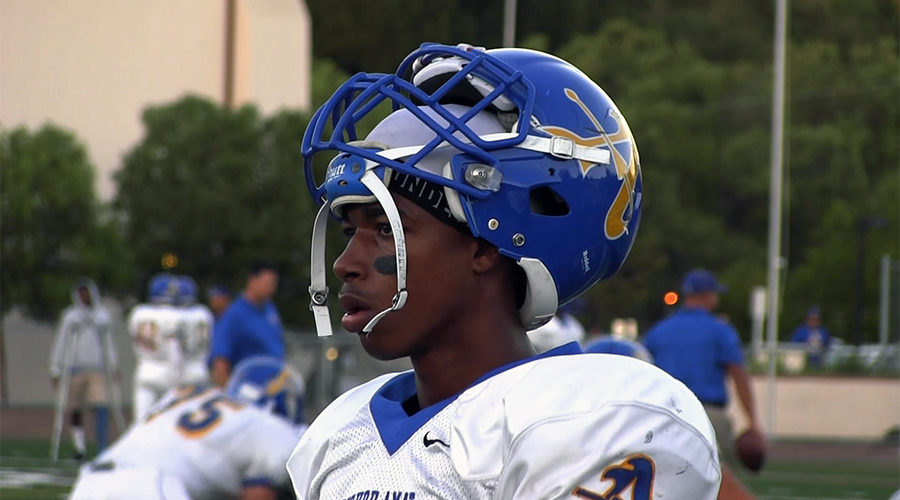 The Obvious: The Trojans now have two verbals from two players from the Deep South, receivers Josh Imatorbhebhe from Suwanee, Georgia and Velus Jones from Saraland, Alabama.

The Not So Obvious: So, by the O/NSO’s count, that makes two receivers for the class of 2016 with the probability of adding more. If you’ll looking for the local receiving nugget, you can start with La Puente Bishop Amat’s super catcher Tyler Vaughns (above photo), who leads a host of outstanding local receivers.

The Obvious: When the Trojans incoming freshman DB sensation Iman “Biggie” Marshall made his signing announcement, he did so through an extravagant video:

The Not So Obvious: In case you haven’t seen the video regarding the announcement of Josh Imatorbhebhe for the Trojans class of 2016, the O/NSO presents a public courtesy showing: http://bleacherreport.com/articles/2468249-the-commitment-stud-wr-josh-imatorbhebhe-commits-in-epictrailer?utm_source=facebook.com&utm_medium=referral&utm_campaign=programming-league

The Obvious: Both Josh Imatorbhebhe and Velus Jones made reference to the recruiting skills of Trojans receivers coach Tee Martin.

The Not So Obvious: In terms of recruiting, there isn’t a more valuable commodity than Tee. He is a recruiting dynamo and is one assistant coach that Steve Sarkisian would hate to lose.

The Obvious: When it comes to recruiting, fans are always looking for connections and impressions that might sway a nugget to their campus.

The Not So Obvious: In an excellent video interview by WeAreSC.com publisher Garry Paskwietz, Devin Asiasi punched all the buttons that a Trojans fan wants to hear from a national recruit. Among the important nuggets gleaned from the interview, Asiasi has formed a strong bond between himself and Trojans tight end coach Marques Tuiasosopo, has a cousin enrolled at USC, has former De La Salle teammate and current Trojans linebacker Michael Hutchings saying good things about Troy, isn’t concerned about the inner city location of USC, is comfortable regarding the strong Polynesian community at USC, and will be visiting Troy for the third time this summer. When it comes to the Trojans chances, you have to like what you are hearing.

The Obvious: The Los Angeles Football Club hopes to construct a 22,000-seat soccer stadium at the current site of the Sports Arena in Exposition Park.

The Not So Obvious: You figured if Magic Johnson is one of the partners, it probably going to happen and so much for a parking garage for the Coliseum.

The Obvious: Former Trojans inside linebacker Hayes Pullard has signed a contract with the Cleveland Browns.

The Not So Obvious: Leave it to Hayes to put his signing into literary terms with this tweet: “Just signed my NFL contract. This is not a new chapter in my life; this is just the next book. (Must read).”

The Obvious: As in every season, there are new 2015 rule changes that can impact a Trojans game.

The Not So Obvious: Trojans fans should be aware of a new kickoff rule for the upcoming season. On kickoffs it is illegal for the kicking team to block an opponent before the ball goes ten yards or before the receivers touch it. In other words, they cannot block before they are eligible to touch the ball. The rule change allows the IRO to create the foul if his review shows that the kicking team blocked too soon and recovered the football. Again this is a reviewable play that involves a line on the field or players touching a ball.

The Obvious: The Trojans will open the 2015 season by hosting Arkansas State.

The Not So Obvious: Apparently if Arkansas State was good enough for the Trojans to schedule, Nebraska is following USC’s lead by scheduling the Red Wolves for its 2017 opener.

The Obvious: For Trojans fans, nothing would be dramatic than if the Trojans somehow or someway managed to play themselves into the 2016 College Football Playoff title game.

The Not So Obvious: If that dream managed to become reality, Trojans fans should make a travel note that the Arizona Organizing Committee (AOC) and College Football Playoff (CFP) signature fan events will take place in downtown Phoenix in the days leading up to the CFP National Championship on Jan. 11.

The Obvious: Detroit has joined the bidding to host the 2018-20 College Football Playoff National Championships.

The Not So Obvious: Warning Trojans fans, if you were at the Final Four that was held a few years back, the general consensus was that Detroit is one lousy place to hold a major sports event.

The Obvious: Pasadena, the Trojans home away from home for the Rose Bowl, has already announced it will not bid on hosting a CFP championship game.

The Not So Obvious: However, other cities hoping to land the big CFP game include Atlanta; Charlotte, N.C.; Houston; Miami/South Florida; Minneapolis; San Antonio; and Santa Clara, Calif.

The Obvious: And finally, as part of its 75th anniversary celebration in 2015, the Football Writers Association of America (FWAA) is asking its members, which the O/NSO is part, to vote on a 75-year All-America team.

The Not So Obvious: You would be surprised which Trojans did not make the ballot. For starters, how about Heisman Trophy winning quarterback Matt Leinart and the Trojans lone Lombardi Award winner, offensive guard Brad Budde. There is a spot for write-in candidates. The O/NSO can tell you that Leinart was our first write-in candidate.