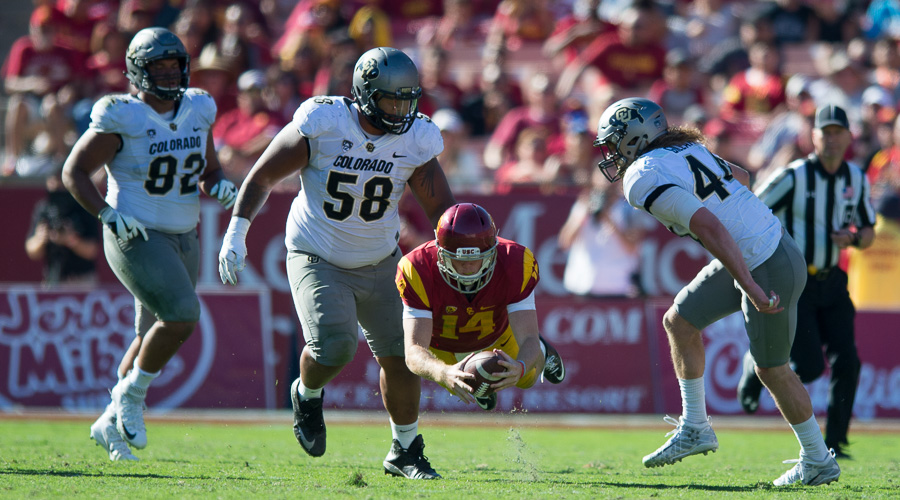 The Obvious: The Washington Huskies (11-1 overall, 8-1 Pac-12 North) and the Colorado Buffaloes (9-2 overall, 8-1 Pac-12 South) will meet tonight (Friday) in Santa Clara’s Levi’s Stadium (6 p.m. PT/FOX) for the Pac-12 Conference Championship, and the result will have ramifications as it pertains to the upcoming bowl destination for the USC Trojans (9-3, 7-2, Pac-12 South).

The Not So Obvious: No thanks to Tuesday’s College Football Playoff rankings, what appeared last Sunday to be clear, logical, and some feasible options for the Trojans to get to the Rose Bowl may have been thrown a monkey wrench on Tuesday night by the CFP committee when Colorado moved up a spot to No. 8; although the Trojans also moved up a placement to No. 11. That means two teams are currently wedged between the Buffaloes and Trojans, namely No. 9 Oklahoma and No. 10 Oklahoma State. While Oklahoma and Oklahoma State will “playoff” on Saturday morning (9:30 a.m. PT/FOX) with the loser probably going to the Alamo Bowl, one can only hope the Trojans can leapfrog the loser of Oklahoma and Oklahoma State and surpass Colorado if Washington can dominate the Buffaloes tonight, which might also allow the No. 4 Huskies to maintain their ranking in front of No. 5 Michigan and enter the CFP semi-finals.

If Washington dominates Colorado, the Trojans and Buffaloes would have the same number of seasonal losses (3), and it could come down to head-to-head competition, which Troy owns the tie-breaker with its 21-17 win in the Coliseum back on Oct. 8. However, if Washington beats Colorado in a close one, Colorado might not drop more than a spot, which could leave the Trojans one spot behind the Buffs even if the Cardinal and Gold move up a spot. Buyer beware when it comes to a CFP committee vote. There could also be the CFP committee’s sentimental vote for the Cinderella Buffaloes, and there are committee members that have been affiliated with universities that historically are not exactly USC friendly – can you say Stanford? Add to the human equation that Colorado is one of the “feel good” stories in college football in 2016 and wouldn’t a happy ending for the Buffs be the 2017 Rose Bowl? Not if you’re a USC fan.

The Not So Obvious: The ESPN CFP Selection Show will begin airing live at 9 a.m. PT/12 p.m. ET. It’s a four-hour window, so they may not begin releasing all the seeding and placement information until around 11 a.m. PT.

The Obvious: Washington opened as 7-point favorites to defeat Colorado on Friday night.

The Not So Obvious: Washington and Colorado did not meet during the regular Pac-12 Conference season. The Huskies own the series over the Buffs 9-5-1. Washington has won the last six straight games against Colorado.

The Obvious: The Pac-12 Championship Game will be nationally televised on FOX and on ESPN radio.

The Not So Obvious: The FOX broadcasting team will consist of Joe Davis (play-by-play), Brady Quinn (analyst), and Jenny Taft (sideline reporter).

The Obvious: The weather report tonight’s Pac-12 Championship Game in Santa Clara calls for a sunny with a high of 62 and a low of 42 degrees with humidity at 40 percent. It’s expected to be 54 degrees at kickoff.

The Not So Obvious: The real weather report is whether Washington will simply outscore a Colorado team that has a solid defense but doesn’t really have the type of explosive offense that can match the high-powered UW offense. If the Huskies get off early on the scoreboard, it figures that Colorado might be in for a long night. Both teams are strong defensively, and we’ll see whether each team’s secondary will be the difference, especially since both teams have outstanding receivers. In the end, the game could down to the men in the pit, and both teams have strong defensive fronts, but the offensive line edge would have to favor the Huskies and this could be the difference in the game over four quarters.

The Obvious: The Trojans will again gather to watch the Pac-12 title game and, no doubt, will be rooting for the Huskies.

The Not So Obvious: To jog your memory, the Trojans defeated Washington 26-13 in Seattle on Nov. 12 and beat Colorado 21-17 in the Coliseum back on Oct. 8. Yep, that’s two Top 10 teams entering Friday night’s championship game. A common foe is Utah, which defeated the Trojans 31-27 in Salt Lake City on Sept. 23 while the Huskies escaped Utah’s home field with a 31-24 win on Oct. 29. It could be argued successfully that this is where the Trojans planted their future and why they’re not in the championship game.

The Not So Obvious: The Huskies are averaging 44.8 points on offense while Colorado is giving up 18.4 point per game on defense.

The Obvious: Colorado has a workmanlike offense and relies on the playmaking of quarterback Sefo Liufau, running back Lindsay Phillip, and dangerous receivers Shay Fields and Devon Ross.

The Not So Obvious: Colorado’s offense is averaging 35.4 points on offense while the Washington defense is allowing 18.8 points per game.

The Obvious: Both Washington and Colorado field excellent defenses whose strengths include formidable defensive backfields.

The Obvious: There is a slim possibility that the Trojans could be sent to the Cotton Bowl and one of the most discussed opponents is the undefeated Western Michigan Broncos.

The Not So Obvious: If you’re interested in watching Western Michigan, the team that is also the home opener for the 2017 Trojans (Sept. 2), you can watch them tonight (Friday -4 p.m. PT/ 7 p.m. ET/ ESPN2.). In last Friday’s win over Toledo, Western Michigan quarterback Zach Terrell threw for 196 yards and three touchdowns, which wrapped up an undefeated regular season (12-0) and a berth in tonight’s MAC Championship Game. The No. 13 Broncos take on Ohio at Ford Field in Detroit.

The Obvious: And finally, if you’re a USC fan and you want the Trojans to go to the Rose Bowl, you desperately want Washington to win big tonight, and hope the CFP committee will seed the Huskies into the CFP semi-finals come Sunday and hope the Trojans can skip over Colorado.

The Not So Obvious: So, for one night, it’s permissible for Trojans fans to bark like a dog, wear some purple, and root like heck for a lopsided UW victory.