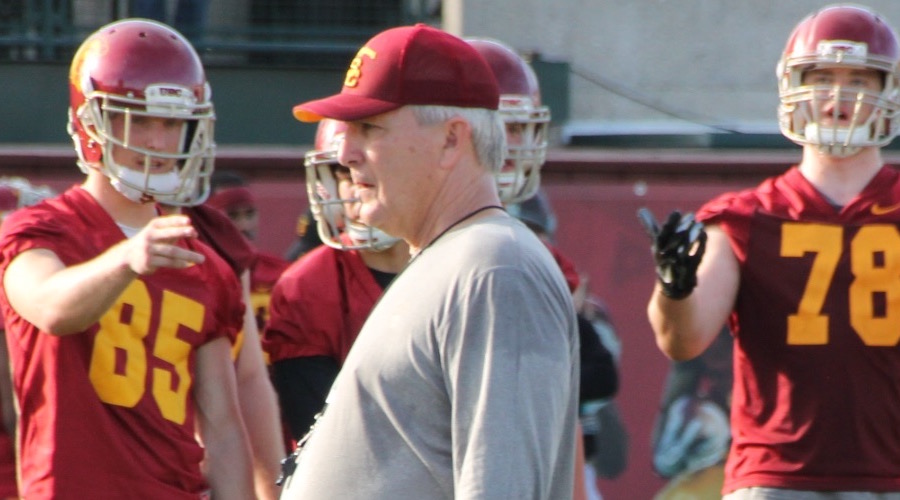 The Obvious: The USC Trojans will hold their first Coliseum spring scrimmage on Saturday (10 a.m.), and one area that will be under scrutiny will be coach Neil Callaway’s offensive line, a unit that thus far has been receiving rave reviews regarding its newfound physical dominance.

The Not So Obvious: This past week, the O/NSO spent some post-practice time with Coach Callaway to glean some of his thoughts, philosophies, and evaluation of his offensive linemen.

The Obvious: Neil Callaway’s specialty is tough, fundamentally sound physical football, so the O/NSO asked the coach what he learned from looking at film of the 2015 Trojans offensive line.

The Not So Obvious: In a distinct Southern drawl, Callaway told the O/NSO, “Well, you know being a newcomer, I don’t want to elaborate what was done last year. Everybody has their own way of doing things. We certainly have our own way of doing things. My goal for our guys is to play as hard as we can, be as physical as we can, and play as smart as we can. So if we can get those three things accomplished, I think we’re going to be a pretty good unit.”

The Obvious: No question when you see Neil Callaway at work, he has a different way of going about things than recent Trojans offensive line coaches.

The Not So Obvious: When the O/NSO asked Callaway about “his way” of doing things, he said, “We’re going to outwork everybody we play, that’s our goal. I think that’s the only way to be successful is hard work and perseverance. Everything isn’t always going to go our way, but we got to be working to make sure we get that done. You know, do the right thing whether it’s on the field or off the field. If we just do the right thing, I think that’s a good step in the right direction.”

The Obvious: As of Thursday, the Trojans have now completed five spring practices, so there’s still a long way to go in spring before Neil Callaway can make any definite pecking order of offensive linemen.

The Not So Obvious: However, Callaway still has formed some early assessments. The former Alabama lineman, who learned his toughness under legendary Crimson Tide head coach Bear Bryant, said, “I think we have a really good group, and I really like our guys. They’ve got a great attitude, and they’re working hard at it. I think there are a lot of little things we have to get corrected. I thought our first day back after spring break we were a little rusty because they’ve been gone for a week, but overall it’s a pretty good group and I think we can be pretty good, but there is a lot of work we’ve got to do.”

The Obvious: A 60-year-old coaching guru, Neil Callaway is “old school” and that means he believes not only in rock’em, sock’em football but great attention to detail.

The Not So Obvious: Callaway said, “Well, I think the little things are very important, but let’s face it, football is a collision sport and so that (physicality) is a big part of it. So we have to make sure we are doing those things.”

The Obvious: During his playing days at Alabama, Neil Callaway played against the Trojans during the late 1970s.

The Not So Obvious: Reminded of his days against the Trojans, Callaway said, “Yes, I was on the ’77 team that came out here, and we were lucky enough to win, I believe, 21-20. USC is a great place. I think the history speaks for itself.”

The Obvious: Junior offensive guard Viane Talamaivao has seen a different offensive line coach in each of his three seasons at Troy.

The Not So Obvious: Viane would be the first to tell that his new line coach, Neil Callaway, is a whole different animal. Talamaivao told the O/NSO this past week, “He (Callaway) is high demanding at all times. He’s a tough coach about the little things.”

The Obvious: Viane Talamaivao is experiencing a coach that has had great success teaching physical football.

The Not So Obvious: Talamaivao said, “He gets us tough by coaching toughness, and it’s built around physicality and hard nose practices. It’s not easy.”

The Obvious: Senior-to-be Wyatt Davis (Bellflower, Calif./St. John Bosco) is considered one of the nation’s top offensive linemen, and the Trojans would love to see his eventual signature on a letter of intent come next February.

The Not So Obvious: Davis spent some time this past week watching the Trojans offensive line practice, and he got an eyeful of Coach Callaway. As mentioned, Callaway played at Alabama, and the recruiting rumor is that Davis is currently an Alabama lean, but it figures the Trojans are deep into the hunt, thanks to Callaway.

The Obvious: And finally, every coach has a goal or measuring stick for his team or unit.

The Not So Obvious: In terms of his offensive line, Neil Callaway sees a successful season plain and simple: “To win every game. That’s our goal and take them one at a time and see what happens.”