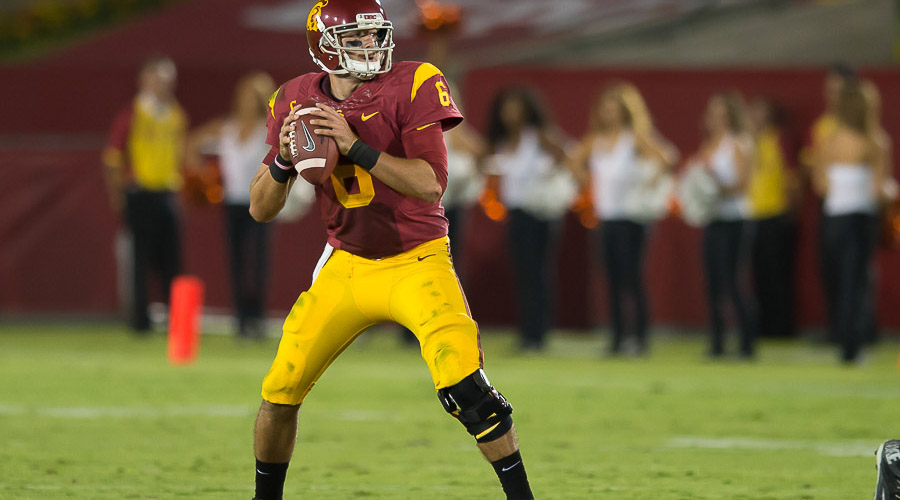 The Obvious: The 2015 USC Trojans Football Media Guide (TFMG) is now available for purchase through the USC Sports Information Department or for downloading.

The Not So Obvious: The cover of this season’s TFMG includes a cardinal and gold photo display of QB Cody Kessler (above photo), LB Su’a Cravens, WR JuJu Smith, C Max Tuerk, CB/WR/RET Adoree’ Jackson. FYI, cost of purchasing a TFMG is $20 through the USC Sports Information Department.

The Obvious: The John McKay Center is considered the “Home of USC football.”

The Not So Obvious: According to the TFMG, the John McKay Center: “Directly west of Heritage Hall on the USC campus is the John McKay Center, a $70 million, 110,000-square foot facility that opened in the summer of 2012. It houses meeting rooms, coaches offices and a locker room for the football program, as well as the Stevens Academic Center (which features tutoring, counseling, study and computer rooms for USC’s student-athletes), a weight room, an athletic training room and a stat production facility for all of USC’s sports.” If it sounds impressive, it’s even more so in person.

The Obvious: After beating Nebraska in the Holiday Bowl in the final game of 2014, head coach Steve Sarkisian said his team’s 9-4 finish was a “total success,” and he is equally optimistic or more so regarding this upcoming season.

The Not So Obvious: In the TFMG, Sark, who recorded more victories than any previous first-year Trojans head coach since 1976, says, “We realize what people’s expectations are for the program and we’re not going to shy away from them, we’re going to embrace them.”

The Obvious: There has been speculation that the Trojans offense is slowly reducing the role of the fullback.

The Not So Obvious: In the TFMG, Steve Sarkisian somewhat addresses that issue by saying, “We are very fortunate to have fullbacks like Soma (Vainuku) and Jahleel (Pinner). They have high football IQs and can do so much for us, which presents a real threat to the defense.”

The Obvious: The Trojans will play at Notre Dame on Oct. 17, and it figures that tickets for the great intersectional rivalry will be again hard to attain.

The Not So Obvious: Well, here’s one option for those that are feeling lucky. Notre Dame is holding a raffle for a pair of tickets to the nation’s premier intersectional rivalry. For those Trojans interested in this exclusive 2015 ND Monogram Club VIP Raffle, go to: https://securelb.imodules.com/s/1210/clubsinterior.aspx?sid=1210&gid=578&pgid=24585&cid=47319

The Obvious: Like all raffles, this Notre Dame/USC Ticket raffle will also include some extra incentives and rewards.

The Not So Obvious: Also included in this VIP experience at Notre Dame (500 tickets at $100 per entry and you can enter more than once) will be a potential grand prize, which will consist of two seats for the game, two pre-game field passes, hotel accommodations for Friday and Saturday nights (Varsity Clubs of America), two tickets to the Friday night reception in the Schivarelli Football Players’ Lounge located in Notre Dame Stadium, one on-campus game-day parking pass, two tickets to the athletic department’s VIP pre-game hospitality village, and a gift bag of Notre Dame Under Armour gear and apparel.

The Not So Obvious: The Notre Dame/USC football raffle will take place on September 25, and the winner of the grand prize will be contacted by the Notre Dame Monogram Club office. Winners must be over the age of 18 years.

The Obvious: It seems as if everybody is giving odds on the 2015 Trojans chances of winning a CFP national title.

The Obvious: The Trojans will play at both Notre Dame and at Oregon in 2015.

The Not So Obvious: Shocking…not. However, the Trojans have had only one Thorpe winner and that was in 1989 by safety Mark Carrier.

The Obvious: A number of Trojans have continued their football passion as coaches after their playing days are over.

The Not So Obvious: The Trojans only Thorpe Award winner, Mark Carrier, is now in his third season as secondary coach of the Cincinnati Bengals.

The Obvious: Former Trojans safety Josh Shaw was selected by the Cincinnati Bengals in the 2015 NFL draft.

The Not So Obvious: Well, you can’t say there isn’t a Trojans family feel with the Cincinnati Bengals. Not only will you have Jose Shaw being coached by Mark Carrier, but also on the club is former Trojans linebacker Rey Maualuga who is now has seven years to his NFL credit. Hard to believe Rey has been in the NFL that long.

The Obvious: The Russell Wilson Passing Academy (RWPA) was held at USC this past Monday.

The Not So Obvious: Wilson, star quarterback of Pete Carroll’s Seattle Seahawks, held other camps in Raleigh (N.C.), Dekalb (Ill.), Madison (Wis.), Burnaby (B.C.), and two camps in Seattle Washington. Obviously one understands the connection for camps in Seattle (Seahawks), Madison (Wilson’s alma mater – Wisconsin), and Los Angeles (Pete Carroll is the former USC head coach). Wilson’s camp was open to 8-17 year-olds. Cost of the camp was $175 per person.

The Obvious: The Trojans will open up the 2016 season by playing Alabama in Dallas, Texas.

The Not So Obvious: Most Trojans fans would agree, UCLA seems to be more interested on what they can sell to the public as opposed to how they look on the field. The Bruins new uniforms are just another reason why the Trojans should basically stay put with what most agree are uniforms that are hard to top.

The Obvious: The Trojans will play at Cal on Oct. 31 and it will be Joe Roth Day.

The Not So Obvious: “Don’t Quit: The Joe Roth Story,” a documentary about the California All-America quarterback who died much too young of cancer at 21, will formally released later this summer. Here is a trailer of The Joe Roth Story: www.youtube.com/watch?v=uXVFue25IrY

The Obvious: Officials from the Bobby Dodd Coach of the Year Foundation and Chick-fil-A Bowl have released their 2015 Dodd Trophy Watch List.

The Not So Obvious: The award goes to the top head coach who represents programs with the highest ideals of leadership, scholarship and integrity on and off the field. Criteria for winning the award: “Sits at the helm of programs with winning records, superior Academic Progress rate (APR) scores and graduation rates, and a strong commitment to service within their communities. Four Pac-12 coaches are on the watch list, and they include Oregon’s Mark Helfrich, UCLA’s Jim Mora, Arizona’s Rich Rodriguez, and Kyle Whittingham. The Trojans Steve Sarkisian is “obviously” not on the list, but he certainly will have his opportunities in the future beginning this season.

The Obvious: And finally, Phil Steele’s nationally respected college football preview has the Trojan ranked No. 8 in his preseason power poll.