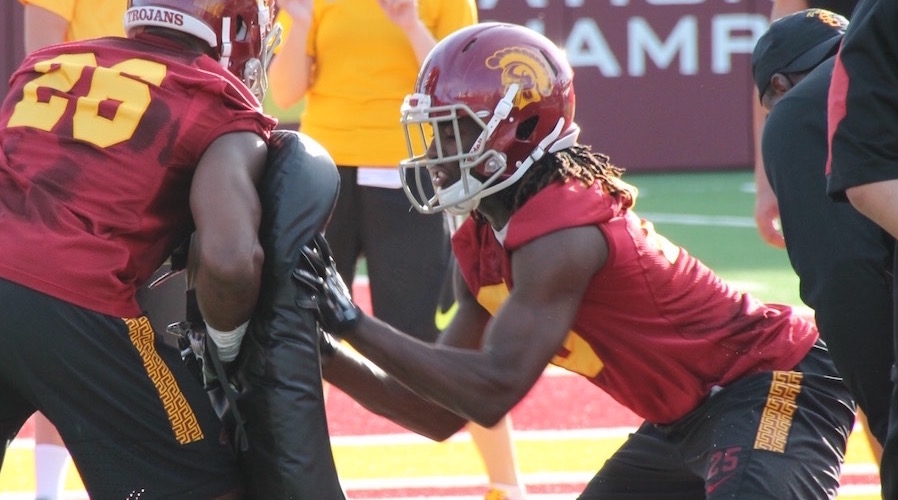 The Obvious: The USC Trojans will complete their first week of spring practice on Saturday on Howard Jones/Brian Kennedy Fields at 10 a.m.

The Not So Obvious: After the first two days of spring practice, there was a heavy emphasis on teaching the game of football along with a major upgrade in discipline. Although he would never indict his predecessors by name, one gets the distinct impression that Clay Helton believes recent Trojans teams have lacked discipline, aggressiveness, and fundamentals. After Thursday’s practice and with respectful emphasis, Helton enthusiastically emphasized to the media, “We are going to be a disciplined team.”

The Obvious: Although Clay Helton has been repeatedly harping on the spring goal of being more disciplined, there are still skeptics that want to see it to believe it.

The Not So Obvious: During Thursday’s 11-on-11practice session, Clay Helton didn’t like the lack of discipline he was seeing at the very start of the session and made the entire team do around five minutes of “up-downs,” which he later confirmed was to continue sending the message to his team that they would be disciplined or else. Believe the old O/NSO, the team got the message.

The Not So Obvious: Nowhere was the term discipline and physicality more evident than when Robinson was working with his running backs on pass blocking. Whether it was veteran running standouts Justin Davis or Ronald Jones ll (above photo on right) or simply role players, Robinson was both in their face and physically demonstrative regarding what he wanted and expected from his backs. As the drill evolved, you could literally see the difference in both the intensity and physicality from Davis and Jones and their attention to disciplined detail. The running backs must have thought they had just joined the Marine Corps.

The Obvious: Ronnie Bradford is the Trojans new secondary coach.

The Not So Obvious: It’s been a while since the O/NSO has seen a Trojans secondary coach bring such intensity to his corners and safeties. With arms waving with high vocal volume, Bradford, like Tommie Robinson, is definitely sending the message of discipline, physicality, and smart technique. No wonder during some practice sessions there were some physical skirmishes between defenders members and wide receivers.

The Obvious: In front of the John McKay Center there is a larger-than-life statue of the legendary John McKay, standing tall and in his famous pose of his left hand on his chin with his right arm horizontally supporting his vertical left arm.

The Not So Obvious: So wouldn’t you know it, at Thursday’s afternoon practice, there was J.K. McKay, the coach’s son and the USC administrator in charge of football, standing in the end zone and giving the exact same famous pose as his father. It must be in the genes.

The Obvious: During the Lane Kiffin and Steve Sarkisian eras, both former head coaches extensively used up to five very large graphic “signs” to tell the offense what to do – an obvious spinoff from the University of Oregon.

The Not So Obvious: During Thursday’s practice, the O/NSO noticed the offense was again using “signs” to direct the offense. When asked after practice about continuing the use of signs, Clay Helton complimented the O/NSO in recognizing not only the continuation of the signs but also noticing that instead of up to five signs the number has been reduced to two or three.

The Obvious: Under previous coaches Lane Kiffin and Steve Sarkisian, music has been a standard at practice.

The Not So Obvious: Well, it’s a new day, a new direction and a new spring, and the rap and other assortment of “tunes” are not currently part of the “cool” atmosphere. It’s all football, according to head coach Clay Helton, and the O/NSO believes Helton’s classroom – while on grass – is now like a classroom inside a building. He wants the full attention of the players and so it’s all about teaching and learning football. Coach John McKay would be pleased.

The Obvious: Most would agree that the Trojans starting quarterback position is really junior Max Browne’s to lose.

The Not So Obvious: Having gone through spring competition the past two seasons with Cody Kessler, Browne certainly knows how the game is played and also any significant changes in the offense. With Clay Helton now totally in charge of the Trojans offensive direction, the offenses from the past – namely those of Lane Kiffin and Steve Sarkisian – is again evolving or as Max Browne said of the new offensive direction, “It’s a little different.” For veteran observers of practice, this offensive evolution may be as fascinating any aspect of spring ball.

The Obvious: Trojans offensive lineman Chad Wheeler is trying hard to retain his starting left tackle position, a position lost during a personal issue that resulted in not being part of the Holiday Bowl.

The Not So Obvious: Given the Trojans very difficult early schedule, it shouldn’t come as a surprise that Wheeler, with a ton of experience, will be given every opportunity to “win back” his starting job. At least in the first couple of practices, Wheeler has been with the first unit at left tackle. However, the fact that All-Pac-12 starting offensive right tackle Zach Banner has been taking some snaps at left tackle should send a message to Wheeler that his return to starting left tackle isn’t a formality.

The Obvious: There has been much ballyhoo regarding new offensive line coach Neil Callaway.

The Not So Obvious: Thus far, Callaway is living up to his reputation as an “old school” and a no nonsense coach. He appears to have a defensive line coach mentality, and you get the impression he believes there is a lot this group of Trojans offensive linemen need to learn. Callaway says his linemen need to play harder and with much more intensity, and you’d have to think he, too, wasn’t too thrilled with what he watched on film analysis of last season’s OL intensity.

The Obvious: Gardena (Calif.) Serra offensive tackle Wyatt Davis is a high priority recruit for the Class of 2017 who attended the recently held USC Junior Day.

The Obvious: Wyatt Davis reportedly will have his choice of college to play football.

The Not So Obvious: Davis told the O/NSO, “I love USC. I mean I really don’t have any top schools right now, but they (USC) are definitely always going to be up when I make a decision just because it’s close to home. I loved my time at USC when I was down there on Friday.”

The Obvious: The USC coaching staff would love to see Wyatt Davis become a Trojan.

The Not So Obvious: Regarding when he might commit, Davis told the O/NSO, “I was thinking signing day, but I think that just might be too much. I don’t know. It might be before spring. If it’s not before spring, I might do the signing day deal.”

The Obvious: One of the most electrifying wide receiver for the Class of 2017 is Corona (Calif.) Centennial wide receiver Tyjon Lindsey, who visited USC on Junior Day.

The Not So Obvious: Regarding his thoughts on USC Junior Day, Lindsey told the O/NSO, “I just seen a lot of new guys I’ve never seen. The experience was great as always, and it made be feel back at home. I learned where they would put me and everything, and how they’d use me so I am very humbled that they would think of me like that.”

The Obvious: Tyjon Lindsey, too, has his choice of colleges, and the Trojans are, according to Lindsey, positioned to be in the thick of his recruiting race.

The Not So Obvious: Upon being on the USC campus, Lindsey told the O/NSO, “It’s just being back at home, and you know they’re going to be high my list as always.”

The Obvious: Like all high valued recruits, Tyjon Lindsey’s day of decision will be closely monitored.

The Not So Obvious: As for a commitment announcement, Lindsey told the O/NSO, “I am planning on committing sometime in the summer; I am not trying to let the process getting hectic or anything.”

The Obvious: And finally, originally weekday Trojans practices for the spring were scheduled for 3:30 p.m.

The Not So Obvious: A USC official informed media member said Thursday that weekday practices have now been rescheduled for 3:00 p.m.