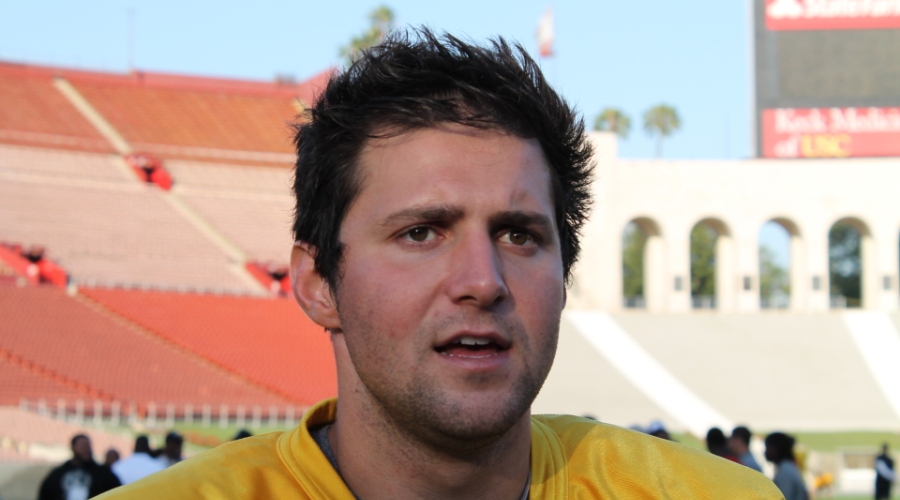 The Obvious: The 2015 Pac-12 Football Media Day location has been announced, and it will take place on July 30-31 at Warner Brothers Studios, a studio first founded by brothers Harry, Albert, Sam, and Jack Warner.

The Not So Obvious: Well, the Pac-12 Football Media Day tour of movie studios continues. We’ve now had Fox, Sony, Universal, and Paramount Studios. There is only one studio left, and it’s next door to Warner Brothers. Perhaps the name Disney Studios rings a bell?

The Not So Obvious: One thing that Sark knows about Kessler and Cravens, there won’t be any slips of the tongue from either of them when it comes to answering any loaded questions. They are well trained but still come across as genuine. Both are actually favorites of the local media that cover the Trojans because they are quotable and give sincere but not inflaming answers.

The Obvious: The Pac-12 Football Media Day seems to reinvent itself on a yearly basis by bypassing the usual questions and answer session from a traditional audience format.

The Not So Obvious: The O/NSO had to laugh when the Pac-12 announced that Coaches and student-athletes from Arizona State, Colorado, Oregon State, Stanford, UCLA and Washington will conduct interviews with Pac-12 television partners (Pac-12 Networks, ESPN and FOX) and will not be available to the print media before lunch, which at that point it will be one-on-one interviews during lunch time.

The Obvious: The Pac-12 has a new supervisor of football officiating in David Coleman.

The Not So Obvious: For those that tune in on TV or the stream on computer for the first day of Pac-12 Football Media Day, you will be able to hear new supervisor Coleman, officially called the Pac-12 VIP of Officiating, at 8:30 a.m. PDT. Perhaps David can explain his vision for calling games this season so it matches the perfection of the Big Ten and SEC.

The Obvious: Former Trojans Heisman Trophy winning quarterback Matt Leinart is on the ballot for the College Football Hall of Fame.

The Not So Obvious: FYI, The National Football Foundation will announce the results of the recent voting on Friday, Jan. 8, 2016 live from the Camelback Inn in Scottsdale, Ariz., which is serving as the media hotel for the Jan. 11 College Football Playoff National Championship Game.

The Obvious: The Coliseum is home to the USC Trojans football team.

The Not So Obvious: The O/NSO highly recommends those fans that would like to see the “real” Coliseum, as tours are now available to the general public and fans can get an inside look into the locker room, press box, and new recruiting lounge. Tours are available Tuesday-Saturday at 10:30 a.m. and 1:30 p.m. ($25 per person for a guided tour, $10 for a self-guided tour. The 90-minute tour beings in the famous Peristyle end of “The Coli.” Advance tickets available at Ticketmaster or the Coliseum Tour Ticket Booth at Gate 28.

The Obvious: One of the most exciting moments before the Trojans take the field in the Coliseum is when the Men of Troy run out of that famous tunnel.

The Not So Obvious: As part of the Coliseum tour, fans will be allowed to run out from the tunnel to the field. That alone is worth the price of admission, considering how many great athletes have done the same thing.

The Obvious: The Trojans play at Notre Dame on Oct. 17.

The Not So Obvious: Because they only had one player (tight end Ben Koyack in the seventh round) drafted into the NFL back in April, word out of South Bend is that the Irish believe the large returning numbers will make them a better team. Well, after last season’s Trojans beating, 49-14, in the Coliseum, they’d better be improved.

The Obvious: Pete Carroll was recently inducted into the USC Athletic Hall of Fame.

The Not So Obvious: Perhaps taking a cue from the Trojans, former Ohio State football head coach Jim Tressel, now Youngstown State University president, will be inducted into the Buckeyes Hall of Fame.

The Obvious: Unlike Pete Carroll, who elected to return to the NFL while the NCAA was pursuing the Reggie Bush episode, Jim Tressel resigned in May 2011 after the NCAA discovered the former Buckeyes coach had, for lack of a better word, withheld information during an investigation into some of his players selling memorabilia and receiving illegal benefits.

The Not So Obvious: To compare the two coaches and their situations would be foolhardy. It should be noted that Carroll was never accused by the NCAA of any wrongdoing.

The Obvious: One of the true freshmen working out in the USC players’ volunteer sessions is incoming San Clemente High quarterback Sam Darnold.

The Not So Obvious: This week, Darnold was named the Orange County Male Athlete of the Year by the OC Register for his football and basketball accomplishments. Sam led the Tritons to the Southwest Division football title game while setting school passing records and was the South Coast League co-MVP in basketball.

The Obvious: The USC Trojans will hold its prestigious Rising Stars Camp on June 24&25 on campus.

The Not So Obvious: This is the most important “fundamentals” camp for prospective USC recruits, and it’s more common than uncommon that some lucky schoolboy phenom will get offered a ride. The camp brings together elite returning high school prospects, a number of whom are from out of state. If a player is looking get a scholarship from USC, he better get his mouthpiece on campus especially if the coaches have requested your presence.

The Obvious: It’s never too early for Trojans fans to think about planning for a post-season bowl game.

The Not So Obvious: The College Football Playoff and ESPN announced the start times for the New Year’s bowl games. On Dec. 31, the playoff semifinals at the Goodyear Cotton Bowl Classic and Capital One Orange Bowl will begin at 4 p.m. and 8 p.m. ET, while the Chick-fil-A Peach Bowl will begin at Noon. On Jan. 1, the Fiesta Bowl will kick off at 1 p.m. ET, followed by the Rose Bowl Game presented by Northwestern Mutual at 5 p.m. and the Allstate Sugar Bowl at 8:30 p.m.

The Obvious: And finally, sometimes you need a time zone translator to know when in-season and bowl games will kickoff, especially when you live in Pac-12 country and on the West Coast.

The Not So Obvious: As an O/NSO public service message because if the Trojans make the College Football Playoff with a little skill and luck, the West Coast television start times for the Dec. 31 CFP semifinals at the Goodyear Cotton Bowl Classic and Capital One Orange Bowl will be 1 p.m. and 5 p.m., respectively.