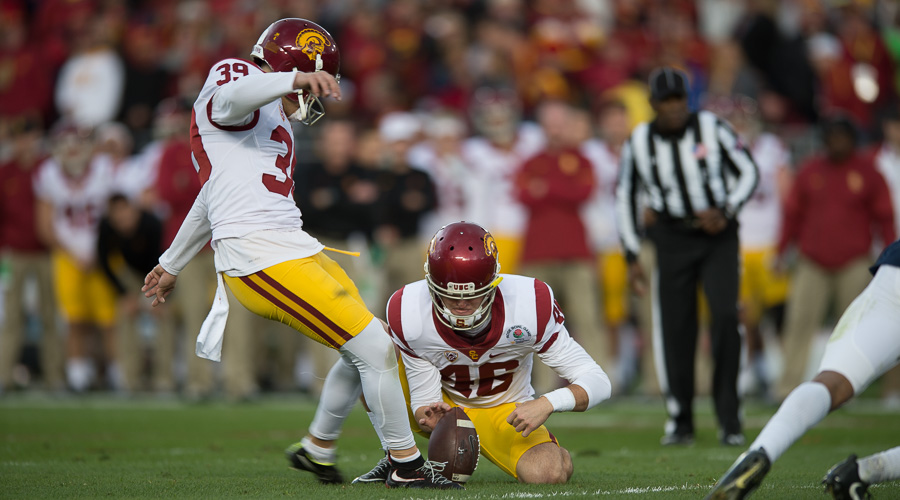 The Obvious: With the commencement of this weekend’s huge recruiting effort in the John McKay Center, there is simultaneously another aggressive recruiting drive underway. Showing an early, hard-hitting marketing campaign, season ticket renewal applications for the highly-anticipated 2017 football season were disbursed through email this week, thus taking advantage of the Trojans thrilling 52-49 triumph over Penn State in the Rose Bowl.

The Not So Obvious: To add a little drama and excitement to the email renewal season ticket application email was an accompanying video of Trojans junior placekicker Matt Boermeester (photo above) connecting on his Rose Bowl-winning 46-yard field goal against the Nittany Lions with no time remaining.

The Obvious: The 2017 Trojans home football schedule features seven home games and includes the likes of Texas, Stanford, Utah, and UCLA along with foes Western Michigan, Arizona, and Oregon State.

The Not So Obvious: Included in the renewal season ticket application was the opportunity to purchase a limited edition 2017 Rose Bowl poster, which included various game-action photos and a middle photo of head coach Clay Helton holding up the Rose Bowl winning team trophy. Cost of the poster is $25.

The Obvious: It figured with the Trojans 2016 team success, lofty post-season rankings, and the hype of a potential national championship run in 2017, the USC Ticket Department would take full advantage of a financial and marketing opportunity.

The Obvious: Given that the Trojans played football into the first week of January, it won’t be long until March and the commencement of spring football practice on campus.

The Not So Obvious: The Coliseum spring game is scheduled for Saturday, April 15.

The Not So Obvious: The O/NSO can’t recall a Trojans season which went from such rags to riches when it counted except maybe Pete Carroll’s 2002 Trojans, which started off 3-2, finished 11-2, and capped it all off with a 38-17 Orange Bowl domination of No. 3 Iowa. As for 2016, that 52-6 beating by Alabama back in September couldn’t have possibly foreshadowed where things would be in January. To think in the final AP Top 25 the Trojans finished one spot below the Crimson Tide is a real eye-opener. No doubt, this past season will be used as an instructional tool by Clay Helton and by future USC head football coaches.

The Obvious: The Trojans accomplished their first 10-win season since 2013.

The Not So Obvious: That 2013 USC season was satisfying because the Trojans went through the coaching fiasco of firing Lane Kiffin after five games, the resignation of interim head coach Ed Orgeron before the Las Vegas Bowl, and the eventual elevation of Clay Helton as interim coach for the bowl game. Given the circumstances back then, the Trojans were just happy to play in a bowl game. Conversely, the 2016 Trojans were under enormous pressure after the Alabama devastation and looked to be dead in the water, but resurrected their season against all odds.

The Obvious: The Trojans also finished the 2016 football season ranked in a number of Top 20 statistical categories.

The Obvious: In the AP’s final poll, Pac-12 rival Washington was ranked No. 4 right behind the Trojans.

The Obvious: Being ranked No. 3 in the final AP Top 25 will be put to immediate use in the final weeks of the Trojans recruiting drive for the Class of 2017.

The Not So Obvious: How fast? About as fast as you can send a tweet, which means the message was sent out to recruits within two hours of Tuesday’s announcement.

The Obvious: As mentioned, the Trojans finished No. 5 in the Amway Coaches Poll.

The Not So Obvious: The O/NSO is still scratching the cranium over the fact that Washington finished No. 4 ahead of the Trojans despite the cardinal and gold dominating the Huskies in Seattle.

The Obvious: Three-time Trojans All-American first team quarterback Matt Leinart, the 2004 Heisman Trophy winner, who led the Trojans to a couple of national championships, has been named to the 13-member 2017 College Football Hall of Fame Class and will be inducted at a Dec. 5 dinner in New York City.

The Not So Obvious: Every Trojan has their favorite Matt Leinart moment, and the O/NSO’s favorite is the immortal “4th & 9” call late in the fourth quarter at Notre Dame, a pass completion to wide receiver Dwayne Jarrett that is etched in the minds of all Trojans. It was ironic that the newest member of the College Football Hall of Fame was also part of a float in the recent Rose Parade in Pasadena.

The Obvious: Matt Leinart is the 43rd inductee with USC ties, including 32 players, in the College Football Hall of Fame.

The Not So Obvious: A Trojan has been elected into the CFHOF in 12 of the past 18 years. Prior to Leinart’s entrance into the CFHOF, the last Trojan named was former Trojans All-America end Hal Bedsole in 2012. Speaking of “Big Hal,” Trojan fans saw No. 19’s name above one of the Rose Bowl tunnels next to the Rose Bowl press box entrance in honor of the superstar receiver.

The Obvious: Matt Leinart was a first-round choice of the Arizona Cardinals in the 2006 NFL draft.

The Not So Obvious: Although he had a modest pro career (8 seasons) at best, Leinart is unquestionably one of college football’s all-time greats and had the Trojans defeated Texas in the 2006 Rose Bowl game for the BCS National Championship, “Lefty” might have arguably been considered the greatest college football player of all-time.

The Obvious: Many college superstars are judged by what they ultimately accomplish in the National Football League.

The Not So Obvious: It’s a shame that some wish to define Matt Leinart’s career by what happened in the NFL where he threw 15 TD passes. The beauty of college football is that some players are absolute superstars at the collegiate level and can remain superstars – like Leinart – in the eyes of college football fans long after their NFL playing career is over.

The Obvious: Two other Trojans on this year’s College Football Hall of Fame ballot, safeties Troy Polamalu and Mark Carrier, were not elected to this year’s class.

The Not So Obvious: Fear not, it figures at some point one or both former Trojans will be named. There are players in the CFHOF that were much less productive the two former USC All-Americans.

The Not So Obvious: Yes, that’s former Dodgers outfielder and World Series hero Kirk Gibson who was just voted into the CFHOF, and for older Trojans fans, you probably remember when Michigan State and Gibson came to the Coliseum in 1978 to face the eventual national champion Trojans. For the record, the Trojans crushed Kirk’s Spartans 30-9.

The Obvious: Trojans QB Sam Darnold has been named a 2016 First Team Freshman All-American by the Football Writers Association of America.

The Not So Obvious: Oh hum, another day another award for Sammy. Most publications are now on record as saying that the Trojans quarterback prodigy is the frontrunner for the 2017 Heisman Trophy. It’s a long way from here to New York City in December, but it’s certainly well-earned in terms of the preseason hype.

The Not So Obvious: It certainly makes a return for A.J.’s senior year look a little more possible. There also is a rumor that Jackson has taken out an insurance policy for his collegiate career. If you add those two items, maybe Adoree’ will return for a final encore. Returning for his senior season certainly didn’t hurt Matt Leinart from getting into the College Football Hall of Fame.

The Obvious: The Trojans are in the recruiting hunt for high-valued defensive tackle Aubrey Soloman from Lee Country High (Leesburg, Georgia).

The Not So Obvious: Aside from the fact the Trojans have historically done well in recruiting Georgia, Soloman says he has roots in California (Fresno), which could be considered a plus. Of course, another good reason to come to USC is that the Trojans are in real need for defensive linemen. Then again, Soloman recently said that Alabama is his clear-cut frontrunner and no explanation is needed. But anything can happen on an official visit to turn a head.

The Not So Obvious: While this will be a great start for these four outstanding prospects come spring ball, they’ll be just as valuable with their on-campus presence during the upcoming recruiting weekends.

The Obvious: And finally, before this season’s Rose Bowl, it had been a while (2009) since the Trojans last played in the “Granddaddy of Them All.”

The Not So Obvious: With a victory over Penn State in the 2017 Rose Bowl, the Trojans are bursting with pride and have decided to “tour” the Rose Bowl winner’s trophy, the Leishman Award. On Thursday, the award was in the USC Bookstore on the University Park Campus, today (Friday) it’s at the USC Bookstore at the Health Sciences Campus (11:30 a.m. – 1:30 p.m.), and on Saturday, the trophy will be on display at the Trojan Town South Coast Plaza (noon to 4 p.m.).