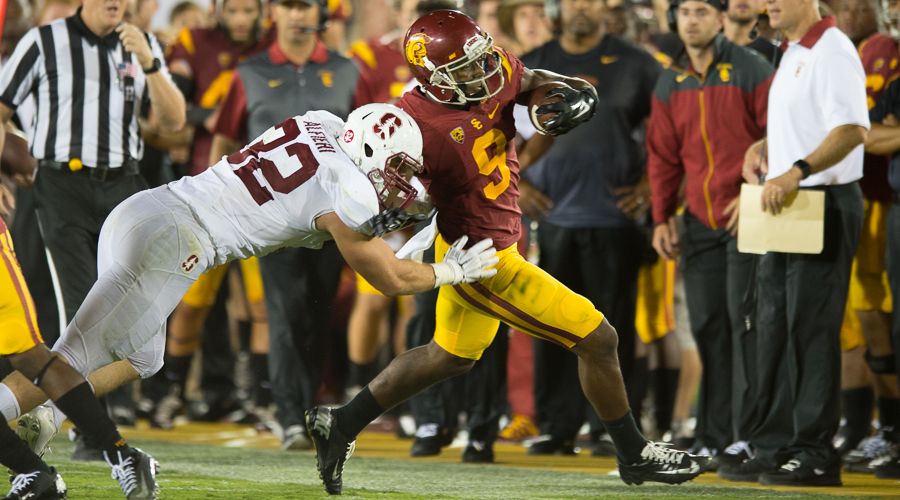 It’s game day and there is a morning media event and then the afternoon pregame. Here is Part 2 of the On the Trojans Pac-12 Championship Game Road with a media breakfast, which included the thoughts of Pac-12 Network analysts before today’s game at Levi’s Stadium.

7:00 a.m.: Wake up, baby, it’s big game day – the Trojans and Stanford for the Pac-12 title and a bid to the Rose Bowl! There will be no oat bran traditional breakfast this morning since I have no oat bran, and there is no microwave to cook it. Instead, the Pac-12 is having a breakfast for the media at 9:00, which will not only provide food but pregame analysis from Pac-12 Network personalities like former Trojans wide receiver great Curtis Conway and former Oregon defensive coordinator Nick Aliotti.

8:00: Take the elevator down to the second floor, which is the location of the Pac-12 media room to get my credentials. Instead of renting a car for today’s festivities, I will shuttle later from the Marriott to Levi’s Stadium. The goal is to take a 1 p.m. shuttle to be at the stadium in plenty of time to watch the pregame recognition ceremony for the Pac-12 All-Century Team, which includes many former Trojans.

8:15: The Pac-12 media room is quiet with two conference reps handling the credentials. They remind me of the shuttle bus times to Levi’s Stadium.

8:30: Head down to the first floor and over to the “Arcadia Room” for a private buffet breakfast. There are a number of Trojans fans eating at the breakfast buffet. I shouldn’t have been surprised that there was no media there. However, the waitresses said to go ahead and hit the breakfast buffet. The buffet includes scrambled eggs, pancakes, fruit, potatoes, bagels, muffins, and basic cereal. I know, the “Princess of Nutrition” will ground me if I don’t eat correctly.

9:00: Members of the Pac-12 Conference arrive and to my surprise old friend Kirk Reynolds comes up to say high. I’ve known Kirk from his SID days at UCSB. Kirk left the Gauchos to work for the 49ers, and now is part of the Pac-12 Networks and directed the All-Century team for the conference. Naturally, he is excited about today’s championship game and doesn’t honestly know who will win. I see another old acquaintance in Mark Whicker, formerly with the OC Register and now with the Daily News. Whicker thinks the Trojans will have to beat Stanford at its own game, which I agree. Be physical and play ball control.

9:10: Former Oregon defensive coordinator Nick Aliotti sits next to me, and we hit it off like two former coaches, which we were. Nick is old school and now in “retirement” works as an analyst for the Pac-12 Networks. We are about the same age – early oldies – and Nick thinks that the old USC McKay offense would still work wonderfully with the type of players the Trojans recruit. Bring back student body right!

9:15: Aliotti discusses the game with Whicker and your trusted scribe and is very open in his comments after the game. Nick says, “I think the Stanford offensive and defensive lines are superior to the Trojans. However, if the Trojans can get explosion plays on offense, they can win. I love Robert Jones and JuJu. I think if the Trojans can get those big scoring plays and play solid defense they can do it. It’s if the Trojans will play hard on every down. I need to see that.”

9:30: The course of the conversation with Aliotti turns to the Trojans newly named head coach Clay Helton. Aliotti says, “I like Clay Helton. There is, however, a difference between being an interim head coach and being the head coach. When you are the interim, you are everybody’s best friend and when you are the permanent head coach things change. I like the direction he is taking the Trojans. I can’t wait to see how far this team has advanced physically since the Notre Dame game.”

9:50: Former Trojans assistant coach Yogi Roth comes in and sits with some of the conference public relations people. Former Trojans wide receiver great Curtis Conway is also in the house wearing a baseball cap and holding court with another journalist.

10:00: Aliotti continues with his dissection of the game. He thinks that the Stanford offense is so different that than the rest of the conference that they have an advantage in that teams don’t practice against it much like when the Wishbone was in vogue. He thinks that the Trojans and Stanford offenses win games because of time of possession (Stanford lead the nation in TOP), which helps the defense having to play so many snaps.

10:30: Sit down for a one-on-on with Curtis Conway, and he is excited about the game. Conway says, “I like this matchup of teams. Stanford we know about and deserves to be in the game, but considering the Trojans turmoil during the season to be in this position is remarkable. The kids deserve a pat on the back.”

10:35: Conway continues with his analysis. The former receiving great says, “To win, the Trojans have to get their defense off the field. The Trojans offense has to be put into third and short yardage situations, which is what Stanford likes to do. I think the key on offense for the Trojans is the offensive line. Clay wants to pound the ball and limit the number of snaps for the Stanford offense. Stanford won’t change much on defense. David Shaw is a great coach and knows how to attack the Trojans defense.”

10:40: I bring up the new physical nature of the Trojans team, and I ask Conway how does a team suddenly become a physical team in the middle of the season after being groomed as a finesse team? Conway says, “It’s true the Trojans under Sarkisian were a finesse team. However, these Trojans players may have been physical players all along, but the previous style didn’t let them play that way. So they have been physical players all along. I think today will be a real test of this possibility. SC will be physical today and the kids like it.”

10:50: Some of the media starts to depart as I continue my discussion with Conway. Conway adds, “ I think the key is the Trojans offensive line on offense and the difference could be the Trojans playmakers. On defense, the Trojans corners, Adoree’ (Jackson) and (Iman) Marshall will be critical. You can bet that David Shaw will go after Marshall. It’s how the Trojans do against the Stanford receivers like Devon Cajuste and Michael Rector. How Marshall does when Stanford does it’s play-action will be important. And, of course, it’s also how they handle (running back) Christian McCaffrey.”

11:10: The private room of the Pac-12 Breakfast Club adjourns and everybody returns to their rooms to get ready to head over to Levi’s Stadium. Next up, the On the Pac-12 Championship Game Road with the pregame from Levi’s Stadium.