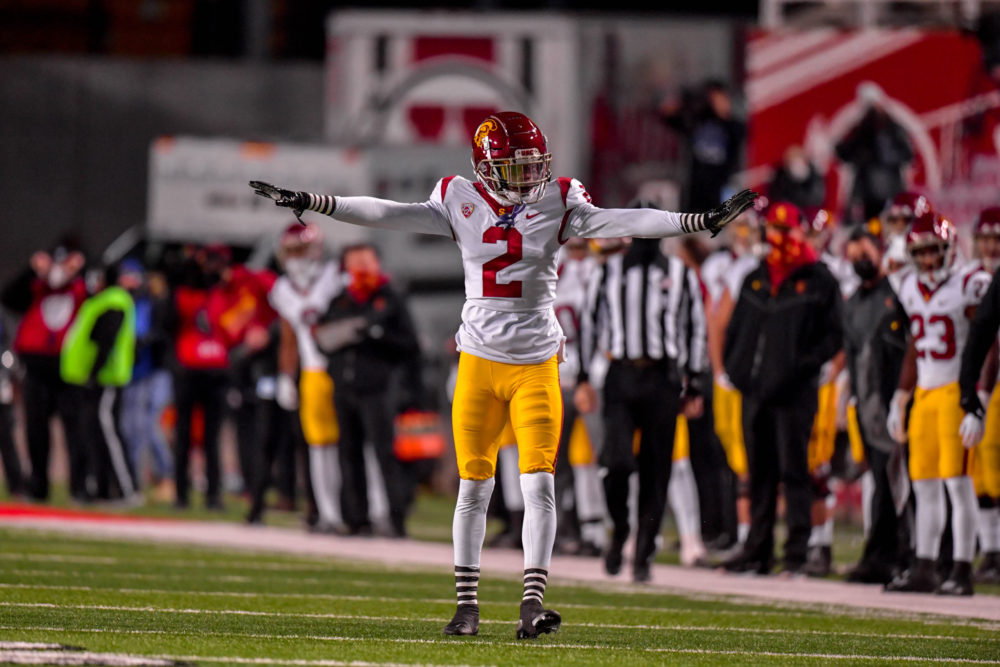 Early Friday morning, Cornerback Olaijah Griffin became the fourth USC Trojans to announce he would leave school early and make him self available for the 2021 NFL Draft.

Griffin said the call to stay or go had been something he’d been wrestling with for two solid weeks and spent a lot of time talking through things with his parents before landing on his ultimate decision.

The announcement completes Griffin’s three-year plan he had for himself upon arriving to USC and starts the next process of NFL Combine and NFL Draft prep.

Griffin was asked to step his game up this year for the Trojans and he responded. Under defensive coordinator Todd Orlando and cornerbacks coach Donte Williams, Griffin was tasked with playing the field corner, asked to hold up on an island in one-on-one coverage over a massive area. He became part of a defensive backfield that allowed the fewest passing yards per game for the Trojans since the 2013 season.

“I feel like coach Donte has played a role in my football career just being there for one year,” Griffin said. “He showed me how to play at an NFL standpoint.”

Despite all the ups and downs, stops and starts that everybody dealt with during this 2020 season, Griffin called it both the toughest and also the best year he’s had in his football career. It’s a bittersweet finish for Trojan fans — as it has been for all the early entrants — as USC fans weren’t able to see Griffin or the others over a full final season, but Griffin said he wouldn’t change anything about his time at USC.

“Being at ‘SC for those three years gave me a great experience,” Griffin said. “It was just how I envisioned it and my dream coming to reality. Being able to play where the people I looked up to play, having my dream come true, it’s just unreal…Everything I’ve experienced at ‘SC I wouldn’t change. I wouldn’t be in the position I am today without it. It gave me all the resources I need, the education, the knowledge, having coaches there for me. It put me in the position I am today.”

Griffin said he spoke with both Williams and head coach Clay Helton after making his decision and both said they were proud of him.

“No matter what, they’ll always be on my side,” Griffin said of what his coaches told him.

While he wasn’t seen as a sure thing to declare early for the draft entering this season, Griffin saw enough progress in his game over the shortened season to believe he can successfully make the transition to the next level right now. He was selected as a Pac-12 Honorable Mention following the season and Pro Football Focus ranked him as the No. 3 cornerback in the conference. Griffin recorded the first interception of his career this season, against Washington State, and had 22 tackles and four pass deflections.

“I gained a lot of knowledge of the position, where my help is on the field, what we have to do, and all my responsibilities,” Griffin said. “I’m very confident in that. I know how to make plays if they actually throw to me.”

Griffin could be the next former Trojan to sign with Athletes First, after Jay Tufele did so back in August. Then it’ll be focus on preparing for the combine.

He’s ready for the critiques that will be coming his way, as he understands that his decision, his body of work and his NFL potential will be scrutinized from every angle, as they will be for many early entrants this year.

“I think they’ll criticize my strength and that should be it,” Griffin said. “I feel like I can hang with anybody on the football field. Strength doesn’t have anything to do with how I play…Honestly I think I’m betting on myself and I think I’m ready for the next level.”

Friday was an important day to make this announcement for Griffin, as January 1 is his grandmother’s birthday. She passed away shortly after he began playing football as a child, but this day remains a special one for him.

On Thursday, the decision was still settling in for Griffin as he came to terms with taking that next step in his football career.

“It felt like I just committed to college again,” Griffin said. “It feels unreal. I wanted to run around and start doing pushups. I wanted to get out on the field.”

At 6-foot and 180 pounds, Olaijah (“O.G.”) Griffin has fluid hips, balanced feet and is skilled with eye-hand coordination. The University of Southern California Trojans benefited from Griffin’s exceptional talent by often lining him up against the opponents best No. 1 reciever threat.

In the condensed pandemic six-game season, Griffin was only targeted by opponents 10 times while accumulating 22 tackles, one tackle for loss, four pass break ups and one interception.

As a cornerback, Griffin can play on the left or right side, field or boundary. That’s a feat that is often difficult because of the demand on your body to plant off of a dominant leg while seeing the ball travel from left to right across the body.

The ability to cover press man and have the football IQ to play off man read route concepts identified through film study is what will distinguish Griffin as he looks to improve upon an early NFL Scout evaluation grade as a 4th through 7th round prospect. Once teams have had the chance to rewatch his game film they will notice that his technique comes from the Seattle Seahawks (Pete Carroll) tree of teaching fundamental Kick Step-Pure Step press technique.

A technique widely adopted by nearly 1/3rd of the NFL. In a pandemic-shortened season, where travel restrictions may prevent NFL teams from maximizing their evaluation of college talent and technique; film evaluation may prove to be the difference in how teams will make their determination of which draft-eligible prospects can best translate their skill sets and adjust to the learning curve of being taught new defensive philosophies, terminologies and techniques when in-person training may be limited due to Covid-19 protocols implemented nationwide.

The timing of Griffin’s decision to forgo his collegiate career to embrace his childhood dream of playing in the National Football League comes with great contemplation. How much more could he benefit from returning to the University of Southern California? How much more prepared could he become by returning to USC?

These questions have been considered and factored by Griffin, but he’s willing to bet on himself in moving forward.

In summary, Griffin possess the moxie, tenacity, and determination to compete in the National Football League. His ability to play in man or zone coverages, single safety high or two-high-safety defensive concepts will allow Griffin to adjust quickly to the demands placed on defenders by the NFL.

USC would have been in terrific shape next year by bringing back both Griffin and Chris Steele on the outside as the Trojans looked for a replacement for Talanoa Hufanga at safety. Instead, the Trojans will have a couple of holes to fill in the defensive backfield now.

Isaac Taylor-Stuart will likely be the next guy up at cornerback, though it will be interesting to see if maybe someone like Max Williams or Greg Johnson gets a shot at moving from nickel/safety out to outside cornerback. USC also has Dorian Hewett, Adonis Otey and Jayden Williams, who could all get looks in the spring.

But this might be an opportunity for a true freshman to make a big jump into a starting spot or rotational role. Prophet Brown has already signed with USC and four-star corner Ceyair Wright is set to announce his decision on Saturday, Jan. 2. If he signs with the Trojans, he’ll likely be given a shot at grabbing the spot as Williams will certainly open the competition up to everybody in his position room.

Griffin joins Tufele, Hufanga and offensive tackle Alijah Vera-Tucker as Trojans who have declared early for the 2021 NFL Draft. Additional decisions whether to stay or go will likely come from wide receivers Amon-Ra St. Brown and Tyler Vaughns, as well as defensive tackle Marlon Tuipulotu and safety Isaiah Pola Mao, as USC learns what kind of rebuilding or reloading job awaits the coaches during spring ball and in preparation for the 2021 season.