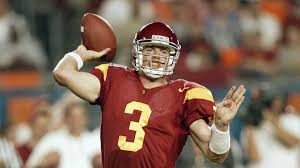 The Obvious: With all the NCAA Transfer Portal comings and goings in the world of USC football, it’s been almost overlooked that on Monday the National Football Foundation (NFF) & College Hall of Fame announced the names on the 2020 ballot for induction into the College Football Hall of Fame.

The Not So Obvious: Among the Trojans on the prestigious list are quarterback Carson Palmer (photo above)and safeties Mark Carrier and Dennis Thurman.

The Obvious: Steve Hatchell is the NFF President & CEO.

The Not So Obvious: Hatchell said, “It’s an enormous honor to just be on the College Football Hall of Fame ballot when you think that more than 5.33 million people have played college football and only 1,010 players have been inducted. The Hall’s requirement of being a First-Team All-American creates a much smaller pool of about 1,500 individuals who are even eligible. Being in today’s elite group means an individual is truly among the greatest to have ever played the game, and we look forward to announcing the 2020 College Football Hall of Fame Class in January.”

The Obvious: Quarterback Carson Palmer played for the Trojans from 1998-2002.

The Not So Obvious: Palmer’s college resume includes being a 2002 consensus First Team All-American and Heisman Trophy recipient, 2002 Pac-10 Co-Offensive Player of the Year who set conference/school career records for total offense (11,621 yds) and passing yards (11,818), and led the Trojans to a share of the 2002 Pac-10 title and first 11-win season since 1979. The former Santa Margarita (Calif.) Catholic High School superstar is probably the best bet of the currently nominated Trojans to enter the College Football HOF.

The Obvious: Norm Chow is considered one of college football’s all-time offensive coordinators and quarterback coach.

The Not So Obvious: Until Chow arrived along with head coach Pete Carroll in 2001, it appeared that Carson Palmer’s career was going to be another heralded high school phenom who would never reach his full collegiate potential. With Chow’s mentoring, it seemed like Palmer’s USC career made a 180-degree turnaround, and Carson went from raw potential to realizing his ceiling. The rest, of course, is now history. One thing is obvious: A coach and system can make a difference, and it certainly did in the Carson Palmer story.

The Obvious: One of college football’s greatest rivalries is USC and Notre Dame.

The Not So Obvious: There are many that would agree that Carson Palmer sealed the Heisman Trophy Award when the Trojans dominated the Irish in the Coliseum in 2002 before a national television audience with Keith Jackson calling the play-by-play. Here is a reminder of that eventful evening: https://www.youtube.com/watch?v=Mf691KDKbOQ

The Obvious: Safety Mark Carrier played for the Trojans from 1987-89.

The Not So Obvious: Carrier’s college resume’ includes being a two-time first team All-American (1988-89) – unanimous in 1989, Jim Thorpe Award winner (1989), two-time first team All-Conference selection, and leading the Pac-10 in interceptions in 1989 with seven. Carrier has been nominated before and his credentials should be enough to get him into the College Football HOF, but the question is when?

The Obvious: Mark Carrier is yet another from a long line of great prep players out of Long Beach (Calif.) Poly High that have had an outstanding career at the University of Southern California.

The Not So Obvious: When Carrier arrived at USC, the one thing that really stood out besides his ability to roam a secondary like a velociraptor was his well-beyond-his-years maturity. In talking with Mark many times both on and off the field, he was never your typical freshman in terms of taking responsibility and dealing with the off-the-field life of a college student.

The Obvious: Mark Carrier’s college and pro football careers were a huge success, and he went on to coach both in college and the NFL.

The Not So Obvious: In his USC career, Carrier played in three bowl games. Here is his final game as a Trojan in the 1990 Rose Bowl game against Michigan, a game won by the Trojans 17-10. Mark is wearing his familiar No. 7:https://www.youtube.com/watch?v=aLejdMYgeQQ

The Obvious: Safety Dennis Thurman played for the Trojans from 1974-77.

The Not So Obvious: Thurman’s college resume includes being atwo-time first team All-American, who led his Trojans to four consecutive postseason wins, including the 1974 National Championship at the Rose Bowl. Dennis was also a two-time all-conference selection who helped Troy to two Pac-10 titles.

The Not So Obvious: The O/NSO first met Dennis when we were doing radio play-by-play for the old North-South Shrine Prep All-Star Football Game. A couple of things stood out in the first introduction. The former SAMO High superstar had the confidence of an NFL veteran and wasn’t shy in expressing it. He was different but not in an overly cocky attitude sort of way. One got the sense that football was going to take him beyond his own playing days to perhaps a transition into coaching. In retrospect, Dennis certainly had a great career in both college and the NFL, and he did eventually become a coach and coordinator in the NFL.

The Obvious: Dennis Thurman was known for being a vicious hitter both at USC and in the NFL.

The Not So Obvious: Here is a brief video of Dennis wearing No. 32 as a Dallas Cowboy safety and putting a lethal and controversial hit on the Eagles’ wide receiver Harold Carmichael: https://www.youtube.com/watch?v=s5piwM2ZhMA

The Obvious: And finally, the College Football Playoff (CFP) National Championship will be played in New Orleans.

The Not So Obvious: The College Football HOF announcement of the 2020 Class will be made in January 2020 in the days leading up to the College Football Playoff (CFP) National Championship in New Orleans. The January announcement will be televised and/or streamed live. Several of the selected will also participate in the pregame festivities and the coin toss before the championship game.