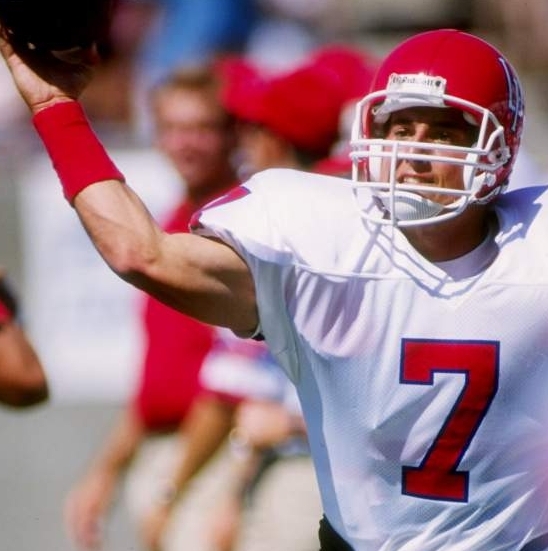 The Obvious: During the past generation, the USC Trojans have been righteously called Quarterback U, honoring such illustrious signal calling names as Heisman Trophy winners Carson Palmer and Matt Leinart, and a headlining list of former and current first team All-Pac-12 quarterbacks such as John David Booty, Mark Sanchez, Matt Barkley, Sam Darnold, and the current chosen one, Kedon Slovis.

The Not So Obvious: The irony of all those great Trojans quarterbacks within the past 25 seasons comes the revelation that the current USC coaching staff features six former quarterbacks, including head coach Clay Helton (cover photo above at the University of Houston), and seven if you wish to stretch it a bit to include USC athletic director Mike Bohn. So, let’s take a moment to look at Helton and his staff collection of former throwers.

The Not So Obvious: Helton played quarterback at Houston in 1993 and 1994, playing for his father both seasons and captaining the Cougars as a 1994 senior. He even took some snaps when Houston played in the Coliseum in 1993, completing 1-of-3 passes in late duty in Houston’s 49-7 trashing by the Trojans. Before his Houston playing days, Helton spent 1991 and 1992 at Auburn, where he earned 1992 SEC All- Academic honors. He redshirted there in 1990.

The Obvious: Offensive coordinator and quarterbacks coach Graham Harrell played the position at Ennis (Tex.) High, Texas Tech, and in both the Canadian Football League and the NFL.

The Not So Obvious: Jinks played quarterback for three seasons at Judson High, where he was outstanding and played in the state title game against Dallas Carter in 1988. Judson lost the game but gets credit for the state title because Carter used an illegible player. Jinks then went on to play at Angelo State (1990-93), starting his junior and senior years. He led the LSC (Lone Star Conference) in passing average in 1994. Jinks is only the second Ram to lead the LSC in that category since 1965.

The Not So Obvious: McGuire starred as both a quarterback and defensive end at Crane High, where he was named Texas Class 3-A all-state and player of the year as a senior. In addition, he was a two-time district MVP. FYI, Clay was also a two-time all-state selection in baseball whose fastball was clocked at 92 miles per hour.

The Not So Obvious: Another Texas Tech grad, Doege (pronounced DAY-ghee) prepped at Crane (Tex.) High, where he started at quarterback as a freshman and sophomore, and then later at Frenship High in Wolfforth (Tex.), but knee injuries sidelined him for his junior and senior seasons. Despite the injuries, Texas Tech head coach Mike Leach honored the school’s earlier 2006 offer of a scholarship, and Doege signed his letter of intent to play for the Red Raiders in February 2008. Doege was Texas Tech’s starting quarterback for the 2011 and 2012 seasons. After playing for Texas Tech, Doege signed as a 2013 undrafted free agent with the Atlanta Falcons, and in 2014, he was signed with Saskatchewan of the Canadian Football League.

The Obvious: Trojans safety coach Craig Naivar is a former quarterback at Taylor (Tex.) HS and was a quarterback/safety at Hardin-Simmons University.

The Not So Obvious: As a quarterback and safety at Taylor High, where he was known as a “versatile, tough-minded” quarterback/safety, Naivar considers his Ducks proudest moment as playing as a senior in the regular-season finale after coming back from a broken ankle (he had a metal plate and six screws inserted during surgery) in the second game of the season. From Taylor, Naivar went on to become a four-year (1990-93) letterman safety and quarterback at Hardin-Simmons. As a senior, he was team captain, won all-conference honors, and played on a conference championship team that advanced to the national semifinals (NAIA D-2).

The Not So Obvious: After his prep playing career at Boulder HS, which is also the alma mater of former Trojans All-America tackle Tony Boselli, Bohn went on to be a backup quarterback at Kansas University and started one game against No. 6 Nebraska in 1982. In that game against the Cornhuskers, who won 52-0, Bohn was sacked five times for 54 yards in losses, intercepted once but did complete 4-of-14 passes for 63 yards. Poignantly, Bohn finished his college quarterbacking career by mopping up in a 28-3 loss at Colorado and thus playing both his final college and high school games in his hometown.

The Obvious: And finally, it isn’t surprising that with so many former quarterbacks on the Trojans staff, passing the football is the No. 1 priority.

The Not So Obvious: So next time the Trojans bring in a new head coach, it might be prudent to check the new guy’s playing background. You just might be getting an inkling into his offensive philosophy and criteria for the assemblage of his staff.