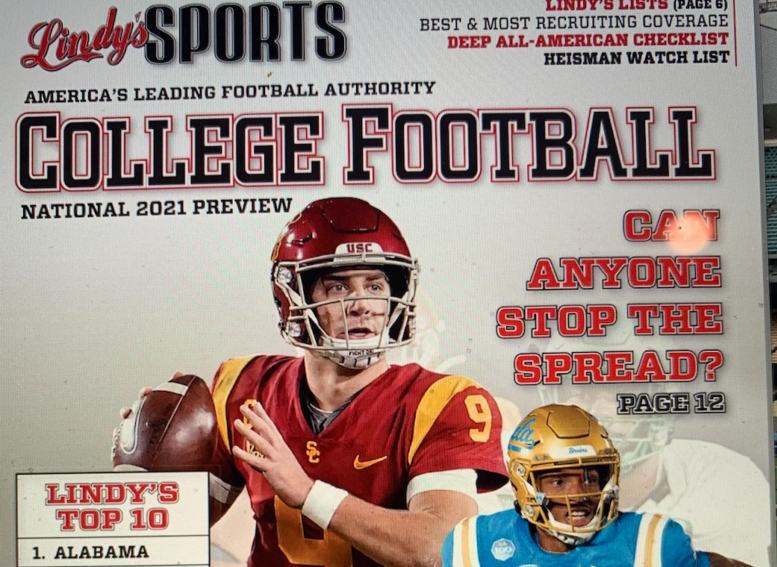 The Obvious: With so much up in the COVID-19 air before the 2020 college football season, preseason college football magazines had to contemplate whether to publish a fall edition or consider an updated winter edition and in both scenarios the possibility of limited or no  playoffs altogether.

The Not So Obvious: Well, a year later, those same football magazines now have a clear path on the upcoming 2021 season, so it shouldn’t be surprising that Lindy’s College Football National Preview, which is celebrating its 40th season of publication, wasted no time being first on the market during the last week of May. So, let the O/NSO give you some tasty morsels of what Lindy’s had to say about the USC Trojans.

The Obvious: In addition to a national cover, college football magazines normally have regional covers to promote sales within a specific area of the country.

The Obvious: A number of high-profile news outlets like ESPN.com have already released their “way too early” 2021 college football rankings, and the USC Trojans have been ranked anywhere between 12-25 in the country.

The Not So Obvious: Lindy’s has published the Trojans as the No. 22 team in the country with Alabama being ranked No. 1, much to the shock of no one. Oregon is ranked No. 10.

The Obvious: The Trojans have eight returning starters on offense and defense, respectively, and return both their placekicker and punter.

The Not So Obvious: Regarding the Trojans, Lindy’s writes, “USC may not be a clear favorite to win the Pac-12 South, but the Trojans are still arguably the division’s most talented team. Avoiding Washington (No. 17) and Oregon (No. 10) in cross-divisional play is a plus, and if (Todd) Orlando’s defense and (Graham) Harrell’s “Air Raid” continue to progress, the Trojans will be pace-setters.”

The Obvious: Oregon is the defending Pac-12 champion and returns six starters on offense, seven on defense, and both its kicker and punter.

The Not So Obvious: Lindy’s predicts Oregon to win the Pac-12 North ahead of Washington, and then go on to win the 2021 Pac-12 Conference title. Looking at the Pac-12 South race, Lindy’s predicts ASU to win the division ahead of the Trojans. For the record, Lindy’s Pac-12 South prediction order of finish is as follows: ASU, USC, Utah, Colorado, UCLA, and Arizona. The Pac-12 North will finish as follows: Oregon, Washington, Stanford, Cal, Oregon State, and Washington State.

The Obvious: Many believe that the Pac-12 South Division title game will be when the Trojans play at ASU on Nov. 6.

The Not So Obvious: Lindy’s agrees with that evaluation, and that the USC/ASU is one of the top dozen conference games in the country. Lindy’s writes, “The Trojans are in a position to re-establish themselves in the Pac-12 South and beyond, but the Sun Devils are well-stocked and were far better last year before bumbling away a sure victory.”

The Obvious: There is conjecture if the Trojans 2021 schedule is difficult, hard, or easy.

The Not So Obvious: Regarding the Trojans’ schedule, Lindy’s writes, “If this is yet another make-or-break year for Clay Helton, at least he cannot complain about the schedule. There are no Friday night games. No Oregon game. No Washington game. The one troublesome stretch begins in October when USC hosts Utah, go to Notre Dame, hosts Arizona, visits Arizona State, and travels to Cal in a five-game stretch. And even that is not terribly daunting by Pac-12 standards.”

The Obvious: During Clay Helton’s tenure at Troy, the Trojans have never played in the post-season College Football Playoffs.

The Not So Obvious: According to Lindy’s, Helton’s Trojans will again miss the post-season CFP. Lindy’s sees the CFP Final Four being Alabama, Clemson, Georgia, and Oklahoma.  Of course, this particular prediction could be altered if the CFP expands before this upcoming season and allows the Pac-12 champion an automatic berth in the playoffs with the possibility of at-large teams.

The Obvious: Trojans head coach Clay Helton is again listed by most experts as on the hottest of hot seats for D-1 college coaches.

The Not So Obvious: Helton will probably be relieved to learn that he’s not No. 1 on Lindy’s hot seat. That honor goes to embattled Michigan coach Jim Harbaugh. However, Gentleman Clay is No. 2, and Lindy’s writes, “New year, same discussion about Helton’s future. Finishing in the AP Top 25 in just three of his six years is only half as good as USC should be. Considering that Helton has run out of coordinators/assistants to fire, it’s now his neck that is way out there.”

The Obvious: Most college football mags now seem to have a “secret” or unidentified conference coach, who is supposed to give an objective overall observation of its competitor.

The Not So Obvious: Lindy’s has selected a Pac-12 South assistant to give a blurb on the Trojans. The unidentified coach said, “It’s USC, but they are not a Big Boy football program. They seem to be getting worse from a national perspective because they don’t dominate inferior programs.” Looks like USC bulletin board material to the O/NSO.

The Obvious: In 2022, the Rose Bowl will not be hosting a CFP semi-final game.

The Not So Obvious: Lindy’s predicts that on January 1 in the Rose Bowl it will be the Oregon Ducks versus the Ohio State Buckeyes. Lindy’s did not predict which bowl the Trojans will be playing, but it won’t be a New Year’s Six bowl game.

The Not So Obvious: When it comes to Slovis and the Heisman, Lindy’s has former Trojans’ quarterback and current Georgia starter JT Daniels at No. 5 in its Heisman Trophy Top 10 candidate list ahead of Slovis, who is listed at No. 9.

Regarding Slovis, Lindy’s writes, “Nobody fessed up to Slovis having arm issues last season although it wasn’t hard to spot several butterflies floating out of his right hand. Whatever was going on, the dude still found a way to pile comeback victory upon comeback victory, and we still believe in his accuracy – and the potential for the Trojans to be good.”

The Not So Obvious: Lindy’s has a first and second team offensive and defensive team, respectively. No Trojans made either offensive team, but Drake Jackson was listed as a second-team All-America defensive lineman.

The Obvious: Most college football publications have player rankings for each position group.

The Not So Obvious: Besides Troy’s Kedon Slovis being ranked as the No. 10 quarterback in the country, Lindy’s lists wide receiver Drake London at No. 8 in his receiver position group, and defensive end Drake Jackson at No. 5 for DEs.

The Obvious: Another popular item in college football magazines is the national ranking of team position groups.

The Not So Obvious: In terms of Top 10 position group rankings, Lindy’s ranks the Trojans’ receivers as the No. 5 unit in the country with Ohio State being No. 1. No other USC position group made Lindy’s Top 10.

The Obvious: According to Lindy’s, the Trojans biggest non-conference game is when the Men of Troy visit Notre Dame on Oct. 23.

The Not So Obvious: Lindy’s agrees that the Irish and the Trojans game should be listed in its top dozen non-conference games, but they are actually tied at No. 7 along with the following week’s visit to South Bend by North Carolina on Oct. 30.

The Not So Obvious: In one of its many lists, Lindy’s lists Keaontay Ingram as one of five transfer players to have a major impact on a program for 2021.

The Obvious: A major question mark for the 2021 Trojans again is the offensive line.

The Not So Obvious: Despite the question of the Trojans’ O-line, offensive guard Andrew Vorhees, who could be moved to left tackle in the fall, is listed by Lindy’s as the No. 6 guard in the country. It should be noted, however, that Justin Dedich is listed as the No. 10 center in the country despite the fact that Dedich wasn’t even the USC starter at the end of spring ball. The starter was and is veteran Brett Neilon. Go figure.

The Obvious: The Trojans are looking for big things in 2021 from OLB Drake Jackson.

The Not So Obvious: Jackson is listed as the No. 8 defensive end in the nation by Lindy’s. Others listed nationally on defense at their respective positions are defensive tackle Stanley Ta’ufo’ou at No. 6, corner Isaac Taylor-Stuart at No. 4, and safety Isaiah Pola-Mao at No. 10. However, when Lindy’s listed its preseason All-Pac-12 teams, corner Chris Steele was listed on the first team, defensive end Nick Figueroa was second team, and Isaiah Pola-Mao was a third-team selection as was punter Ben Griffiths.

The Obvious: Trojans true freshman defensive end Korey Foreman was considered by many to be the class of 2021 National Player of the Year.

The Not So Obvious: Lindy’s lists Foreman as one of its five true freshmen to watch and writes, “THIS is what USC used to do all the time. When the nation’s No. 1 recruit grows up in Southern California (Corona), you sign him up.”

The Obvious: And finally, most publications – depending on the publication – have the Trojans’ recruiting class of 2021 ranked either No. 7 or No. 8 nationally.

The Not So Obvious: Commenting on the Trojans’ recruiting class of 2021, Lindy’s writes, “This is the type of class that can fully eliminate all the coaching hot seat talk that’s been going on around Los Angeles.” And for the record, Lindy’s Top 100 for the class of 2022 includes Santa Ana (Calif.) Mater Dei HS corner and Trojans’ verbal Domani Jackson as the nation’s No. 4 prospect.

The O/NSO encourages you to purchase Lindy’s College Football National 2021 Preview; it is or will be available at newsstands in the US for $10.99 or $12.99 in Canada.