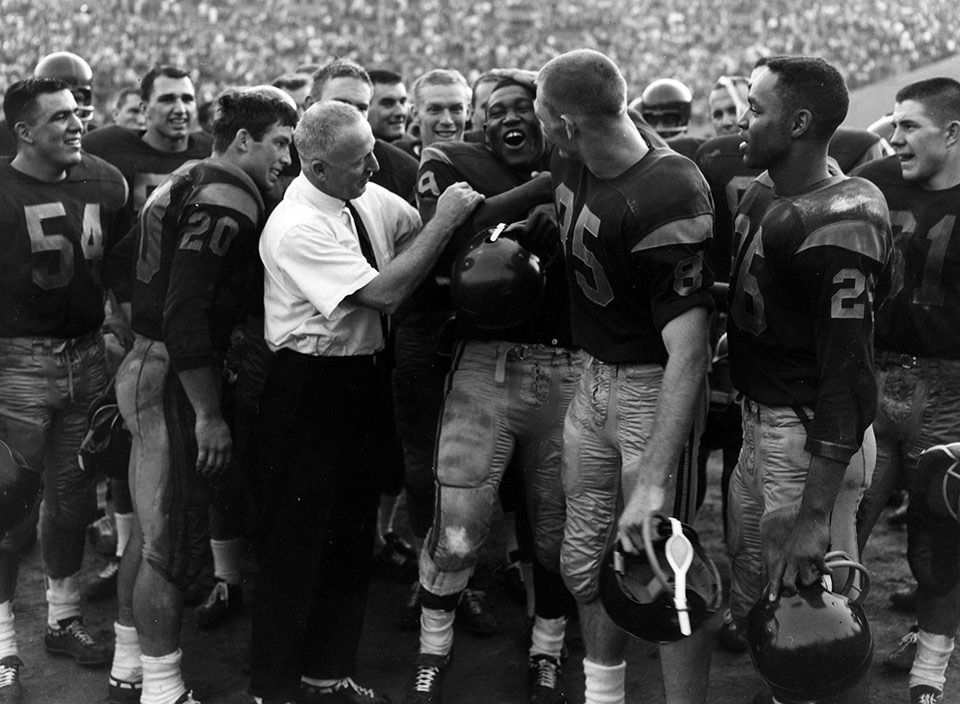 The Obvious: USC Trojans football is historically considered amongst the greatest college programs of all-time, which has been validated by its 11 national championships.

The Not So Obvious: As we approach the 2021 season, let’s take a look back at the 11 national championship teams through a big assist from the Trojans football media guide, historical team pictures, and treasured videos. In Part 1 of our two-part series, we look at the national title teams of 1928, 1931, 1932, 1939, 1962 (photo above), and 1967. So, let’s begin our O/NSO salute with the founding father of national championship USC teams, the legendary head coach Howard Jones and his “Thundering Herd.”

The Obvious: In 1928, the Trojans (9-0-1) won their first national title under head coach Howard Jones.

The Not So Obvious: “The ‘Thundering Herd,’ under Hall of Fame coach Howard Jones, galloped to the Trojans’ first national championship in 1928. A swarming defense, led by tackle Jesse Hibbs and end Garrett Arbelbide, gave up only 59 points all season, while an offensive backfield of Harry Edelson, Russ Saunders, Don Williams and Marshall Duffield rolled over, under, and through their opponents. USC finished the season with nine wins and no losses, with the only blemish being a 0-0 tie with Cal as the Golden Bears continued to be a nemesis for Troy in the 1920s.”

The Obvious: In 1931, the Trojans (10-1) earned their second national championship again under head coach Howard Jones.

The Not So Obvious: “The 1931 edition of Howard Jones’ ‘Thundering Herd’ was the team that captured the imagination of college football fans everywhere, and the hearts of the citizens of Los Angeles. More than 300,000 welcomed the Trojans home from a thrilling 16-14 victory over Notre Dame in South Bend—a victory clinched by what sportswriter Maxwell Stiles called ‘Johnny Baker’s 10 little toes, and three BIG points.’

The Obvious: In 1932, the Trojans (10-0) captured their third consecutive national title and second in a row once again under Howard Jones.

The Not So Obvious: “At the start of the season, future greatness was not apparent for this team. Seven regulars had graduated from the 1931 squad, including three All-Americans. By the end of the season, however, it was hailed as perhaps Jones’ finest squad. In fact, some still regard this as USC’s best team.

“The line, one of the greatest in Trojan history, included All-Americans Tay Brown, Aaron Rosenberg and Ernie Smith. The offense, directed by Homer Griffith and featuring back Cotton Warburton and ends Ray Sparling and Ford Palmer, was potent despite losing star Orv Mohler to injury. Meanwhile, the defense shut out its first five opponents, before finally being scored upon in the fourth quarter of game six.”

The Obvious: In 1939, the Trojans (8-0-2) under the now legendary Howard Jones and his “Thundering Herd” captured its fourth national championship.

The Not So Obvious: “Jones’ team rolled to an 8-0-2 record, shutting out six teams and allowing just 7 points to three others. Only 33 points were scored upon Troy that year-a mark no Trojan defense has topped since. Lineman Harry Smith was a unanimous All-American, while quarterback Grenny Lansdell -who led the team with 742 rushing yards and 54 points-was also named to some teams.

“At season’s end, the Trojans were given the Knute Rockne Trophy, awarded each year to the No. 1 team in the country by Professor Frank G. Dickinson, a respected analyst who declared, “The Trojans were the best team in the best section…and the nation’s other top teams did not play as strong a schedule as USC.”

The Obvious: In 1962, the Trojans (11-0) won their fifth national title under third-year head coach John McKay.

The Not So Obvious: “In 1962, John McKay led USC to its first national championship in 23 years. McKay’s team featured the talented quarterback tandem of Pete Beathard and Bill Nelsen, who combined to pass for 18 touchdowns while tossing only three interceptions. A then-school-record 11 of those touchdowns went to consensus All-American end Hal Bedsole. The ground attack was run from the I-formation, led by the versatile Willie Brown at tailback and co-captain Ben Wilson at fullback.

“The Trojan defense allowed only 92 points all season. All-American linebacker Damon Bame led a unit that had three shutouts (including a 25-0 blanking of Notre Dame) and allowed more than 10 points only twice during the regular-season. Troy capped the year by outlasting Wisconsin, 42-37, in one of the most exciting games in Rose Bowl history.”

Below are the highlights of that classic 1963 Rose Bowl Game against Wisconsin.

The Obvious: In 1967, the Trojans (10-1) won their sixth national title and John McKay’s second of eventually four championships.

The Not So Obvious: “The 1967 Trojans relied on the running of tailback O.J. Simpson, the blocking of Outland Trophy-winning tackle Ron Yary, and a stifling defense to win USC’s sixth national championship.

“The Trojans celebrated New Year’s Day 1968 with a 14-3 victory over Indiana in the Rose Bowl. The incomparable Simpson, the Heisman runner-up that year, ran for a then-NCAA-record 1,543 regular-season yards (1,709 overall) to go with 13 touchdowns. Mike Battle, Tim Rossovich, and Adrian Young led a defense which allowed only 87 points. A record five Trojans were selected in the first round of the 1968 NFL draft, with Yary going first overall.”

Below are the highlights of the legendary1967 USC vs UCLA game in the Coliseum that many consider the greatest game in the history of the Trojans and the Bruins. This is the one all Trojans young and old have heard about.

The Obvious: And finally, the foundations for USC national championship football teams began in 1928, and there was a mandate to continue the quest to maintain a national profile.