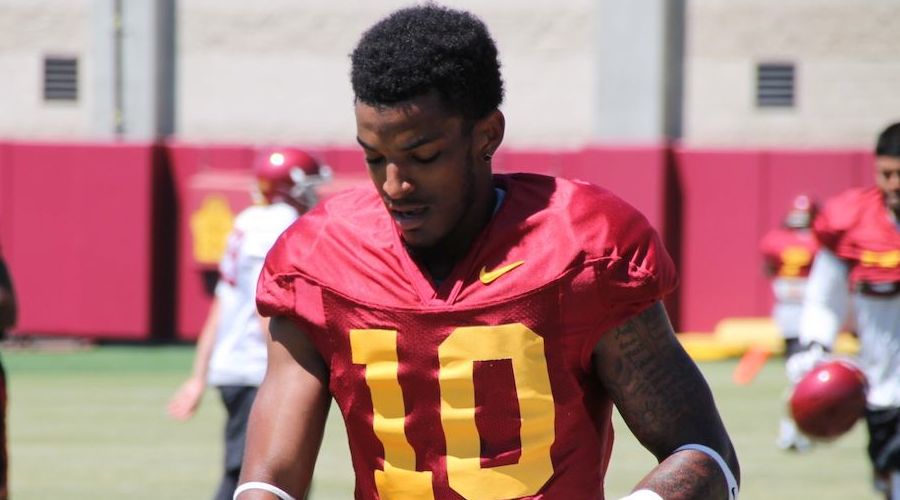 It was another physical, full-pads practice session for the Trojans on Wednesday, and with the team still in the midst of a bye-week, there was plenty of 11-on-11 work, with a heavy emphasis placed on getting the younger and less experienced members of the team a large quantity of reps.

“We had a physical practice, a good one,” said USC head coach Steve Sarkisian. “A lot of threes getting work. They’ll get a couple days off, and then we come back to work Saturday, which is a bonus Monday for us as we move forward. And then for us as a staff we get to recruit for a couple days, and then get focused on Washington here on Saturday.”

For the second consecutive day, Trojans sophomore wide receiver JuJu Smith-Schuster was noticeably absent due to what Sarkisian said were “personal reasons.” The USC head coach would not elaborate on the matter, or confirm whether or not Smith-Schuster would be back in action when the team next practices on Saturday.

“When he gets back we’ll address it then, but for now it’s a personal issue that, as a coach, I have to be there for my players,” Sarkisian said. “And right now that’s the status.”

With wide receiver Darreus Rogers sidelined for the past two days with a hamstring injury, in addition to Smith-Schuster’s absence, converted quarterback Jalen Greene’s workload has increased dramatically in practice, and he’s responded by putting back-to-back solid workouts together.

He caught everybody’s attention during an early one-on-one drill when he came up with the play of the day, making a leaping catch over Adoree’ Jackson on a fade route along the sideline where Jackson appeared to have him blanketed.

And Greene’s performance this week hasn’t gone unnoticed by his head coach, either.

“What he gives us is versatility,” Sarkisian said. “With his quarterback background, he’s got a high football IQ. He basically knows every position, offensively, so we can line him up everywhere, and then now he’s showing physicality which is pretty cool to see.”

With the bye-week providing some extra time, Sarkisian said that the Trojans coaching staff couldn’t wait to hit the recruiting trail following practice.

“We’re basically leaving right now,” Sarkisian said. “This is a great chance, for two days, for us to get out on the road, see some games and get to high schools. We need to take advantage of it because we don’t have the natural bye that maybe other people do, so we have to take advantage of the days we have.”

Sarkisian took time out to talk about what the 6-foot-4 pass-catcher brings to the table.

“I like his physicality,” Sarkisian said of Pittman. “For our system, as we’ve come to find out, when you have a big, physical wide receiver on the outside, not only catching the ball, but blocking, they’re a real presence for us. And I think he’s going to provide that same mold of the position that we’re looking for.”

Pittman also stars on the defensive side of the ball for Oaks Christian, and is projected by some as a potential linebacker down the road. The signing papers bind USC to Pittman, while also paving the way for him to arrive on campus in January, but Pittman, himself, is not bound to the university yet.

– Starting nose tackle Antwaun Woods went to the sideline early after “tweaking” his pectoral muscle. Claude Pelon took his place with the No. 1 defense throughout the remainder of practice.

– Cornerback Kevon Seymour, who has missed the last two games with a knee injury, got more work in on Wednesday than he has in recent days, participating in some 11-on-11 periods with the No. 3 defense.

– Tight end Taylor McNamara went to the sideline mid-way through practice after rolling his ankle, but Sarkisian said that he will be OK.

– Sarkisian said that Christian Tober will be out for awhile after breaking his clavicle on Tuesday.

– Toa Lobendahn spent the day with the No. 2 offense at center, with Viane Talamaivao taking his place with the No. 1 group at right guard.

“That was by design,” Sarkisian said. “We’re just getting him reps. The bye week gives us a chance to do that stuff, to move a couple guys around.”

– Sarkisian also said that Dominic Davis has been taking some reps at receiver.

– After spending Tuesday’s practice with the No. 2 defense, Cameron Smith was back with the No. 1 group at ‘mike’ linebacker, alongside Anthony Sarao.

– Delvon Simmons blocked a 40-yard field goal attempt by Alex Wood during a team period, with Iman Marshall scooping it up for a nice return. Marshall also forced Isaac Whitney to fumble later with a big hit.

– Safety Davonte Nunnery came up with an interception late in practice on a pass over the middle by Sam Darnold.

– Justin Davis ran for a gain of five yards up the middle before a host of defenders stopped him.

– Max Browne tried to connect with Jahleel Pinner outside, but Marvell Tell was there to break up the pass.

– Browne hit Soma Vainuku along the sideline for a gain of 15 yards.

– Darnold connected with David Mellstrom for a gain of close to 10 yards before Ykili Ross made the stop.

– Cody Kessler hit Steven Mitchell Jr. for a gain of around 20 yards before Chris Hawkins made the stop.

– Ware bounced outside for a 25-yard-plus gain before Matt Lopes made the stop.

– Kessler hit Mitchell outside for a 15-yard gain.

– Kessler delivered a quick pass outside to Whitney before Marshall delivered the big hit, forcing the fumble, with the ball rolling out-of-bounds.

– Kessler hit Jones outside for an eight-yard TD.

– Darnold found Caleb Wilson over the middle for a gain of close to 35 yards before Seymour made the stop.

– Darnold found George Katrib for a 5-yard TD pass over the middle.

– Kessler connected with Greene outside for a gain of 15 yards before Marshall made the stop.

– Robby Kolanz made a nice leaping grab over the middle on a pass from Browne.

– Nunnery picked off the Darnold pass over the middle.

– Darnold found D. Davis outside for a gain of close to 10 yards before Ross made the stop.

– Browne tried to hit De’Quan Hampton deep along the sideline, but Jonathan Lockett broke up the pass.

– Darnold connected with Mellstrom outside for a gain of 25 yards.

– Darnold hit Katrib outside for a gain of around 30 yards.

– Daniel Imatorbhebhe made a great leaping grab along the sideline for a gain of around 15 yards.