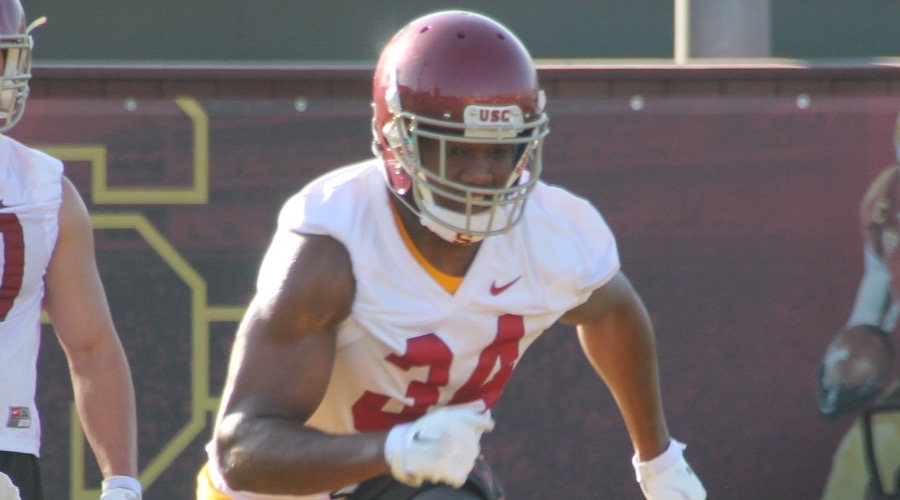 With an Oregon team coming up this Saturday that USC head coach Clay Helton has stated that he believes is much better than their 3-5 record indicates, the Trojans took part in another shorts, shoulder pads and helmets practice on Wednesday.

Following the two-hour session on Brian Kennedy-Howard Jones Field, Helton didn’t hesitate to point out what stands out most to him about the Ducks – speed, specifically at the skill positions. It’s a trait that Helton has observed in every Oregon team that he has faced in his time at USC.

“Without question, over the last seven years I’ve been here, they’ve always been the fastest team we’ve played,” Helton said. “You know, whether it was De’Anthony Thomas, now you’ve got a Charles Nelson, you’ve got a Tony Brooks-James, you’ve got guys that can just fly. It’s always been a trademark.”

The Oregon offense has shown some real improvement over the past two weeks, and it’s due in large part to the standout play of quarterback Justin Herbert. Helton said that it’s vital that the Trojans make life uncomfortable for the freshman passer on Saturday – particularly in third-down situations.

“Defensively, I think it’s imperative to get pressure on this quarterback on third down, whether it’s our four down rush, or whether we’re bringing pressure,” Helton said. “I look at what Justin did last week, and you see him sit in the pocket, and he pitches it for 489 yards. If you don’t hit this kid, you’re going to have a long day because he can distribute it.”

One day after word got out that USC had signed the necessary paperwork to allow backup quarterback Max Browne to transfer to any school at the end of the semester, and to begin talking to potential suitors immediately, he discussed the situation with the media on Wednesday.

Browne revealed that he’s already heard from a few schools, but he did not wish to name them at this point. Still in the early stages of the process, he’s making sure not to rush into anything.

“For the next few weeks I’ll probably kind of just see who contacts me,” Browne said. “That’s kind of the beauty of doing this whole thing early. And then come December maybe I’ll start reaching out to schools where I think it would be a good fit, or that I’m interested in, and see if there’s mutual interest on their end. If it is a semester school, I kind of have to make a quick turnaround once the new year starts.”

Browne said that he has not ruled out any FBS or FCS programs, and that location is not a factor.

“I’m willing to go anywhere,” Browne said. “That was the case out of high school, and it’s no different, if not more emphasized now that I have another go-round at it.”

– Injured tailback Justin Davis (high ankle sprain) ran briefly under the supervision of a trainer for the second consecutive day, but once again, he did not cut or do anything where he made a change in direction.

– After tweaking his ankle on Tuesday, tailback Aca’Cedric Ware did not participate in practice. As a result, Dominic Davis became the No. 2 tailback, and he got a lot more work in than he usually does.

– Cornerback/Nickelback Jonathan Lockett (hip) did not participate in practice, and Helton said that it is looking doubtful that he will be available to play against the Ducks on Saturday. Leon McQuay III continued to run at the nickel spot in his place, with Chris Hawkins and Marvell Tell at the two safety positions. Ajene Harris lined up with the No. 2 defense at nickelback.

– Inside linebacker Michael Hutchings went out midway through practice after his calf started to tighten up, but Helton said that he is expected to return to action in the next day or two. While he was sidelined, freshman Jordan Iosefa ran with the No. 1 defense at the WILL linebacker spot – alongside MIKE linebacker Cameron Smith.

– SAM linebacker Olajuwon Tucker had the play of the day, coming up with a pick-six that came on a pass from Browne to Darreus Rogers, that was tipped into the air by Isaiah Langley, and then again tipped by Rogers before Tucker pulled it in.

– Iman Marshall also came up with an interception, picking off a pass thrown by Matt Fink during a service team period.

– Former Trojans defensive lineman Shawn Cody was among those in attendance.

– NFL scouts from the Arizona Cardinals, Cleveland Browns and Philadelphia Eagles were also on hand.

– Sam Darnold hit Deontay Burnett outside, but Uchenna Nwosu came up in a hurry and stopped the play for no gain.

– Darnold hit Isaac Whitney for a gain of close to 15 yards.

– Browne hit Michael Pittman Jr. over the middle for a gain of 12 or 13 yards.

– Browne tried to hit Hamptton over the middle but Jones intercepted it.

– Tucker came up with the pick-six on a pass thrown by Browne.

– Darnold hit D. Davis outside for a gain of close to 20 yards before Ykili Ross popped him.

– Darnold hit Burnett outside, but C.J. Pollard limited the play to a short gain.

– Darnold hit Ronald Jones II for a short gain outside.

– Darnold hit Pittman outside for a gain of close to 10 yards.

– Browne hit Cary Angeline outside for a gain of 15 yards.

– Browne hit Angeline outside for a gain of close to 20 yards.