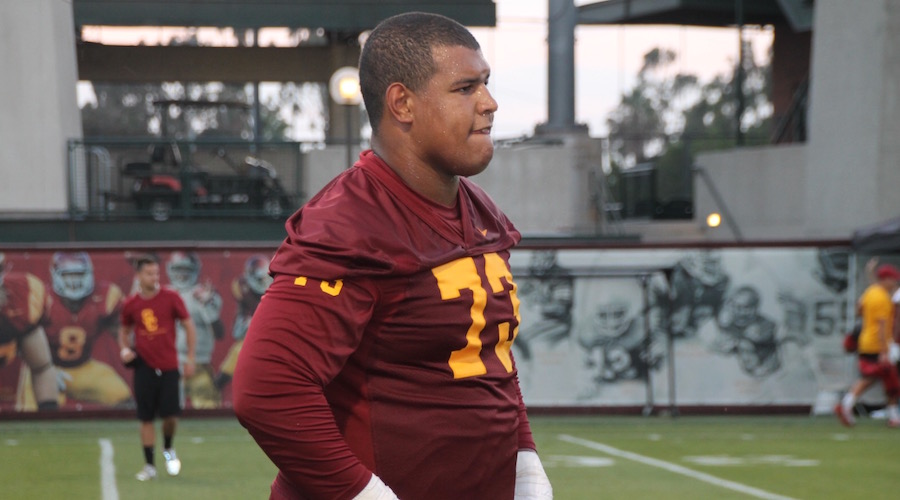 There was a special emphasis on three primary areas according to USC head coach Clay Helton: 1) third-downs, 2) preparing for the Buffaloes run/pass option (RPO) offensive schemes, and 3) gearing up for Colorado’s deep passing attack, which relies heavily upon the big-play ability of wide receiver Shay Fields, who is averaging almost 22 yards a catch this season, and who was once committed to the Trojans as a high school standout at nearby Bellflower (Calif.) St. John Bosco.

“The guy is doing an incredible job over his career,” Helton said. “You know, you’re talking about nine catches over 50 yards – four of them this year. His deep-ball-threat ability is as good as we’ve seen to date.”

But Fields is hardly the only offensive star for Colorado, as he’s combined with fellow wide receiver Devin Ross, as well as quarterbacks Sefo Liufau and Steven Montez to help the Buffaloes offense garner a reputation as one of the conference’s most dangerous units.

“I really think they have a great balance,” Helton said. “It’s what’s making them so dangerous, because you play off and then they just pitch it out with an RPO and they’re moving the chains right down the field. You try to come up and they’re throwing it over the top of your heads. Plus, I think they may do as good as anybody in the trick-play category. You look at the Michigan game, and there were as many as four trick plays that really broke open that game. So, you really have to play sound, disciplined football with this team.”

Starting USC right tackle Zach Banner did not participate in practice on Wednesday due to a left ankle sprain, and Helton said that there is a good chance that he will not play on Saturday.

Having originally suffered the injury during the Utah game, Banner did not play against Arizona State this past weekend. He suited up and tried to take part in practice on Tuesday, but was quickly pulled.

“He’s able to run and change direction, but a 360-pound man pushing other individuals – that’s where he’s struggling right now,” Helton said. “He really attempted it yesterday and it just wasn’t [happening], so we pulled him back. We’ll see how it goes through this week, but it looks doubtful right now. Maybe something will happen in the next two days. He got a PRP injection today. We’ll see how it takes.”

In Banner’s absence, Jordan Simmons spent most of the day with the No. 1 unit at right tackle, and Chuma Edoga took some reps there as well. Simmons started at the position against the Sun Devils this past weekend, and he wound up splitting time with Edoga.

– Other players who did not participate in practice on Wednesday were Noah Jefferson (academics), Ykili Ross (shoulder) and Jabari Ruffin (concussion protocol). Helton said that Ross is doubtful to play on Saturday, and that Ruffin is “50-50 at best.”

– Tight end Taylor McNamara (lower back sprain) was limited on Wednesday. He will be re-evaluated on Thursday.

– For the second consecutive day Jamel Cook (foot) participated in the entire practice session, running with the service team defense.

– Chris Brown ran primarily with the No. 2 offense at left guard, but he also took some reps with the No. 1 group at that position, and he even saw brief time at left tackle with the first unit.

– Freshman wide receiver Tyler Vaughns came up with the play of the day, reaching up high to haul in a 40-yard touchdown pass from Max Browne in the end zone, despite tight coverage by both Jonathan Lockett and Leon McQuay III. Vaughns also had a 35-yard touchdown catch along the sideline during an earlier service team period against the No. 1 defense.

– Sam Darnold attempted a pass outside, but Porter Gustin got a hand up and deflected it away.

– Darnold hit Steven Mitchell Jr. outside for a gain of 7 or 8 yards.

– Darnold hit Justin Davis outside, but McQuay came up in a hurry and limited the play to a short gain.

– Darnold hit Tyler Petite over the middle for a 35-yard TD.

– Darnold hit Daniel Imatorbhebhe over the middle for a gain of five yards before Lopes made the stop.

– Browne hit Deontay Burnett over the middle for a gain of around 15 yards.

– Browne tried to hit Jalen Greene outside, but Isaiah Langley broke up the pass.

– Darnold hit Dominic Davis outside for a big gain.

– John Houston Jr. and others stopped Ronald Jones II after a short gain.

– Darnold hit Mitchell over the middle for a gain of around 10 yards.

– Darnold hit Michael Pittman Jr. over the middle for a gain of 15 yards.

– Browne hit Vaughns over the middle for a gain of around 7 yards.

– Browne hit Vaughns deep down the middle for a 40-yard TD.

– Jones ran outside for a gain of close to 15 yards.

– Browne hit Vaughns over the middle for a gain of close to 10 yards.

– Browne tried to hit Velus Jones over the middle, but Lockett broke up the pass.

– Browne hit Vaughns outside for a gain of 10 yards.

– Browne tried to hit Vaughns deep, but Lockett broke up the pass.