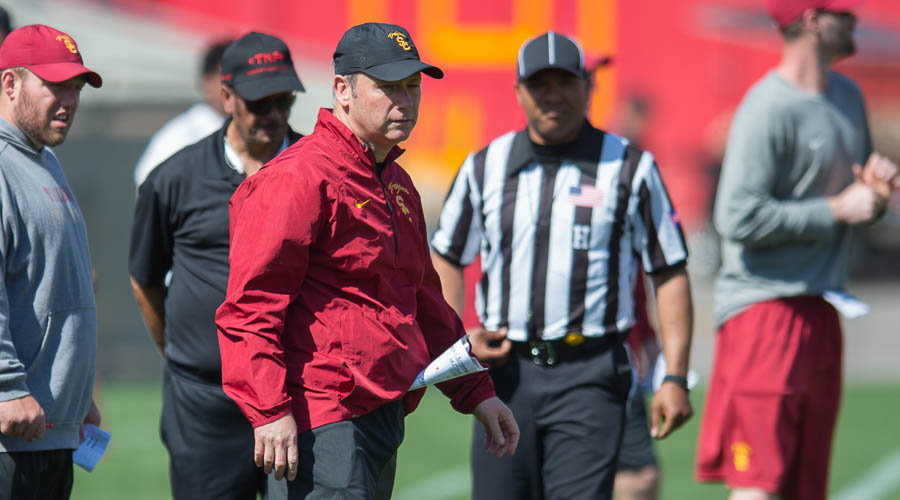 The Trojans came out in shorts, shoulder pads and helmets on Tuesday to take part in a two-and-a-half hour practice session that wound up being highlighted by the performance of Clancy Pendergast’s defensive group.

Playing fast and physical, and showcasing the attacking mindset that Pendergast’s system is noted for, the defense was particularly impressive during a late 11-on-11 period, as Porter Gustin, Michael Hutchings, and Marvell Tell came up with individual sacks, while Jabari Ruffin, Christian Rector and Kevin Scott combined for sacks.

“We really put the kids in a 20-play kind of all-pressure situation, with the whole gamut of pressures that Clancy has put in, and I’ll tell you what, it was really, really neat to see,” said USC head coach Clay Helton. “It showed, one – how the package has been developing over the last 10 practices. Then, to see it all combined, and see the quarterback really be forced off his spot – there were several sacks. It was great to see. That’s what I remember Clancy’s defense being – ultra aggressive, and it was just a hard day for the quarterback.”

Max Browne and Sam Darnold, did have better luck in the final competition period of the day, which had each quarterback leading the offense against the defense in a triple-overtime situation.

Browne, leading the No. 1 offense against the No. 1 defense, was able to find JuJu Smith-Schuster for a five-yard touchdown, before his pass to Darreus Rogers on the two-point conversion fell incomplete. On Darnold’s drive, which featured the No. 2 offense against the No. 2 defense, the redshirt-freshman threw a beautiful 25-yard touchdown pass to De’Quan Hampton in the corner of the end zone on the first play. Darnold connected with Hampton again on the two-point conversion play, which resulted in Browne and the No. 1 offense – as well as the second-team defense – taking a lap around Brian Kennedy-Howard Jones Field.

After missing the 2015 season after undergoing surgery on both of his hips, wide receiver Ajene Harris has put together a strong spring so far. But with the team low in numbers at cornerback, the Los Angeles (Calif.) Crenshaw product took some reps at cornerback on Tuesday as a precautionary move.

Predictably, Harris struggled at times, but he also showed promise at others, as he showcased the athleticism and natural instincts that made him an outstanding defensive back on the high school level.

“We’ve got several special athletes here,” Helton said. “One of the things I’ve seen, we’ve had a little bit of a lack of depth [at cornerback] because of some injuries, and because of some surgeries that have gone on, and you look up, and I was like, ‘who on offense, if we had to, could go over and help us defensively?’ Well, Ajene is that type of guy. We watched him, his [evaluation] coming out of high school – he was playing quarterback, he was playing wide receiver, he was playing corner. And for him to go over there and help in an emergency situation, we really wanted to give him some experience this last six weeks, just in case if we get in that situation.”

For the second consecutive practice, Jordan Simmons – normally a guard – took some reps at right tackle with the first offensive unit.

Having suffered a litany of knee injuries in his time at USC, Simmons is now healthy, and arguably in the best shape of his career, and it’s evident in the way that he’s playing this spring as he’s been rotating days with Viane Talamaivao at right guard with the No. 1 offense.

But with left tackle Chad Wheeler limited with an ankle injury, and Chuma Edoga heading to the sideline late due to wrist soreness stemming from offseason surgery, Simmons spent the last portion of practice at right tackle – just as he did on Saturday.

Similar to the situation with Harris at cornerback, however, Helton said that move is not permanent, and that more than anything else, it was made so that Simmons is ready to fill in at the position in an emergency situation.

– Among those who did not practice on Tuesday due to injury were John Plattenburg (ankle), Jonathan Lockett (concussion) and Clayton Johnston.

– Wheeler (ankle), Michael Pittman (clavicle) and Noah Jefferson (back) were limited. It marked the first time since early in spring camp that Jefferson has taken part in any portion of practice, with Helton noting that he could have participated in even more drills, but that the staff wanted to hold him back as a precautionary measure.

– Edoga (wrist) took part in the vast majority of practice, including in contact drills, until late in the day.

– Safety Leon McQuay III was not in attendance due to class.

– The No. 1 offensive line to start the day in the first contact 11-on-11 period had Zach Banner at LT, Chris Brown at LG, Nico Falah at C, Jordan Simmons at RG, and Chuma Edoga at RT.

– The No. 1 offensive line unit to end the day had Banner at LT, Brown at LG, Falah at C, Talamaivao at RG, and Simmons at RT.

– Soma Vainuku was at practice, and he even jumped in and took part in some individual drills – as a linebacker.

– Also on hand were a number of recruits, including Class of 2019 defensive end Kayvon Thibodeaux (Los Angeles, Calif./Dorsey).

– Following practice, Helton said that his No. 1 concern at this point is the depth and youth of the defensive line.

“That’s the one group we’re going to have to stay lucky, and stay healthy,” Helton said.

– Helton also said that 44 members of the USC football team would be honored at tonight’s Trojans baseball game for having a GPA of 3.0 or higher.

– Browne hit Taylor McNamara outside for a short gain before Isaiah Langley made the stop.

– Browne hit Steven Mitchell Jr. outside for a gain of close to 20 yards.

– J. Davis ran outside for a gain of close to 10 yards before Matt Lopes made the stop.

– Darnold connected with Reuben Peters outside for a gain of 10 yards.

– Darnold hit Peters outside for a gain of 7 or 8 yards.

– Jalen Greene hit Hampton over Harris for a gain of around 40 yards.

– Greene scrambled and tried to break loose, but Jabari Ruffin stopped him after a short gain.

– Fink hit Isaac Whitney outside for a gain of 5 yards before Olajuwon Tucker made the stop.

– Browne hit Darreus Rogers outside for a 10-yard TD.

– Browne tried to hit Smith-Schuster outside, but Langley broke up the pass.

– Darnold hit Deontay Burnett over the middle for a 25-yard TD.

– Darnold hit Rogers in the corner of the end zone over Hart for a 20-yard TD.

– Browne hit Smith-Schuster over the middle for a gain of 6 or 7 yards.

– Browne hit Dominic Davis outside for a gain of close to 10 yards.

– Darnold hit Daniel Imatorbhebhe over the middle for a gain of 8 or 9 yards.

– Darnold hit Whitney outside for a gain of 15 yards with C.J. Pollard in coverage.

– Darnold hit Ajene Harris for a gain of 10 yards.

– Ruffin and Rector combined for the sack on Darnold.

– Browne hit D. Imatorbhebhe for a short gain before Hutchings made the stop.

– Browne hit Mitchell over the middle for a gain of around 40 yards.

– Scott stopped Ware for a loss.

– Uchenna Nwosu tipped a Browne pass at the line.

– Browne hit Mitchell outside for a gain of 10 yards.

– Darnold hit Deontay Burnett over the middle for a 10-yard TD.

– Browne hit Mitchell outside for a gain of close to 10 yards.

– J. Davis ran outside and made a nice cutback move before picking up close to 10 yards.

– Browne hit Smith-Schuster over the middle for a gain of 6 or 7 yards.

– Browne hit Jones outside for the touchdown.

– Darnold hit Hampton in the corner of the end zone for a 25-yard TD.