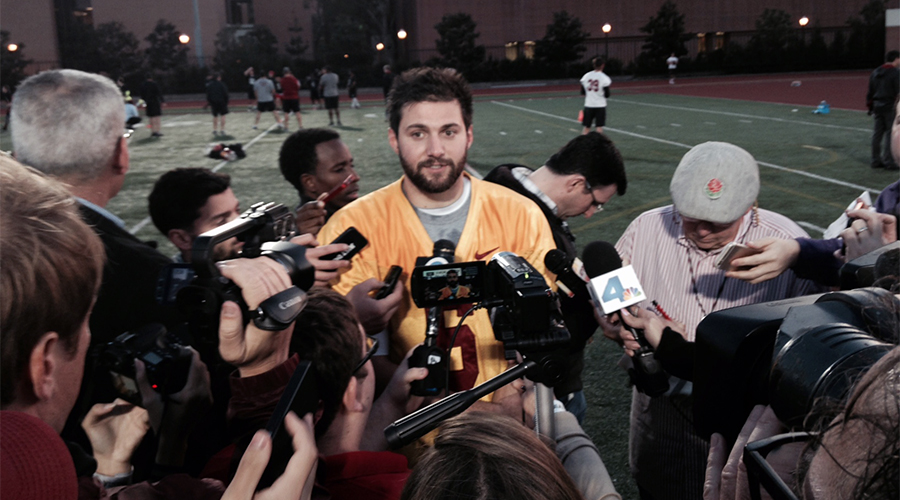 The Trojans kicked off spring practice on Tuesday afternoon, with USC head coach Steve Sarkisian’s squad taking part in a shorts and helmets workout on Cromwell Field that lasted just over two hours.

With the players and coaches in noticeably high spirits, it was a session marked by energy and a number of standout plays on both sides of the ball.

“We’ve been working for so long without officially having a practice, and just seeing guys come out here and actually getting to throw the ball around, playing against the defense, having fun and getting some competition going in an organized setting, I had a blast,” said USC fifth-year senior quarterback Cody Kessler. “I feel like the team morale is exactly where it needs to be.”

Now in Year 2 under Sarkisian, the Trojans were a much crisper looking bunch on Day 1 of spring practice this time around than they were a year ago. And while his team is already receiving plenty of positive attention heading into the 2015 season, after addressing the players just prior to practice, Sarkisian said that he thought that they responded well, showing no signs letting the hype sidetrack them.

“We don’t play a football game for six months, and the key for us is to focus on today,” Sarkisian said. “How are we getting better today, individually? How are we getting better today as a team? Hype, training camp, the game, all of that stuff is so far down the road, we can’t worry about that stuff. We need to focus on today, and I thought all in all, as a team, for the most part we really did a good job of that.”

The practice was highlighted by a two-minute drill to conclude the day that featured three standout plays by the defense, with Lamar Dawson just missing out on an interception as he broke up a pass, Leon McQuay III sacking Cody Kessler, and Scott Felix finishing things off with a sack of his own.

With the Trojans’ struggles down the stretch of games last season having been well chronicled, Sarkisian said that, in an effort to reverse that trend, the session-ending period will become a mainstay during spring camp.

“We’re going to have a challenge at the end of every practice that really is going to exemplify the final two minutes of every game,” Sarkisian said. “Who can we count on? Who are going to be those guys that can make those plays at the most critical moments? It was the best of five, and the defense won the first three plays and got off the field and won the game.”

Dixon not on hand

One Trojans player not in attendance on Tuesday was sophomore tight end Bryce Dixon. A standout during the winter volunteer throwing sessions, Sarkisian said that his absence was due to a student-conduct issue.

Dixon, who caught 14 passes for 198 yards and four touchdowns in 2014, also missed one game last season due to a student–conduct issue.

– Tailback Tre Madden (toe) took part in warm-ups and some individual drills but was limited, and he said following practice that he hopes to take part in contact drills following spring break. Defensive tackle Kenny Bigelow (knee) also appeared to be limited.

– The defense featured a starting group that had John Plattenburg and Leon McQuay III at S, Adoree’ Jackson and Kevon Seymour at CB, Lamar Dawson and Michael Hutching at ILB, Su’a Cravens at SAM LB, Scott Felix at RE, Cody Temple at N, Delvon Simmons at DE and Claude Pelon at DT.

– The No. 1 offensive line had Toa Lobendahn at LT, Damien Mama at LG, Max Tuerk at C, Viane Talamaivao at RG and Zach Banner at RT. Early entrant freshman Chuma Edoga took reps with the No. 2 group at RT. Roy Hemsley saw time in reserve at LT.

– Chris Hawkins spent the majority of the day at safety, and Sarkisian said that he will continue to work there this spring.

– Matt Boermeester and Alex Wood both took turns at placekicker. Conner Sullivan was the holder.

– Dawson, Mitchell and Nico Falah were singled out by Sarkisian for their play on Tuesday.

– Among those in attendance were Buck Allen, Nelson Agholor, Damian Williams, Iman Marshall and Clayton Johnston.