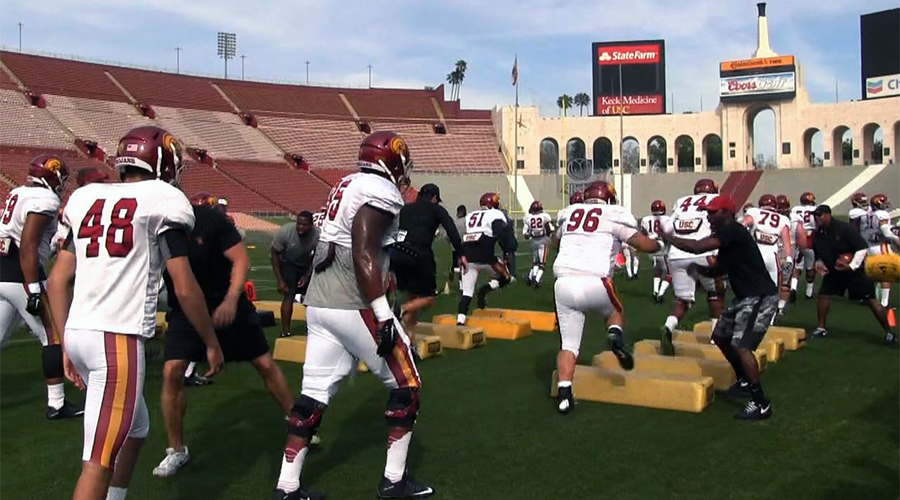 The Trojans were inside the Los Angeles Memorial Coliseum on Tuesday, taking part in a two-hour practice session that, with the team in full pads for the first time this spring, featured five forced turnovers by the USC defense, including two interceptions by cornerback Adoree’ Jackson.

“The biggest positive from a defensive standpoint was creating five turnovers,” said USC head coach Steve Sarkisian. “It’s been a point of emphasis. It’s something I challenged the defenders on after Practice 1 and 2. I thought we missed some opportunities where we weren’t catching the ball. Today, obviously, guys made some really good plays.”

But Sarkisian’s offense made their fair share of highlight plays as well, with USC quarterback Cody Kessler showing good chemistry with his receivers. The fifth-year senior passer started the session off with a 60-yard touchdown bomb to wide receiver JuJu Smith, and the Trojans running backs had their best day of the spring so far, with tailback Justin Davis setting the tone early with some nifty runs, and fullbacks Soma Vainuku and Jahleel Pinner making their presence felt in a variety of ways. It was Vainuku, in fact, who came up with the play of the day, hauling in a pass from Kessler to give the offense a 3-2 victory over the defense in the session-ending challenge.

“Both of those guys are versatile players,” Sarkisian said. “Jahleel [Pinner] had a great catch for a touchdown early in practice. We obviously saw Soma [Vainuku] with a big catch there to end practice. So, they give us that versatility where we can stretch the field with them, we can run the power game with them with two backs, we can give them some carries…It’s a real luxury for us to have.”

With Davis, Vainuku and Pinner doing their part, and the offensive line having a strong day as well, Kessler said that he was able to hit his targets with greater ease.

“When everything is clicking, it’s so much easier,” Kessler said. “You know, when our run game is working like it did today, and [Max] Tuerk has the offensive line going, it’s just so much easier for the pass game. And when guys are running the right routes, guys are really starting to get the install, and starting to memorize the plays, it seems like it’s run a lot faster and it makes it a whole lot easier for me.”

– Antwaun Woods (pectoral muscle), Chad Wheeler (knee) and Anthony Sarao (foot) were among those who did not participate. Linebacker Jabari Ruffin (knee) and defensive lineman Kenny Bigelow (knee) suited up in full pads, but both were extremely limited, although Bigelow did look good in some of the individual drills that he participated in. Tre Madden (toe) continued to be limited as well.

– Still no update on the status of tight end Bryce Dixon, who has missed the entirety of the spring so far due to a student-conduct issue.

– Chris Hawkins lined up at free safety with the No. 2 defense for a majority of the day.

– Linebacker Quinton Powell, who lined up with the No. 2 defense at SAM linebacker, had a strong day, making a number of stops near or behind the line of scrimmage, and also collecting an interception.

– Kessler hit Smith for a 60-yard touchdown bomb during the first 11-on-11 period of the day.

– Davis run inside for a gain of seven or eight yards.

– Kessler hit Pinner over the middle for a 30-yard touchdown.

– Powell stopped Vainuku for no gain.

– Kessler hit Steven Mitchell over the middle for a gain of around 30 yards.

– Kessler connected with Isaac Whitney for close to 15 yards before Jonathan Lockett made the stop.

– Davis bounced outside and made two defenders miss before picking up close to 20 yards.

– Hawkins tackled Toland for a loss.

– Ricky Town hit Aaron Minor for a gain of 30 yards with Lamont Simmons in coverage.

– Powell collected an interception on a Browne pass.

– Kessler threw outside, but Jackson was there to make the pick-6.

– Greene connected with Robby Kolanz over the middle for a first down.

– A little later Town threw outside, and he had his pass picked off by Jalen Jones.

– Kessler hit Smith over the middle for a gain of around 15 yards.

– Kessler connected with Mitchell for a gain of close to 40 yards with John Plattenburg in coverage.

– Kessler went deep to Smith along the sideline, but Kevon Seymour broke the pass up.

– Browne hit Christian Tober for a gain of close to 20 yards.

– Davis had a nice run outside for 15 yards.

– Powell got past Edoga and sacked Browne.

– Browne connected with Smith for a gain of 15 yards.

– Browne threw outside to Minor, but Jackson made a diving interception.