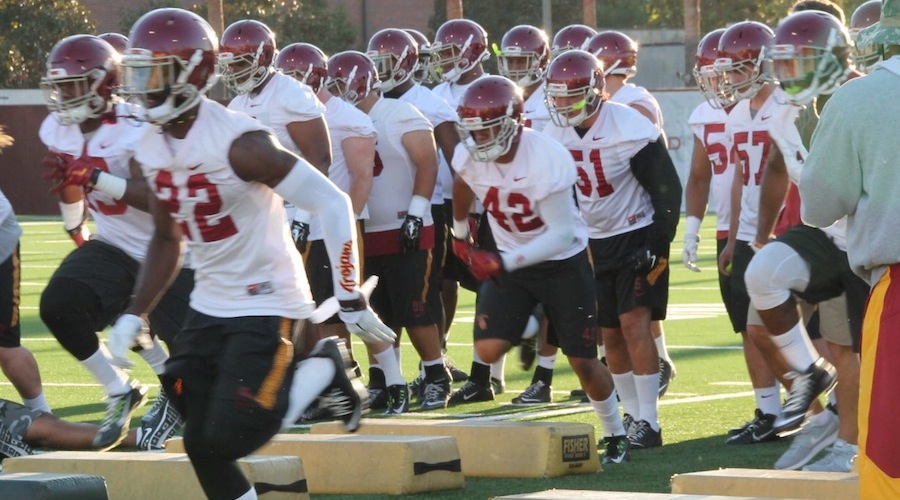 With a pivotal Pac-12 clash with No. 23 Oregon looming this Saturday, the No. 22 Trojans were all business on Tuesday as the team took part in a high-energy, shorts-and-shoulder pads practice session on campus.

Defensively, there was a special focus on stopping the run – not surprising considering the fact that the Ducks feature a potent offensive attack that is spearheaded by the nation’s No. 7 rusher in Royce Freeman (139.2 yards per game).

“I loved the energy, and really the attention to detail that the kids brought today,” said USC head coach Clay Helton. “It was a really important day for us. You saw us focus on the run game immensely today. We feel like we’re playing one of the premier run teams. Reminds me a lot of the Arizona bunch. They can spread you out and run the ball anywhere, so we had a real primary focus on that today.”

But Helton is well aware that there’s much more to Oregon’s offense than just Freeman. In fact, the player who Helton might be most concerned with is Ducks quarterback Vernon Adams. Oregon is 4-0 since the mobile 5-foot-11 passer returned to the starting lineup from a broken finger, and he was particularly impressive in the team’s 38-36 upset victory over Stanford this past Saturday, completing 10 of 12 passes for 205 yards and two touchdowns.

“I’m extremely impressed with how he’s managing the team,” Helton said. “I’m extremely impressed with how he creates in the pocket. He’s got that unique ability to escape pass-rush, and still keep his eyes downfield. You saw that in that Stanford game. He had some big-time explosion passes by just keeping the ball alive and finding men downfield. So, I think he makes the whole thing tick. They have tremendous skill athletes around him, but their success, a lot is based on that quarterback position.”

So how do the Trojans defend against the Ducks? According to Helton, the Trojans will likely stick with what has been working for Justin Wilcox’s group as of late.

“Our M.O. has been to shut down the run, and put it on the quarterback to win in the passing game,” Helton said. “And then when that happens, just like we’ve done in the last five games, we’ve seen 19 sacks. When you’re getting to the quarterback, you’re getting him off his spot, you’re sacking him, and he’s more worried about the rush than the receivers downfield, that’s been our key and our M.O., and I think that’s one of the big reasons for our success right now.”

With Cameron Smith (knee) and Lamar Dawson (shoulder) now both sidelined for the season, the search for someone to fill the starting inside linebacker position opposite Anthony Sarao officially began on Tuesday.

There was a steady rotation throughout the day at both inside linebacker positions amongst a mix of players that included Sarao, Olajuwon Tucker, Osa Masina, Michael Hutchings, Joel Foy and Uchenna Nwosu – who slid over from his normal ‘sam’ linebacker position.

Nwosu was singled out for his play following practice by Helton, but as of now, the job is still up for grabs.

“I think we’ll go through the week and then see where we’re at,” Helton said. “Obviously you want to feel comfortable that that young man knows the position well. If he does, obviously this is a team that can run a lot of plays, as proven, and obviously we’re going to have to roll a little bit. But the number of reps will probably be based on practice throughout the week, and how comfortable the young man is playing the position.”

Chris Brown takes reps with the ones

With Viane Talamaivao sidelined with a torn meniscus, redshirt freshman Chris Brown lined up with the first-team offense at right guard on Tuesday, and he appears to be on pace to potentially start against the Ducks on Saturday.

Having seen sporadic action in games throughout the season, it’s a challenge that he’s more than up for.

“I feel prepared and confident with how I’m playing right now,” Brown said. “We go fast in practice, but it’s been good getting in, even if it’s 10 to 20 snaps per game. It’s just good getting a feel for being in an actual game and going fast.”

– Among the other players who did not participate in practice on Tuesday were John Houston Jr. (back), Matt Lopes (foot) and Tre Madden (knee).

– Freshman tight end Caleb Wilson came up with the arguable play of the day, hauling in a 35-yard touchdown pass from Sam Darnold over Hawkins in the back of the endzone.

– Placekicker Alex Wood had the day off. Matt Boermeester connected on all three of his attempts during a late field goal period. His longest attempt was from 38 yards out.

– USC athletic director Pat Haden was among those in attendance, as were scouts from the Jacksonville Jaguars and Tennessee Titans.

– Justin Davis ran inside for a gain of 5 yards.

– Ronald Jones II ran outside for a gain of 5 yards.

– Masina stopped Ware for no gain.

– Cody Kessler hit Darreus Rogers outside for a 10-yard gain.

– Kessler hit Jalen Green outside for a gain of close to 10 yards before Kevon Seymour made the stop.

– Kessler connected with JuJu Smith-Schuster outside for a gain of around 15 yards.

– Kessler hit Tyler Petite over the middle for a gain of 10 yards before Masina made the stop.

– Kessler hit Rogers outside for a gain of close t0 20 yards before Seymour made the stop.

– Kessler hit Petite over the middle for a gain of 15 yards before Lockett made the stop.

– Smith-Schuster made a nice sliding 20-yard catch on a pass from Kessler.

– Jones ran outside for a gain of over 15 yards.

– Jones runs inside for a gain of close to 20 yards.