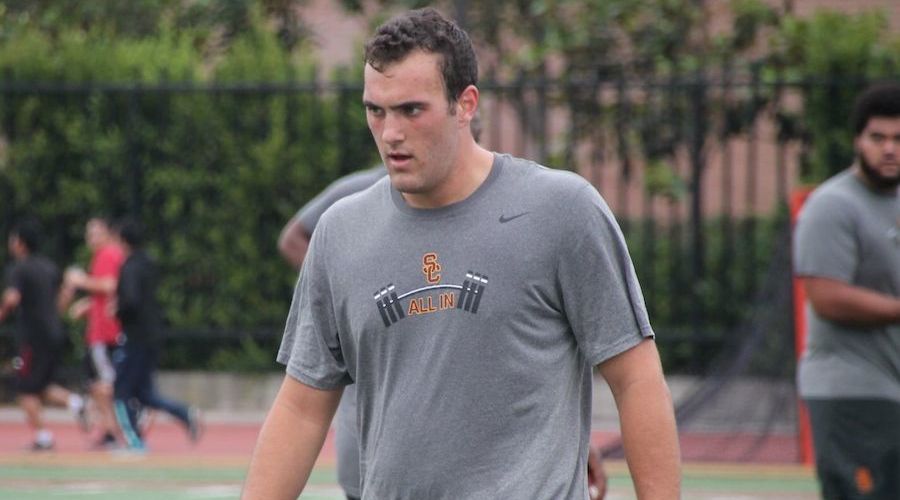 * The throwing session got started this morning with a lot of work for Tyler Petite as 3 of the first 6 passes went his way. Taylor McNamara did not take part in drills (and Daniel Imatorbhebhe has not gone yet this summer) so Tyler was the only scholarship tight end on the field.

* Tyler Vaughns caught a crossing route from Sam Darnold, Tyler sure looks smooth out there.

* Max Browne tried to hit Vaughns a couple plays later but Leon McQuay was there for the pass break-up.

* Darreus Rogers made his first throwing session appearance of the summer.

* Play of the day was a deep pass from Darnold to Vaughns where Tyler got behind Jackie Jones for the score.

* Darnold hit Reuben Peters on a quick hitch over the middle, a nice play by Reuben to reach back for the ball to make the catch.

* There was no Noah Jefferson today so Jacob Daniel went with the 1’s at nose. Also, Chad Wheeler did not take part so it was Zach Banner at LT with Chuma at RT.

* Once again there was a lot of work on running plays.

* Matt Fink tried to get a ball deep but it was underthrown and Jones was in position to make the pick but it was dropped, and Jackie immediately went to the ground to do his push-ups.

* Fink came right back and had to scramble a little before hitting Vaughns on a crossing route.

* Browne to JuJu Smith-Schuster at the sideline, JuJu with a nice job to dot the I before going out of bounds.

* Browne tried to hit Jalen Greene down the right sideline but Ajene Harris was there to make the interception.

* Uchenna Nwosu came on the rush, the ball from Browne was tipped in the air, Nwosu made the pick and returned it for a score.

* Osa Masina batted down a Darnold pass at the line.

* Browne and Darnold stayed afterwards to work on taking snaps from center from Lobendahn and Falah.