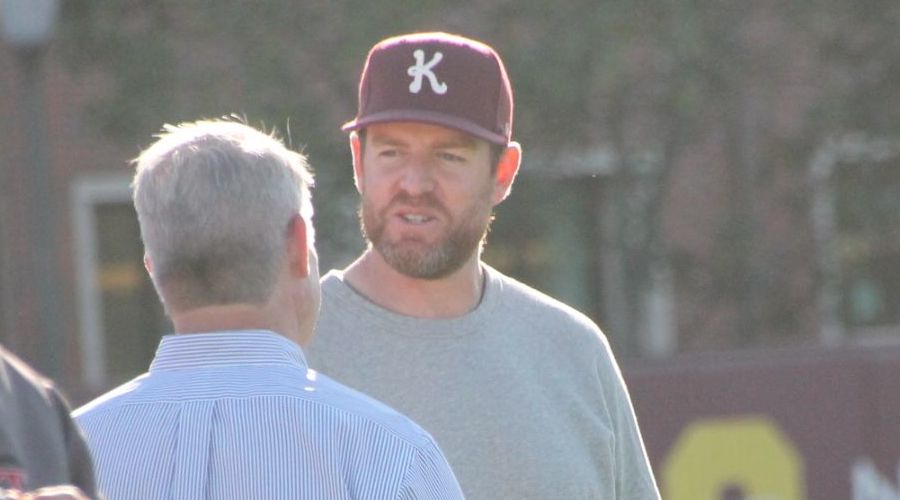 With USC players of the past Carson Palmer, Lawrence Jackson, Eric Torres, De’Quan Hampton and JuJu Smith-Schuster, as well as former head coach John Robinson all watching from the sideline, the Trojans took part in spring practice No. 5 on Thursday on Brian Kennedy-Howard Jones Field. The two-and-a-half-hour, full-pads session featured some physical play during an initial 11-on-11 period, but the team spent a majority of the day gearing up for their first scrimmage of the spring, a live-hitting affair that will take place this Saturday – also on Brian Kennedy-Howard Jones Field.

“It was a very valuable time for us as we go into our scrimmage-type mode,” said USC head coach Clay Helton. “So, this was kind of a prep for us, a review day installation-wise. There was a little third-and-short work, but really it prepped us for what we hope is a great Saturday scrimmage.”

After compiling three interceptions on Tuesday, Jamel Cook had another outstanding workout while running with the No. 2 defense at the Nickelback spot, coming up with two huge hits – one on tailback Chris Edmondson early on, and another on wide receiver Velus Jones later in practice.

“His last two practices have been by far his best,” Helton said of the redshirt-freshman. “He has flashes of real brilliance. And you’ve seen the explosiveness and the physical nature that he brings, and then his length in coverage is something that’s very hard for smaller receivers – he kind of engulfs them. The thing that I’m hoping he gets better at is just his consistency of assignments, and truly learning the system.”

And in what has become the trend so far this spring, Cook wasn’t alone as Clancy Pendergast’s defensive unit appeared to get the better of the offense throughout much of the day – something Helton has taken notice of.

“Offensively I think there is some work to do,” Helton said. “Obviously, you look at Sam [Darnold], you look at RoJo (Ronald Jones II), you look at Deontay [Burnett] and Daniel [Imatorbhebhe], but there is some work that has to be done in the offensive line with some young people, as well as these outside receivers that we’ve got to develop in a hurry. So, right now defensively I see a lot of consistency, and obviously when you’re early in camp with young people you expect the offense to be a little behind, and right now that’s the way it feels.”

– Nico Falah (back) and Porter Gustin (hand) continued to be limited. Falah lined up with the No. 1 offense at center during an initial offensive team period on air, but was replaced throughout the remainder of the day by Cole Smith. Gustin took part in individual drills only.

– Aca’Cedric Ware sat out practice due to a foot sprain and is doubtful to take part in the scrimmage on Saturday.

– Daniel Imatorbhebhe (shoulder) wore a yellow jersey, but appeared to take part in a good portion of practice.

– For the second consecutive session Olajuwon Tucker (academics) took part in practice, lining up at the SAM linebacker spot with the No. 2 defense.

– The No. 1 offense to start the day featured Darnold at QB, R. Jones at RB, D. Imatorbhebhe at TE, Jalen Greene at WR, Burnett at WR, Michael Pittman Jr. at WR, Chuma Edoga at LT, Chris Brown at LG, Falah at C, Viane Talamaivao at RG and Roy Hemsley at RT.

– Lining up at the Predator spot with the No. 1 defense in place of the limited Gustin, Betiku drew praise from Helton following practice for his performance this spring.

“If you watched this practice last year compared to now, it’s night and day,” Helton said. “You’re looking basically at a baby doe that’s turned into a big buck deer. I’ve always believed that confusion creates hesitation, and he’s such an athletic person – his power, speed, explosion – now that confusion is starting to be limited and you can really see his explosiveness off the edge.”

– Helton also lauded freshman offensive tackle Andrew Vorhees and receiver Velus Jones for the way that they’ve performed. It was at least the third time this spring that Helton brought up Jones as a player who has caught his eye.

– Also in attendance on Thursday was current USC athletic director Lynn Swann, as well as Class of 2018 center prospect Justin Dedich (Temecula, Calif./Chaparral). Dedich announced shortly following practice that he received an offer from the Trojans while on his unofficial visit.

– Darnold hit Burnett for a 35-yard TD over the middle.

– Marshall and others stopped Vavae Malepeai after a short gain.

– Smith and Co. stopped Malepeai after a short gain.

– Darnold hit Cary Angeline outside for a gain of 10 yards.

– Edmondson ran outside but Cook leveled him.

– Darnold tried to hit Tyler Petite over the middle, but Ajene Harris broke up the pass.

– Darnold hit Pittman over the middle for 10 yards.

– Matt Fink hit Angeline over the middle for a big gain.

– Fink hit Keyshawn “Pie” Young outside, but he dropped the pass when J. Jones put a hit on him.

– Darnold hit Josh Imatorbhebhe outside for a gain of close to 10 yards.

– Darnold hit V. Jones outside for a gain of around 25 yards.

– Jack Sears hit Young over the middle for 10 yards.

– Darnold hit Petite outside for a gain of around 8 yards.

– Betiku stopped Malepeai for a loss.

– Darnold tried to hit R. Jones outside but Harris broke up the pass.

– Fink hit Malepeai over the middle for a 10-yard gain.

– Darnold tried to hit J. Imatorbhebhe over the middle, but J. Jones broke it up.

– Darnold hit Burnett outside for a gain of around 20 yards.