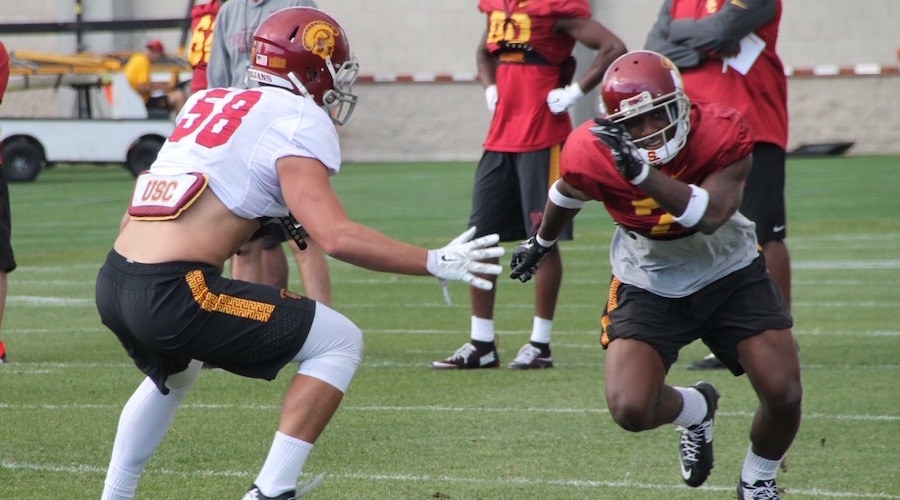 The Trojans were in full pads on Thursday for a two-and-half hour practice session that featured a heavy dose of situational work, including in the final competition period.

With Max Browne leading the No. 1 offense against the No. 1 defense with only 50 seconds remaining on the clock from around midfield, the defense came up big, stopping the offense on four consecutive plays.

Defensive end Malik Dorton’s sack to open the competition was the key play as it put Browne and Co. in a hole that they could never dig themselves out of. Browne followed the initial play by just missing tight end Tyler Petite on a deep pass down the middle of the field, before Dorton combined with Porter Gustin on another sack, with the series ending on an incomplete pass from Browne to Steven Mitchell Jr.

“Great learning lessons for our defense of how important it is to get to the quarterback, and get a sack in that situation,” said USC head coach Clay Helton following practice. “And then it’s a great learning lesson for our quarterback to get the ball thrown out-of-bounds if it’s not there. We take a sack and all of a sudden it’s a drive ender. So, we’re learning as a young team how to win situational football, especially at the end of the game. Like I told the kids, those special plays can win or lose championships.”

Helton, once again, praised the effort of a defensive front seven that has stood out throughout much of the spring, as well as the man responsible for the system that the unit is flourishing in, USC defensive coordinator Clancy Pendergast.

“By Clancy putting them on some edges, those guys get up the field pretty fast,” Helton said. “You know that quarterback feels that. He’s having to step up in the pocket, he’s having to move over and find throwing lanes. They’re doing a nice job with the pass rush. The blitz package that Clancy has put together in this camp has been phenomenal.”

While Browne wasn’t able to direct the offense downfield for a victory in the final period, he performed solidly throughout much of the rest of the day, as did his primary competitor in the quarterback battle, Sam Darnold, with neither player really outshining the other by any noticeable margin.

Following practice Helton said that Browne still holds an edge in the competition, but he was also quick to point out that Darnold is coming off a fantastic Tuesday performance in which he completed a phenomenal 94 percent of his passes.

“I mean, that’s an incredible number,” Helton said. “And so, these kids are playing at a really high level. They’re competing, just like at every other position. I would still say that Max is in the lead, but there’s not a huge gap. I mean, Sam has played good ball. Thank goodness we have four more practices and another training camp to continue to improve both guys.”

With Darnold coming off such a strong Tuesday outing, Helton was asked in the post-practice media scrum what the redshirt-freshman passer needs to do to close the gap with Browne.

“I think his growth of being able to know the plays inside and out on the day-to-day basis, I think, is important for him,” Helton said.

Darnold, who has primarily directed the No. 2 offense this spring, ran one series of plays with the No. 1 offense on Thursday, attempting just one pass – which fell incomplete – in the early team run period.

– John Plattenburg (ankle) and Clayton Johnston (concussion) did not participate in practice.

– Among those who were limited and withheld from contact drills were Michael Pittman (clavicle) and Jonathan Lockett (concussion).

– Noah Jefferson (back) took part in all individual drills, as well the first 11-on-11 team run period, before taking it easy and spending the rest of the day watching from the sideline. In the early 11-on-11 period, which is the first one that Jefferson has participated in since early in fall camp, he took reps with the No. 1 defense at both nose tackle as well as at defensive end, and he appeared to be moving well.

– Chad Wheeler (ankle) took part in the entirety of practice after having been limited in recent days. He spent a majority of the day with the No. 1 offense at left tackle.

– The full No. 1 offensive line group to start the day had Wheeler at LT, Damien Mama at LG, Nico Falah at C, Viane Talamaivao at RG, and Zach Banner at RG. Chuma Edoga continued to take some reps at RT with the ones as well, which sent Banner over to LT.

– Ajene Harris came out in a white defensive jersey on Thursday and spent the entire day at cornerback – taking reps with the No. 2 defense. During one 11-on-11 period he came up and put a nice hit on De’Quan Hampton, drawing cheers from the defensive group. Harris also broke up a pass from Matt Fink in the end zone later in the day.

– After missing Tuesday’s workout due to class, Leon McQuay III was back in action, spending the day with the No. 1 defense at the safety spot opposite Marvell Tell.

– There was a spirited one-on-one blocking drill between the running backs and linebackers, with Justin Davis and Grant Moore getting into it after one rep, and running backs coach Tommie Robinson having to step in to split the two apart.

– Aca’Cedric Ware ran outside for a gain of around 25 yards before McQuay made the stop.

– Darnold connected with Hampton outside for a 25-yard gain with Harris in coverage.

– Darnold hit Hampton with a quick pass outside, and Harris was there in a hurry to make the stop.

– Browne hit JuJu Smith-Schuster, and the big wide out darted outside for a gain of close to 20 yards before Isaiah Langley made the stop.

– Browne hit Mitchell outside for a gain of 7 or 8 yards.

– Darnold ran outside for a gain of close to 10 yards before Deion Hart made the stop.

– Jalen Greene connected with Deontay Burnett along the sideline for a gain of around 20 yards.

– Browne had to scramble and wound up picking up around five yards.

– Fink ran outside for a gain of around 5 yards.

– Browne hit Smith-Schuster over the middle for a gain of close to 10 yards.

– Browne hit Rogers outside for a gain of close to 10 yards.

– Darnold hit Hampton over the middle for 7 or 8 yards.

– Darnold hit Mitchell over the middle for a gain of 10 yards.

– Darnold hit Josh Imatorbhebhe over the middle for a gain of over 20 yards.

– Browne hit Hampton over the middle for 7 or 8 yards before Langley made the stop.

– Darnold hit Daniel Imatorbhebhe for a gain of close to 25 yards.

– Darnold hit D. Imatorbhebhe over the middle for a 15-yard TD.

– Matt Fink tried to hit Smith-Schuster over the middle in the end zone, but Harris deflected the pass.

– Fink hit Isaac Whitney over the middle for a gain of 6 or 7 yards.

– Browne hit Darreus Rogers over the middle for a gain of around 30 yards with Marshall in coverage.

– Browne hit Deontay Burnett for a 50-yard TD along the sideline.

– Darnold hit D. Imatorbhebhe outside for a gain of close to 10 yards.

– Greene hit Petite over the middle for a 60-yard TD.

– Browne hit Rogers over the middle for a 10-yard gain before Matt Lopes made the stop.

– Darnold hit Hampton for a gain of close to 10 yards.

– Darnold hit Hampton over the middle for a 20-yard TD.

– Gustin and Dorton combine for the sack on Browne.