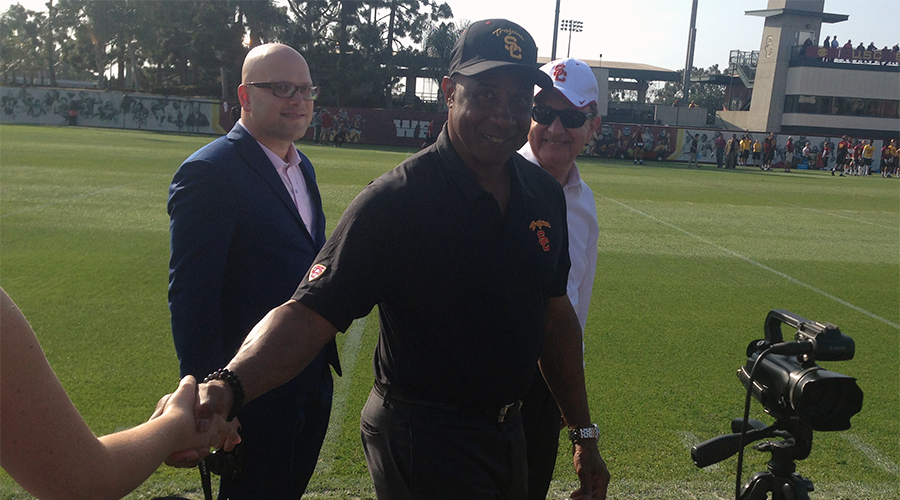 With the spring game coming up on Saturday, the Trojans took part in a light, shorts-and-helmets practice on Thursday, with the major highlight occurring midway through the two-hour workout when Lynn Swann – who was introduced earlier in the day as the successor to Pat Haden as USC athletic director effective July 1 – arrived at practice with university president Max Nikias.

“You know, just having a chance to be around him today, you’ve heard so many great things about him, what a professional he is, the character he exudes, and it spoke volumes today,” said USC head coach Clay Helton. “He exudes what the true Trojan spirit is about.”

After making the rounds on Brian Kennedy-Howard Jones Field, greeting a number of visitors in attendance, Swann gave a brief speech to the team that left a lasting impression on everybody on hand, including Helton.

“It was really about taking advantage of this time here at USC,” Helton said. “That we are here to graduate. We are here to win championships – not just win, but to win championships. That’s where the bar is at. And then the overall experience of what USC is – take advantage of it. From the Trojan Family, to the people that you meet around, the four-year experience, the relationships that you’re going to build with your fellow students – it’s a strong message. It’s what we want with all of our players.”

After some conflicting reports emerged following Tuesday’s post-practice media scrum in which some took an answer provided by Helton to mean that he would name a starting quarterback from the competition between Max Browne, Sam Darnold, Jalen Greene and Matt Fink shortly after the spring game, the USC head coach clarified the situation on Thursday, noting that is not necessarily the case.

Apologizing for the confusion, Helton said that he will only name a starter if a huge gap develops between one competitor and the rest of the field in the spring game. Otherwise, the competition will extend on into fall camp.

“I do want to get through this spring game, and I do want to see where our quarterbacks are, and see how they function in that spring game, with that T.V., with the crowd that’s all around, and if I come out of there and there’s a huge separation, yeah, I will name a quarterback,” Helton said. “But if I don’t think that there’s a great separation, it will go to [fall] camp.”

Helton has said in recent days that Browne holds a lead over Darnold, but not a significant one, making it seem likely that the competition will continue on into fall camp.

Due primarily to the current lack of depth along the defensive line, Helton said that the team will not take part in a traditional scrimmage on Saturday in the spring game finale. Instead, the format will include a number of situational 11-on-11 scenarios. There will, however, still be plenty of live contact.

“We’ll control it,” Helton said. “And what I mean by that is we’ll have a coming out period, which means put the ball on the two, and the offense has got to try to get it to the 22. A red zone period – put the ball on the 25 and let’s drive it into the end zone. A run, play-action period…those type of set-ups that we’re actually playing live ball, we’re moving the ball, you’re going to be able to keep stats, but it allows me to control it, rather than all of a sudden you see a 14-play drive and there’s an injury.”

The spring game begins at 3:00 p.m. on Saturday in the Los Angeles Memorial Coliseum.

– Helton said that Noah Jefferson (back) will participate in 25 to 50 percent of the spring game.

– Jonathan Lockett (concussion) will undergo tests on Friday, but is likely out.

– John Plattenburg (ankle) is out.

– Osa Masina (hamstring) and John Houston Jr. (back) will take part in 50 to 75 percent of the spring game.

– Safety Chris Hawkins, who is coming off post-season ankle surgery, ran sprints on the sideline for the second consecutive day.

– Ajene Harris continued to line up exclusively at cornerback.

– Freshman receiver Josh Imatorbhebhe came up with the arguable play of the day, leaping and reaching up high to snag down a Darnold pass over the middle for a gain of around 20 yards with Yoofi Quansah in coverage.

– Kicker Matt Boermeester had a solid day, going 4-for-5 during a field goal period – including 1 of 2 from the 45-to-50 yard range, and 1 of 1 from just over 50 yards out. In a one-minute drill to end practice he missed an attempt from around 50 yards out that was wide right, before connecting on another from around 45 yards out.

– Justin Davis ran up the middle for a gain of 5 or 6 yards.

– Browne hit Darreus Rogers outside for close to 10 yards.

– Ronald Jones II ran outside for a gain of 6 or 7 yards before Olajuwon Tucker made the stop.

– Green hit Steven Mitchell Jr. outside for a gain of 7 or 8 yards.

– Daniel batted down a Darnold pass at the line.

– Darnold hit Tyler Petite outside for a gain of 30-plus-yards.

– Malik Dorton tipped a Max Browne pass at the line and it fell incomplete.

– Browne hit Rogers over the middle for a gain of 10 yards with Iman Marshall in coverage.

– Browne tried to hit De’Quan Hampton outside, but Isaiah Langley made a nice play on the ball and deflected it away.

– Darnold hit a wide-open Jones outside and he darted downfield for a 70-yard touchdown.

– Darnold scrambled and ran for 7 or 8 yards before Osa Masina made the stop.

– Darnold hit a wide-open Taylor McNamara down the middle of the field for a gain of over 35 yards.

– Browne hit JuJu Smith-Schuster outside for a gain of close to 10 yards.

– Browne hit Smith-Schuster outside for a gain of 8 or 9 yards.

– Browne hit Petite over the middle for 7 or 8 yards.

– Browne hit Rogers over the middle for a gain of 10 yards.

– Darnold hit Isaac Whitney deep along the sideline for a 60-yard gain.

– Rasheem Green applied pressure on Darnold, forcing him to throw the ball away