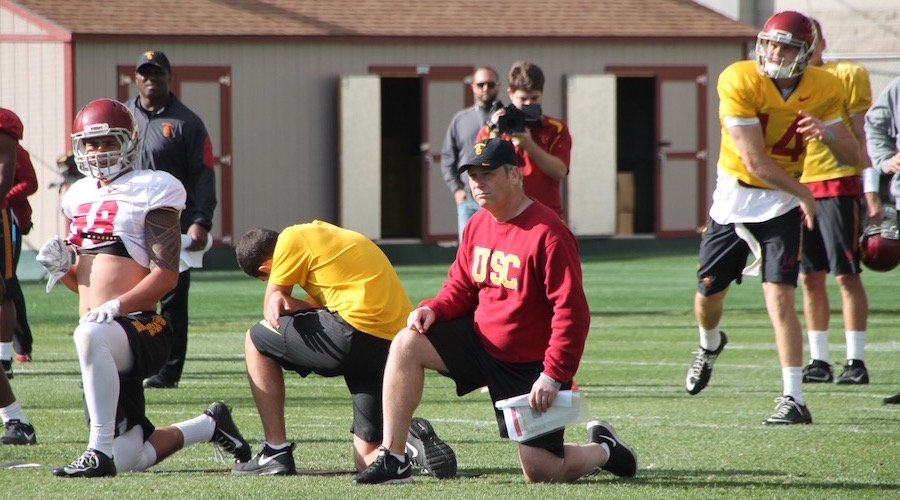 It was a big day for the USC defensive unit on Thursday as they put together what Trojans head coach Clay Helton called their best showing “by far” of the spring so far.

Not wasting any time, Clancy Pendergast’s group started things off by forcing three turnovers in the opening 11-on-11 period, with cornerback Isaiah Langley picking off a Max Browne pass that was tipped at the line, safety Deion Hart coming up with an interception on a Jalen Greene pass that was also deflected, and Michael Hutchings recovering a ball that Max Browne appeared to fumble.

Maintaining that level of play throughout the two-and-a-half hour, full-pads practice, the defense capped the day off by stopping the offense as they attempted to march down the field in a four-minute drill in the competition period.

Helton made a special point of praising the effort of the defensive line corps, which he said took a “huge step forward,” before noting how impressed he was with the way that the defense, as a whole, communicated  – something he believes had a huge impact on their performance.

“I’m proud of them,” Helton said. “It was neat to stand over that ball and hear some leaders starting to emerge. To see Uchenna [Nwosu] starting to emerge. Porter Gustin starting to emerge, and really being vocal and confident. [Michael] Hutchings, his senior leadership of getting everybody lined up. The two safeties in Leon [McQuay] and Marvel [Tell] starting to communicate. I thought at one point in time they were both mutes. Now they’re starting to talk to one another, and really communicating with the whole defense. And as they do that, we become a better football team. [They made] tremendous strides today.”

Helton believes that the ability of his players to communicate with each other, as well as with the coaches, has been aided by the fact that music is no longer being played during practice, as it had been in recent years during each workout at USC.

“There’s a time for that,” Helton said. “You know, pregame – great, have music. Sometimes after that game, if you get the big victory – music. But in this setting right now, it’s all about ball. And it’s about us playing the game that we love, and getting better in technique and fundamentally. That’s what spring football is.”

Helton eager to see more of quarterbacks in scrimmage settings

With the defense playing at such a high level, neither Max Browne or Sam Darnold were able to make too much of a statement on Thursday as they continue to battle one another, as well as Jalen Greene and Matt Fink, for the vacant starting quarterback position.

Helton was, however, asked to provide an update on the highly publicized battle. The Trojans head coach said that while Browne would still have to be considered the leader, the competition is too close to call, particularly with Darnold having strung together some extremely solid outings over the course of the last week.

“There is a gap, and obviously I think Max is in the lead right now, but you look at the plays that Sam has made over the last couple practices, he is flashing some brilliance out there, and we’ll see,” Helton said.

Having previously stated that he would only declare a winner this spring if there was a huge gap between the top performer and everyone else, Helton noted that he wants to see how the quarterbacks do in the final three Saturday practices, which will feature more live scrimmaging and game-like situations than a normal workout, before he knows whether or not he will be able to declare a winner.

“I just know how I feel right now,” Helton said. “If there was a huge, huge gap right now, I’d probably do something, but right now both kids are battling, and I’d really like to have three more scrimmages, and then make that decision of what we do, and when we announce it.”

– After taking part in Tuesday’s practice in a limited capacity, linebacker Osa Masina (hamstring) got full contact work in for the first time this spring. He took part in all individual drills as well as the first live 11-on-11 period before taking it easy over the last half of practice – spending some time stretching out and working with a trainer. Moving well, he lined up at WILL linebacker on the inside, taking some reps with the No. 1 group alongside MIKE linebacker Michael Hutchings.

– After missing Tuesday’s practice with a MCL strain, Uchenna Nwosu returned to full-time duty on Thursday, running exclusively with the No. 1 defense at SAM linebacker.

– Wide receiver Steven Mitchell Jr. and tailback Ronald Jones II did not practice due to illness.

– Others who did not practice included John Plattenburg (ankle), Noah Jefferson (back) and Clayton Johnston.

– The No. 1 interior defensive line group on Thursday consisted of Jacob Daniel at nose tackle, with Rasheem Green and Malik Dorton at the two defensive end positions.

– After missing the team’s Tuesday practice due to class, McQuay returned to action and ran with the No. 1 defense at one safety spot, with Tell at the other.

– While Masina did take some early reps with the No. 1 group at WILL linebacker, Quinton Powell still took the vast majority of the reps there on Thursday.

– Freshman wide receiver Josh Imatorbhebhe came up with the play of the day in a 7-on-7 period, making a beautiful one-handed grab over Isaiah Langley in the corner of the end zone – on a pass from Browne.

– During a field goal period Matt Boermeester connected on 5 of 6 attempts – all from 36 yards out. Darnold served as the holder.

– The Trojans next practice on Saturday at 10 a.m. With the team having suffered a rash of injuries, Helton will limit the amount of scrimmaging the team gets in.

“It’s not going to be a 100-play scrimmage,” Helton said. “We’re going to put them in certain situations, play some live football, and do some individual drills. I just don’t want 100 plays, and all of a sudden we wind up with three more injuries. So, we’ve got to be careful, but get good, physical work.”

– Browne connected with De’Quan Hampton over the middle for a gain of 20-plus yards.

– Langley made the pick on the tipped pass from Browne.

– Browne hit Ajene Harris over the middle for a gain of 15 yards.

– Hart came up with the interception of the tipped Greene pass.

– Darnold hit Darreus Rogers over the middle for a gain of 8 or 9 yards.

– Darnold hit J. Imatorbhebhe outside for a gain of close to 10 yards.

– James Toland was stopped by Rector and Hart for a loss.

– Matt Fink hit Deontay Burnett over the middle for a 10-yard gain.

– Browne hit Taylor McNamara over the middle for a gain of 11 or 12 yards.

– Darnold hit J. Davis over the middle, but Hutchings was there to stop him after a short gain.

– Browne hit Tyler Petite over the middle for a gain of 10 yards before Tell made the stop.

– Darnold hit Petite over the middle for a gain of close to 15 yards before Tell made the stop.

– Browne hit Harris over the middle for a gain of 9 or 10 yards.

– Browne hit J. Davis outside for a gain of 5 or 6 yards before Powell made the stop.

– J. Davis made a nice cutback at the line and ran into the end zone untouched for a 3-yard TD run.

– Darnold hit Harris over the middle for a gain of 15 yards before Olajuwon Tucker made the stop.

– Browne hit Harris outside for a gain of 20 yards.

– Browne tried to hit Burnett in the corner of the end zone, but Iman Marshall made a nice play and broke the pass up.

– J. Davis ran outside and dragged some defenders for a gain of 8 or 9 yards.

– Browne tried to hit Petite over the middle, but with Hutchings in coverage, the pass fell incomplete.