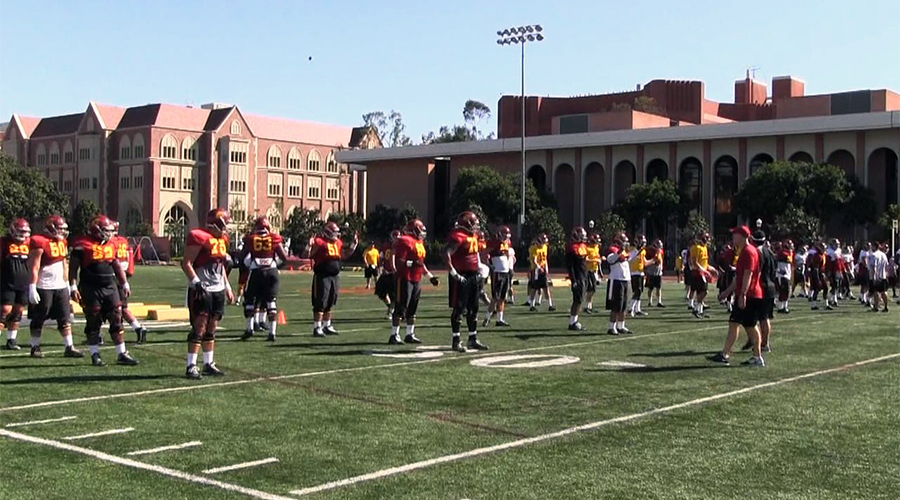 After impressing their head coach with their efforts on Tuesday following a one-week break from spring drills, the Trojans were back at work on Cromwell Field on Thursday, picking right up where they left off.

“I was really proud of the guys that they responded the way they did after Tuesday – having a really good practice,” Steve Sarkisian said. “We challenged them. You can do it once, but the really good teams can come back and do it again and again and again. I thought the guys did that today.”

Practicing in shorts, shoulder pads and helmets, the session reached its climactic conclusion when wide receiver JuJu Smith made a beautiful touchdown grab on a deep pass from Cody Kessler on the final play of the day.

Smith had one of his better workouts of the spring, and afterwards Sarkisian praised the sophomore’s play, while also noting that, having been forced to wear a cast on his left thumb this spring following post-season surgery, he isn’t even at his best right now.

“He’s playing really well,” Sarkisian said. “The guy plays with a cast on his thumb every day, so his ability to catch the ball probably isn’t being shown as naturally as it will when he finally gets his cast off. He has an unbelievable work ethic. The guy plays so hard every day, and competes his tail off every play, and he’s been a go-to guy.”

But Smith isn’t the only player who has shown some toughness by playing through some pain this spring, and Sarkisian believes that it’s a trait that could help pay off in big dividends for the Trojans down the line.

– Adoree’ Jackson spent the day at wide receiver. With Jackson on the offensive side of the ball, both Chris Hawkins and Jonathan Lockett alternated between the starting safety position next to John Plattenburg, and the starting cornerback spot opposite Kevon Seymour. Leon McQuay III spent the majority of the workout with the No. 2 defense at safety.

– Seymour had another strong day, breaking up a number of passes. He had two really nice deflections that came on passes intended for Steven Mitchell late in the session.

– The secondary, as a whole, looked sharp on Thursday. Walk-on cornerback Jalen Jones had one of the plays of the day, making an interception on a deep Max Browne pass over the middle that fellow Gardena (Calif.) Serra product, Adoree’ Jackson, appeared to have in his hands before the quick-thinking Jones snagged it away at the goal line. Jones almost intercepted another Browne pass attempt a little later, but wide receiver Isaac Whitney momentarily turned into a defensive back and prevented him from making the pick.

– Whitney, who arrived on campus this past January as a mid-year enrollee from Riverside (Calif.) City College, had what was likely his best practice of the spring so far. During an early one-on-one period he got the better of Jones, breaking free over the middle and hauling in a 50-yard touchdown pass from Browne. He also caught a pass along the sideline for a big gain, as well as a 10-yard touchdown in the back of the end zone.

– Olajuwon Tucker continued to line up with the No. 1 defense at WILL linebacker, alongside MIKE linebacker Lamar Dawson.

– After sitting out the last two practice sessions due to a hamstring injury, wide receiver Ajene Harris returned to action.

– Cornerback Lamont Simmons sat out of practice due to a hamstring injury.

– After getting a lot of work in during a physical Tuesday practice, running back Justin Davis had a light day on Thursday. With Davis taking a break from most of the action, fullbacks Soma Vainuku and Jahleel Pinner received plenty of opportunities to carry the ball and to catch it coming out of the backfield.

– Sarkisian on his reaction to the documents that were unsealed on Wednesday by the court in the Todd McNair v. NCAA lawsuit:

“I haven’t read one piece of it at all. It really doesn’t pertain to us. My goal every day is getting our team prepared to practice really well, and what we need to do to become a better football team come the fall. So, it’s really out of my hands, quite honestly.”

– Kessler connected with Steven Mitchell outside for a gain of six or seven yards.

– Kessler hit Darreus Rogers over the middle for a gain of close to 10 yards.

– Kessler hit Jackson with a quick pass outside, and he bounced it out along the sideline and sprinted off for a big gain.

– Browne swung a pass out to Pinner, but Quinton Powell was there to limit the play to a short gain.

– Browne hit Harris for a 10-yard gain before Don Hill made the stop.

– Vainuku ran up the gut for a physical nine-yard gain before Lockett and others made the stop.

– McQuay came in on a blitz and stopped James Toland IV for a loss.

– Vainuku with the carry, but Dawson stopped him for no gain.

– Kessler connected with Smith over the middle for a gain of around 15 yards.

– Vainuku with another tough run for close to 10 yards.

– Kessler swung a pass outside to a wide-open Pinner, who darted off 20 yards for a touchdown.

– Browne connected with Robby Kolanz outside for a 20-yard gain.

– Kessler hit Smith over the middle for a 15-yard gain with Seymour in coverage.

– Kessler tried to connect with Mitchell outside, but Seymour read it perfectly and knocked the ball away.

– Kessler hit Rogers over the middle, but Hawkins came up in a hurry and laid a nice pop on him.

– Seymour broke up another Kessler pass attempt outside to Mitchell.

– Browne hit Jackson over the middle for a 20-yard touchdown.

– Claude Pelon and Co. stopped Toland for a loss.

– Toland ran for a 10-yard touchdown.

– Browne threw to Jackson in the corner of the end zone, but Matt Lopes broke up the pass.

– Kessler swung a pass outside to Vainuku, who found plenty of daylight and ran for a 20-yard touchdown.

– Pinner ran for a 10-yard touchdown.