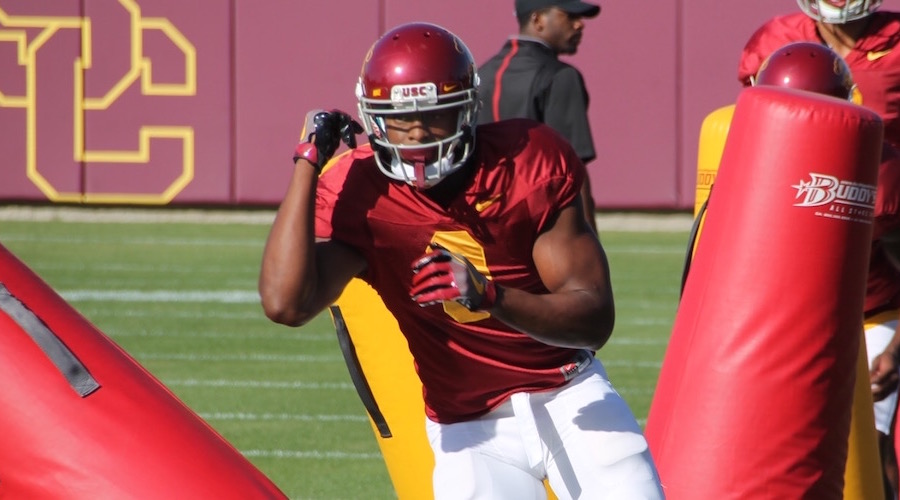 With USC set to host Cal in a rare Thursday night game this week, Clay Helton’s team hit Brian Kennedy-Howard Jones Field to take part in a full pads practice session on Sunday that mirrored what a typical Tuesday workout looks like.

Coming off a bye that gave the Trojans head coach the luxury of resting some key performers, Helton said that he was pleased with what he saw from his team.

“Any time you go seven games straight, you’re going to get some bumps and bruises, and I can just see by how they were running around today that they’re fresh,” Helton said. “They’re bouncing, there’s great energy and great juice. That comes from being one game out of first place in the [Pac-12] South, and getting some rest. You know, you’re in contention, and you feel a little bit fresher, and you’ve got a Thursday night game that everybody is going to be watching.”

One of those players who was back in action was star wide receiver JuJu Smith-Schuster, who suffered a back injury in the Trojans’ victory over Arizona.

After watching from the sideline last week, the talented junior took part in the entire practice on Sunday, showing no sign of injury during the two-hour session. He looked great from the get-go, hauling in a deep touchdown pass down the seam during a service team period – on a play where he really showed off his speed.

“I feel like I’m 100 percent,” Smith-Schuster said. “I came out here today and I felt like I was able to run 100 yards-after-100 yards. You had a period where we were just throwing deep balls, and it felt great just to be back.”

One other key member of the USC offense remained out, however, in tailback Justin Davis. The senior suffered a high ankle sprain against Colorado on Oct. 8, and he’s been sidelined ever since.

During the bye week Helton expressed hope that Davis would be able to return in time to face Cal, and while he was finally out of a boot on Sunday, the USC head coach did not sound optimistic.

“Justin Davis is still hobbled,” Helton said. “He is 50-50 at best for this game – probably a little bit less than that to be honest with you.”

One player who was noticeably absent on Sunday was reserve outside linebacker Jabari Ruffin. Following practice Helton revealed that the redshirt-senior out of Downey has been suspended from all team activities due to a student-conduct issue.

No further information was provided.

“I cannot go into details about it,” Helton said. “I don’t have a crystal ball on if and when he can return.”

– In addition to Smith-Schuster, others who returned to practice on Sunday after resting due to injury last week were Jordan Simmons (knee), Olajuwon Tucker and Aca’Cedric Ware.

– Safety Leon McQuay III (hip/groin) remained limited, although Helton noted that he was able to get more work in than he did last week.

– Cornerback Ajene Harris was held out after banging knees last week. Helton has hope that he will be able to return on Monday.

– With Ruffin absent, Tucker appeared to get the bulk of the snaps with the No. 2 defense at the SAM outside linebacker spot.

– For the third consecutive practice session Stevie Tu’ikolovatu appeared to be taking the vast majority of snaps with the first team ahead of Josh Fatu. Fatu ran with the No. 1 unit throughout a majority of the workouts leading up to the Arizona game, and he wound up starting against the Wildcats.

– Sam Darnold and the quarterbacks spent time working on a ball security drill where they simulated running while another player or coach continually tried to pry the ball loose from their arms.

– Freshman cornerback Jack Jones had a very solid day, particularly in the final 11-on-11 period of the session. He did an outstanding job of forcing an incomplete pass on a deep toss from Darnold to De’Quan Hampton, on a play where Hampton had the ball in his hands before Jones popped it loose before he could gain complete possession. A little later, Dominic Davis ran outside for what looked like a nice gain, but Jones reached in and stripped the ball out for a fumble, with Keyshawn “Pie” Young making the recovery. Jones also blocked a field goal attempt during a special teams period.

– Freshman wide receiver Trevon Sidney also came up with one of the plays of the day during a service team period against the No. 1 defense, leaping high to snag a Matt Fink pass at the goal line away from Marvell Tell, who was poised to make the interception.

– Darnold hit Smith-Schuster over the middle for a gain of around 15 yards.

– Jalen Greene made a nice leaping grab along the sideline for a gain of 15 yards or so on a pass thrown by Darnold.

– Ronald Jones II ran right for a gain of 6 or 7 yards before Jonathan Lockett made the stop.

– Porter Gustin and others stopped Jones for no gain.

– Max Browne hit Isaac Whitney outside for a gain of 10 yards.

– Browne tried to go back outside to Whitney, but Isaiah Langley broke up the pass.

– Jones ran outside for a gain of 7 or 8 yards before Young made the stop.

– Darnold hit Smith-Schuster in the corner of the end zone for a 35-yard TD with Ykili Ross in coverage.

– Darnold hit Michael Pittman over the middle for a 10-yard gain.

– Aca’Cedric Ware ran up the middle for a gain of close to 10 yards.

– Browne hit Sidney outside for a gain of around 10 yards.

– Darnold hit Pittman outside for a gain of close to 10 yards.

– Darnold hit Tyler Petite over the middle for a 35-yard TD.

– Darnold threw a deep pass that Hampton appeared to have in his hands before Jones popped it loose to make it incomplete.

– Darnold hit Burnett outside for a 10-yard gain.

– Darnold hit Daniel Imatorbhebhe down the middle for a 35-yard TD.

– D. Davis ran outside before Jones stripped the ball, and Young made the recovery.

– Browne hit Pittman over the middle for a gain fo close to 10 yards.

– Malepeai ran outside for a gain of over 10 yards.

– Browne hit Tyler Vaughns outside for a gain of around 10 yards on the last play of the day.