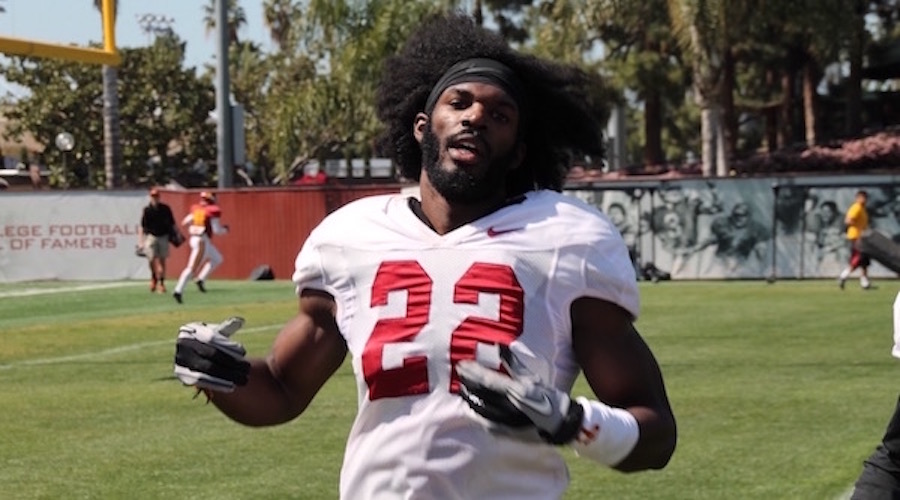 The Trojans were in full pads for the first time this spring on Saturday, and as to be expected, the two-and-a-half hour practice session was marked by plenty of physical play, not to mention a pretty dramatic ending.

Max Browne completed a 35-yard touchdown pass to JuJu Smith-Schuster in the corner of the end zone on the final rep of the final five-play challenge, giving the offense a 3-2 victory over the defense.

But as Clay Helton noted after practice, Clancy Pendergast’s defensive group definitely seemed to get the better of the offense throughout a majority of the day. In the final five-play challenge senior safety Leon McQuay III came up huge, corralling in two Browne pass attempts for interceptions, and returning both for touchdowns. Cornerback Isaiah Langley also intercepted a pass thrown by Browne during an earlier 7-on-7 period.

“What I told the offense today, they may have won that battle, but I thought the defense won the war,” Helton said. “I really did. I thought they brought a physicality and a toughness, and created turnovers, which hadn’t been happening, really, in the first two practices – especially there in that competition period. So even though the defense lost 3-2 there at the end, I thought on the day, they were terrific.”

Along with Rasheem Green, Uchenna Nwosu and Porter Gustin, McQuay was one of four defensive players praised by Helton following practice for his play.

“That was big – to see Leon come up with two plays like that made me a happy person,” Helton said. “You know, to be out here and really show where he kind of left off when Clancy was here the last time, making great plays towards the end of practice.”

McQuay’s performance over the course of the last two practices has come as a surprise considering it originally sounded like he could miss the entire spring due to a scheduling conflict with a class that he needs to graduate. Helton clarified McQuay’s situation on Saturday, noting that he will only miss the Tuesday workouts with the team.

“We have that walkthrough at 7 a.m. – he’s going to get his practice right after that walkthrough because he doesn’t have morning class,” Helton said of McQuay’s Tuesday schedule. “That senior class that he has to take is in the afternoon, so the Tuesday afternoon practices he won’t be there, but he’ll get his own individual work away from the team in the morning.”

Pendergast focusing on inside linebackers and secondary

During his prior stint as USC defensive coordinator in 2013, Clancy Pendergast spent the vast majority of each practice with the secondary, particularly during the early individual drills. This time around, however, he’s been spotted spending the bulk of his time with the inside linebackers.

Helton talked specifically about Pendergast’s role, which still includes spending some time with the secondary, as well as that of the other defensive assistants following practice.

“Ronnie [Bradford] and Clancy are handling the secondary and the interior ‘backers, and Johnny [Nansen] helps out, but Johnny is really focusing on those edge players – especially with Uchenna and Porter being young guys,” Helton said. “And then KU [Kenechi Udeze] is concentrating on the big three inside – that nose, that three and that five technique. You look at the expertise that Clancy has, his linebacker [NaVorro Bowman] led the world in tackles last year at San Francisco, so the knowledge that he has both in the back end and at linebacker really suits us.”

– Among those who did not participate in practice on Saturday were Chris Hawkins (ankle surgery), Osa Masina (hamstring) and Cameron Smith (knee). Toa Lobendahn (knee) and Khalil Rodgers (shoulder) are also essentially out, but they have been snapping to the quarterbacks in some non-contact drills.

– Helton went into depth about Rodgers’ injury, noting that the offseason shoulder surgery that he underwent usually requires six months of recovery time. As such, Rodgers will miss the entire spring, but he will be back in time for fall camp.

– The No. 1 offense to open the first 11-on-11 period had Max Browne at QB, Justin Davis at TB, Taylor McNamara at TE, Daniel Imatorbhebhe at TE/H-back, JuJu Smith-Schuster at WR, Darreus Rogers at WR, Chad Wheeler at LT, Damien Mama at LG, Nico Falah at C, Viane Talamaivao at RG and Zach Banner at RT.

– The primary base No. 1 defense had Nwosu at ‘sam’ OLB, Porter Gustin at Predator OLB, Rasheem Green at DE, Noah Jefferson at N, Kenny Bigelow at DE, Michael Hutchings at ILB, Quinton Powell at ILB, Iman Marshall at CB, Langley at CB, McQuay at S and Marvell Tell at S.

– Powell’s move into the starting lineup at ILB was a new development on Saturday.

– The defense also spent a good portion of practice in a nickel formation, which saw Plattenburg come into the lineup, and Jefferson come out.

– Practice opened with a board drill that featured some physical one-on-one matchups, particularly between the offensive line and defensive line.

– During an early WR/DB one-on-one drill, early-entrant freshman Michael Pittman showed off his physicality, stiff-arming Deion Hart to the ground.

– During another one-on-one period Darnold went deep to Isaac Whitney, but Jonathan Lockett made a nice pass break-up. A little later De’Quan Hampton made a great leaping catch near the sideline with Marshall in tight coverage.

– There was plenty of time spent on special teams for the second consecutive day, with an emphasis on punt blocking, rushing the punter, and field goals. During the field goal period Matt Boermeester connected on 5 of 8 attempts. He made attempts from 20, 25, 27, 31 and 41 yards out. He missed attempts from 34, 38 and 44 yards out.

– Wyatt Schmidt and Sam Darnold were the primary holders used during the field goal period.

– The team will now get a week off for spring break before practicing again on March 22.

– J. Davis was swarmed at the line by Green and a host of others for no gain.

– Jones broke a run outside and picked up close to 25 yards before Hutchings stopped him.

– Browne hit Steven Mitchell over the middle for again of 8 or 9 yards.

– Browne hit Hampton over the middle for a gain of 9 or 10 yards before McQuay made the stop.

– Darnold hit Dominic Davis outside for a gain of 10 yards.

– J. Davis ran up the middle for a gain of 5 or 6 yards before Tell made the stop.

– Browne threw a quick pass outside to Deontay Burnett, but Plattenburg limited the play to a short gain.

– Jones ran for a gain of 6 or 7 yards before Olajuwon Tucker made the stop.

– Browne hit Smith-Schuster over the middle for a gain of 10 yards before Powell made the stop.

– Browne hit Smith-Schuster in the corner of the end zone for a diving 35-yard TD with Marshall in coverage.

– Greene hit Ajene Harris over the middle for a gain of over 15 yards before Matt Lopes made the stop.

– Browne threw outside to Rogers, but Langley tipped the ball in the air, and McQuay grabbed the interception and took it back for 6.

– Darnold connected with Burnett over the middle for a gain of 12 or 13 yards.

– Browne went over the middle to Smith-Schuster, but Hutchings tipped the ball this time and McQuay got another pick-six.

– Browne hit Smith-Schuster for a 35-yard TD strike to end the day.