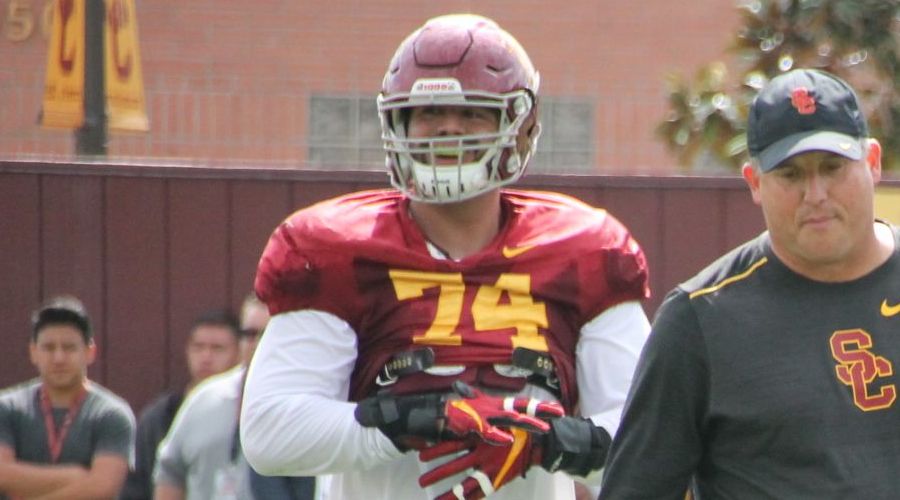 With the team heading over to the annual Swim with Mike event following practice, the Trojans took part in an abbreviated full-pads scrimmage on Saturday on Brian Kennedy-Howard Jones Field.

While the defense has dominated much of the last month of workouts, USC head coach Clay Helton noted that it was the offense that stood out during Saturday’s session.

“It was a really, really good scrimmage,” Helton said. “By far, operationally for the offense, one of their better practices this spring.”

Helton specifically pointed to tailbacks Vavae Malepeai and Dominic Davis as two of the stars of the day, as well as wide receivers Tyler Vaughns and Michael Pittman Jr. – both of whom have been on somewhat of a tear as of late.

The two young wide outs shined right from the get-go, with each making a highlight reel catch during an early ‘backed-up’ period where the offense was working from its own one-yard-line. First Vaughns made a nice catch along the sideline on a Sam Darnold throw for a gain of close to 20 yards, before Pittman made a beautiful reaching grab over Isaiah Langley for a 25-yard gain on a pass from Matt Fink.

The offense also benefitted from the play of Nico Falah. The returning starting center has been hampered by a back injury this spring, but he’s started to get more and more work in with the No. 1 unit during the 11-on-11 periods over the course of the last two practices.

“It really helped to have Nico back out getting some quality work today,” Helton said. “He got about 24 snaps I believe in the scrimmage, and I thought [he] operated really well.”

The performance of the offense was even more impressive when you factor in that Viane Talamaivao (bicep), Toa Lobendahn (knee), Nathan Smith (knee) and Andrew Vorhees (back) are all currently sidelined.

With only three offensive tackles available, Clayton Johnston took periodic reps with the No. 1 offense at both left and right tackle for the third consecutive day, spelling Chuma Edoga and Chris Brown.

Edoga, who took reps at his normal left tackle spot as well as on the right side, was sporting what looked like a cast on his right hand, but it did not appear to impact his performance. Helton noted that Edoga has been dealing with a wrist injury as of late, and he also injured his finger this past week – although X-Rays revealed no break.

– During the last half of practice the USC Trojan Marching Band, joined by the Song Girls, put on a performance off to the side of practice before heading over to the Swim with Mike event.

– Aca’Cedric Ware returned to live action after having missed extensive time recently due to a foot injury. C.J. Pollard (ankle) was also full-go.

– The entire starting offensive line to begin the day had Edoga at LT, Roy Hemsley at LG, Falah at C, Jordan Austin at RG and Chris Brown at RT.

– During a field goal period Michael Brown connected on 6-of-7 attempts with a long of 46 yards. His lone miss was from 50 yards. He did miss his only attempt during the scrimmage – a 34 harder – however.

– Olajuwon Tucker and Ajene Harris came up with interceptions on Saturday.

– Defensive tackle Christian Rector had a solid day, dropping Fink for a safety during the ‘backed-up’ period, and also tackling Reuben Peters for a loss.

– Darnold hit Vaughns outside for a gain of 15 yards.

– Fink hit Pittman for a 25-yard gain over Langley.

– Christian Rector sacked Fink in the end zone for a safety.

– Fink found Josh Imatorbhebhe over the middle, but Jalen Jones popped the ball loose for an incomplete.

– Ware ran up the middle for a gain of around 10 yards.

– Ware ran for a gain of around 7 yards before Jack Jones put a pop on him.

– Darnold hit Velus Jones for a gain of close to 10 yards.

– Darnold hit Tyler Petite outside for a gain of 7 or 8 yards.

– Rector stopped Peters for a loss.

– Jack Sears hit J. Imatorbhebhe along the sideline for a gain of close to 30 yards.

– Malepeai ran outside for a gain of around 5 yards before Cameron Smith made the stop.

– Uchenna Nwosu dropped a sure interception on a pass thrown by Darnold.

– Fink tried to hit J. Imatorbhebhe outside but J. Jones broke up the pass.

– Fink went deep to Pittman, but Quansah is flagged for pass interference and the ball falls incomplete.

– Moore stopped Peters for a loss.

– Darnold hit Greene for a gain of 10 yards.

– Darnold went deep to Greene, pass was incomplete but J. Jones was called for pass interference.

– Darnold hit Vaughns outside for a gain of around 15 yards.

– Sears scrambled outside for a gain of close to 20 yards.

– Sears hit Pittman for a gain of 30 yards over Quansah.

– D. Davis ran outside for a gain of 9 or 10 yards before Tell made the stop.

– Iosefa stopped Peters for no gain.

– Fink hit Pittman, who attempted to hurdle Quansah but was tripped up.

– Fink tried to hit Cary Angeline outside but Olajuwon Tucker intercepts the pass.

– Darnold tried to hit Velus Jones over the middle, but Jones is hit hard by Hawkins, and Ajene Harris makes the interception.

– Darnold hit Petite for a big gain over the middle before Hawkins made the stop.

– Darnold hit V. Jones over the middle for a gain of ariound 15 yards.

– Darnold hit Greene for a 9-yard-TD.