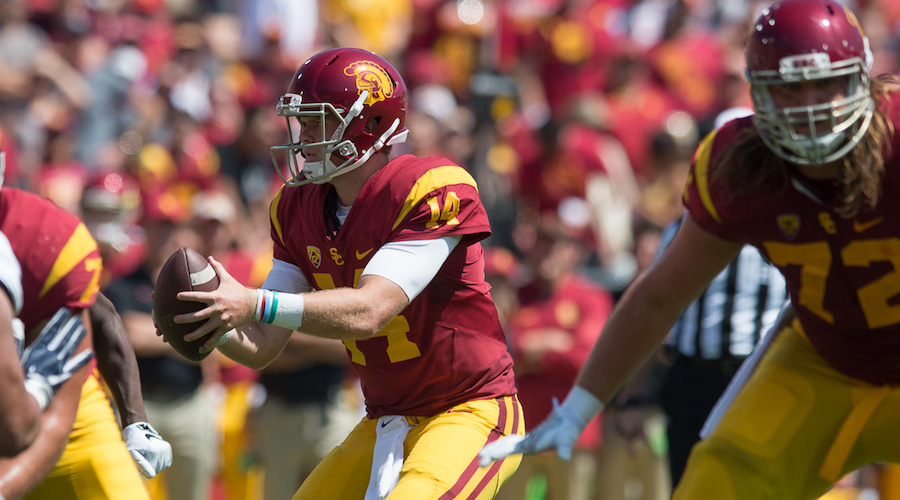 USC has a big clash with Pac-12 foe Utah coming up on Friday night, but that certainly wasn’t the big topic of conversation both during, and immediately after the Trojans’ practice session on Monday.

With USC off to a disappointing 1-2 start this season, quarterback Sam Darnold came out and led the No. 1 offense in place of Max Browne throughout the day for the first time this fall, and following the two-hour session, Trojans head coach Clay Helton confirmed to the media in attendance that the redshirt-freshman is the team’s new starting signal-caller.

Upon making his announcement, Helton was quick to point out that Browne, who has completed 63.2 percent of his passes this season, is not to blame for the team’s lackluster performance so far. But with the Trojans offense struggling, particularly in the two losses, Helton said that he decided that a change had to be made.

And in Darnold, who has completed 14-of-22 passes for 136 yards and two touchdowns with one interception in brief action, he believes he might have someone who can potentially help turn things around.

“[Browne] is not the scapegoat here – with the way he performed, it was more than honorable,” Helton said. “But the realism with football is that when you’re 1-2, and you’ve scored one touchdown against Alabama and Stanford, I wanted to see a spark in our offense, and I hope that Sam can bring that. I’m confident in it after watching three games, seeing him in the arena, and seeing what he can do, I’m very appreciative.”

Helton informed both players of his decision on Sunday night. Darnold, who wound up on the losing end of a highly publicized competition with Browne in fall camp, said that he was thrilled when Helton told him that he was the Trojans’ new starting quarterback.

“I was stoked to hear the news – stoked to finally get the opportunity,” Darnold said. “Max competed his butt off, but in the end coach made his decision, and we’re going to prepare for Friday just like we have been.”

At the same time, the San Clemente product admitted that his ascension to the starting role is somewhat bittersweet in that it comes at the expense of Browne, one of his closest friends on the team.

As for Browne, who completed 18-of-28 passes for 191 yards in USC’s 27-10 loss to Stanford this past Saturday, he admitted that the decision caught him off-guard.

“You kind of know, when you’re not winning ballgames it’s not easy on anyone,” Browne said. “But after I had watched the film, I was better than I thought, so it surprised me for sure. I’d be lying if I said otherwise.”

Browne, who is enrolled in graduate classes and is eligible to transfer to another school following the season to play immediately, said that his potential long-term future has already begun to weigh on his mind.

“Yeah, you think about it right away,” Browne said. “You think about all of the possibilities at hand. But at the end of the day it’s only Week 4. There’s a lot of ball to play, and so I’ll stay ready.”

– Also on Monday, Marvell Tell and Leon McQuay were the two primary safeties with the No. 1 defense, with Jonathan Lockett coming in on nickel situations to cover the slot. Chris Hawkins, who started the first three games at safety, took some limited reps with the No. 1 defense, but the other three players definitely saw significantly more time than he did.

– With the Trojans’ matchup with Utah coming up on Friday, Monday’s practice format mirrored what a typical Tuesday practice looks like.

– Helton said that the team expects Rice Eccles Stadium to feature a hostile atmosphere on Friday night. To prepare for that, loud crowd noise was piped onto Brian Kennedy-Howard Jones Field during some of the 11-on-11 team and service team periods.

– With rain expected to hit during the game on Friday, Helton also noted that the skill players, centers and special teams performers practiced with wet balls at times on Monday.

– Among those who did not participate in practice were Matt Fink (ankle) and Noah Jefferson (shoulder). Jamel Cook (foot) worked on the side with a trainer early, but then took the rest of the day off.

– John Plattenburg, who cleared concussion protocol late last week, was a full participant. He lined up with the No. 2 defense at safety during some of 11-on-11 and 7-on-7 periods.

– The No. 1 offensive line throughout the day consisted of Chad Wheeler at LT, Damien Mama at LG, Nico Falah at C, Viane Talamaivao at RG and Zach Banner at RT.

– During an early one-on-one period Michael Pittman came up with a great leaping catch on a deep throw down the sideline with Ajene Harris in tight coverage. Iman Marshall also made a nice pass break-up on a deep throw to JuJu Smith-Schuster during the same period.

– Smith-Schuster later came up with the arguable catch of the day during a service team period, jumping over Jack Jones deep over the middle of the field to pull down a pass from Darnold for a gain of over 40 yards.

– During the same service team period, Darnold would connect on another deep ball over the middle to Smith-Schuster, as well as with De’Quan Hampton. Darnold also connected deep with Jalen Greene for a 40-yard TD during the final 11-on-11 period of the day.

– J. Davis ran up the middle for a gain of around 5 yards.

– Aca’Cedric Ware followed a block by Wheeler and broke loose for a 30-yard TD.

– Ronald Jones II ran outside for a gain of 7 or 8 yards.

– Darnold hit J. Davis outside for a gain of close to 10 yards.

– Ware followed Talamaivao for a gain of close to 10 yards.

– Browne hit Josh Imatorbhebhe in the corner of the end zone for a 35-yard TD.

– Browne hit James Toland outside for a big gain.

– Darnold hit Darreus Rogers outside for a 10-yard gain.

– Browne tried to hit Tyler Vaughns in the corner of the end zone, but Marshall broke up the pass.

– Browne hit Vaughns over the middle for a gain of over 10 yards.

– Jabari Ruffin and others stopped Toland for no gain.

– J. Davis had a nice run up the middle for a gain of around 15 yards before Ykili Ross made the stop.

– Browne tried to hit Trevon Sidney with a deep pass over the middle, but it was