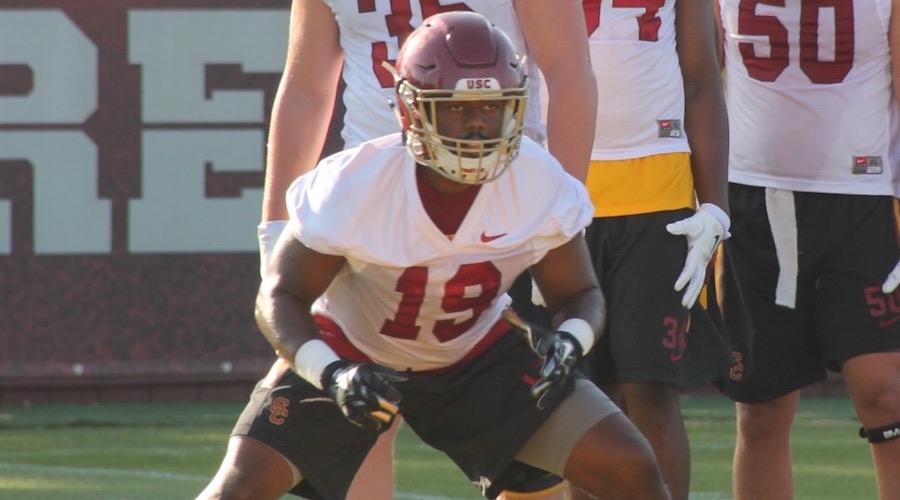 The Trojans were back at work on Monday, and to no surprise, Helton said that the big focus of the day, defensively, was gearing up for Cal quarterback Davis Webb, and specifically, his ability as a long ball passer.

“He’s by far one of the more accurate deep ball quarterbacks that we’ve seen,” Helton said. “He throws a great ball, gives his kids the opportunity to make plays, and when you look at [Chad] Hansen going up, and [Melquise] Stovall going up, they’re making plays down the field. Our D.B.s are going to have to do a great job of playing the football because there aren’t going to be many overthrows or missed throws with this guy.”

The Trojans defense also spent a significant portion of practice working on third-down situations. The Golden Bears ran a FBS-record 118 offensive plays during last weekend’s 52-49 double overtime victory over Oregon, thanks in part to their ability to convert on third-down.

“This is a group as you watched them in Oregon that had a 15-play drive, a 14-play drive, and a 13-play drive in that first half,” Helton said. “Oregon just couldn’t seem to get off the field on third down, and all of a sudden the play numbers added up. The biggest thing for us with any good quarterback is trying to get him off his spot, whether it’s a three-man rush, four-man rush, pressure situations, we’ve got to be able to move this quarterback and get him off his spot. We worked a great deal on that.”

Offensively, meanwhile, a major point of emphasis for the Trojans was their own third-down efficiency.

“When you’re playing a team that puts a lot of plays up each game, you have to sustain your own drives,” Helton said. “You have to be ball control, and you have to make third down, so we worked our third-down package a lot today.”

– The team practiced in shorts, shoulder pads and helmets on Monday. The workout mirrored what the team goes through on a Wednesday during a typical game week.

– Tailback Justin Davis (high ankle sprain) was in attendance but, once again, he did not participate in practice, and Helton said that it’s looking less and less likely that he will be available to play against Cal.

– Clayton Johnston also did not practice. He was wearing a boot on his foot.

– Wide receiver JuJu Smith-Schuster (back) took part in the entire practice session for the second consecutive day, again showing no sign of injury. In a sign reflecting that, the talented junior made a nice one-handed grab on a deep pass over the middle during a service team period. He also hauled in a 35-yard touchdown pass during the final team period of the day.

– Leon McQuay III (hip/groin) and Ajene Harris (knee) took part in a majority of practice, and Helton said that he expects both players to play against Cal.

– With Jabari Ruffin suspended from all team activities due to a student-conduct issue, Olajuwon Tucker ran with the No. 2 defense at the SAM outside linebacker position throughout practice for the second consecutive day.

– During an early service team period Michael Hutchings made the defensive play of the day, coming up with a pick-six on a pass over the middle from Matt Fink. Iman Marshall and McQuay also intercepted passes during practice.

– Adoree’ Jackson made the arguable offensive play of the day, making a leaping 35-yard touchdown catch over C.J. Pollard.

– Quarterback Sam Darnold continued to show solid chemistry with the tight ends, connecting with Daniel Imatorbhebhe for a long touchdown over the middle during one period.

– De’Quan Hampton made a fantastic grab at one point, leaping up high over Harris to pull down a deep pass from Darnold.

– Jonathan Lockett was slow to get up after colliding with Velus Jones, who was running a route over the middle of the field. After taking a few plays off, Lockett did return.

– Former Trojans players John Mazur and Darrell Rideaux were among those in attendance.

– Darnold hit Smith-Schuster outside for a gain of close to 10 yards.

– Darnold hit Smith- Schuster outside for a 35-yard touchdown.

– Ronald Jones II ran up the middle for a gain of around 5 yards.

– Max Browne went deep to Trevon Sidney, but McQuay was there to pick it off.

– Browne hit Sidney over the middle for a 10-yard gain.

– Browne hit Josh Imatorbhebhe over the middle for a gain of around 20 yards.

– Darnold hit D. Imatorbhebhe for a gain of around 25 yards.

– Darnold hit Dominic Davis outside for a 10-yard gain.

– Hampton jumped up high to pull a deep pass from Darnold in over Harris.

– Browne hit Tyler Vaughns outside for a gain of close to 10 yards.

– Browne hit Velus Jones outside for a gain of 7 or 8 yards.