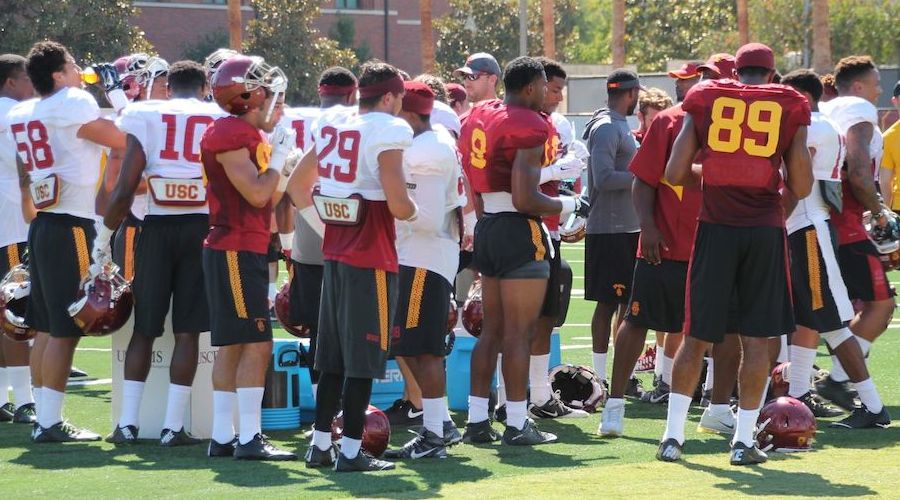 With temperatures in the 90s, the Trojans took part in a shorts, shoulder pads and helmets practice on Saturday that featured lengthier water breaks to combat the heat, as well as a post-workout visit from a snow cone truck. Despite the conditions, however, the two-and-a-half hour session certainly wasn’t lacking in intensity or standout performances.

And that was especially the case for two-way star Adoree’ Jackson, who had another outstanding day at cornerback.

“It felt good to me,” Jackson, originally from Illinois, said of the heat. “I mean, a lot of people were complaining, but me, Leon [McQuay III] and the guys from Florida know that this isn’t that hot. We’ve practiced in 115 degrees with humidity, so this is a good day for us.”

The athletic sophomore showed off his speed and cover ability on one play, in particular, where he stayed stride-for-stride with JuJu Smith-Schuster on a deep pass downfield, blanketing the big wideout before breaking up the pass at the last second.

Able to specialize on defense right now, Jackson is working hard to take his game to the next level.

“For me, it’s just about being a smarter player and a technician,” Jackson said. “It’s about making those plays that were just good last year, and turning them into great plays.”

Jackson has also taken on the role of a mentor to some of the freshmen defensive backs on the team. One of those new additions, Iman Marshall, also had a strong showing at cornerback on Saturday, breaking up passes on two consecutive plays in a late 11-on-11 period.

“He’s a great player,” Jackson said of Marshall. “He’s a physical guy, and he’s just out there willing to learn. He wants to get better.”

One noticeable difference on the defensive side of the ball between the current fall camp workouts and last season are the sheer number of players being rotated in and out of the lineup. That includes a whole host of freshmen like Marshall who are starting to make their presence felt.

“We want to have as many able bodies that we can to help us win the game, and not have to play 104 snaps,” USC defensive coordinator Justin Wilcox said following practice. “We’re getting guys a lot more reps. There’s a lot more people on the defense, which is awesome, and young guys are getting valuable reps.”

Wilcox also cited the influence of the veteran leaders on the team for the role that they’ve played in guiding the younger players along.

“There’s guys who have been here a long time – Antwaun Woods and Anthony Sarao – those guys,” Wilcox said. “The way they come to meetings, the way they prepare, how they handle themselves in individual drills, in the team setting, that’s leadership. Whether they’re vocal or not, they’re an example for the rest of the defense and the players on our team, and I’m glad we have those guys.”

Senior cornerback Kevon Seymour went down during an early one-on-one period with a left knee injury and did not return to action, spending the remainder of the session on a trainers’ table with ice on his knee.

Following practice it was announced that Seymour had banged his knee, but that the injury was not serious.

Taking Seymour’s spot with the No. 1 defense at the cornerback position opposite Jackson during practice was sophomore Jonathan Lockett.

– Safety John Plattenburg, who had been sidelined with a hip pointer, returned to full action on Saturday, spending a majority of the day with the No. 2 defense.

– Offensive lineman Viane Talamaivao (hamstring) took part in some early individual drills, but was held out of the rest of practice.

– Sarkisian had the day off from speaking to the media on Saturday.

– During the early one-on-one period, there were a number of standout matchups, with JuJu Smith-Schuster reaching up high to haul in a pass down the left sideline despite tight coverage by lockett, Steven Mitchell Jr. catching a pass in front of Chris Hawkins, and Lockett breaking up a pass intended for Isaac Whitney.

– There was no final five-play challenge on Saturday.

– Class of 2016 USC wide receiver-target Tyler Vaughns (La Puente, Calif./Bishop Amat) was among those in attendance.

– Also on hand were a number of former Trojans players including Chris Galippo, Drew McAllister and Emon Saee.

– Max Browne hit De’Quan Hampton outside for a gain of 15 yards.

– Cravens applied pressure and Browne through the ball away.

– Aca’Cedric Ware’s was limited to short gain by Anythony Sarao.

– Tre Madden picked up seven or eight yards before Delvon Simmons made the stop.

– Madden ran off Banner and broke loose for a 30-yard-plus gain.

– Kessler hit Mitchell outside for a gain of around 15 yards.

– Browne connected with Tyler Petite for a pickup of 12 yards before Matt Lopes made the stop.

– Jackson broke up the deep pass to Smith-Schuster.

– Cyrus Hobbi bobbles a Sam Darnold pass, which allows Lopes to come in and snag it away for an interception.

– Browne hit Jahleel Pinner outside for a gain of around 10 yards.

– Kessler hits Ware outside for a gain of 20-plus yards.

– Browne connects deep with George Katrib over Marshall for a gain of 30 yards.

– Darreus Rogers reached up high to snag down the Kessler pass for a 20-yard gain.

– Kessler hit Smith-Schuster over the middle for a 25-yard gain.

– Browne hit Petite outside for a pickup of around 25 yards.

– Kessler connected deep to Mitchell over McQuay and Isaiah Langley.

– Kessler hit Christian Tober outside, and Marshall did a nice job of fighting through the block to stop the play for a short gain.

– Browne’s pass was batted down at the line by Kenny Bigelow.

– Browne connected Taylor McNamara over the middle for a 15-yard gain.

– Lockett broke up the Browne pass to Hampton.

– Jalen Greene made a 35-yard juggling grab against Plattenburg on a pass thrown by Browne.

– Kessler hit Smith-Schuster on two consecutive plays along the sideline against Langley.

– Ware weaves his way for a 15-yard gain before Plattenburg made the stop.

– Darnold tried to hit Whitney, but Marshall broke up the pass.

– Darnold went to Katrib, but Marshall broke it up again.

– D. Simmons and Co. stop Jones for no gain.