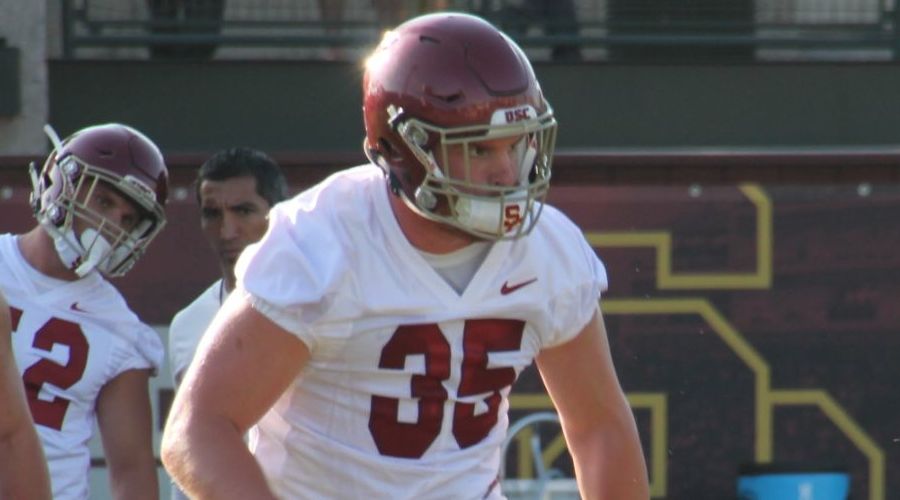 The Trojans opened up fall camp on Thursday, with the team in noticeably high spirits throughout the nearly three-hour practice – particularly USC head coach Clay Helton.

“I’m excited to be back,” said Helton following practice. “For a football coach this is kind of like Christmas, and for the last three days I’ve felt like an eight-year-old at the top of the stairs waiting to go down and open his presents.”

Dressed in shorts and helmets, it was a practice session light on contact, but heavy on drills, not to mention plenty of 7-on-7 and 11-on-11 work. With a roster containing what Helton said he figures to hold right around 82 scholarship players during the season, one thing that stood out right away was just how much deeper the team appeared in comparison to recent years past.

Contributing to the noticeable depth not only was the Trojans’ most recent signing haul, a key transfer in defensive tackle Stevie Tu’ikolovatu, as well as big-play star Adoree’ Jackson – back from track and field duties – but also center Toa Lobendahn and inside linebacker Cameron Smith, each of whom suffered season-ending knee injuries this past season. Both players took part in the entire first half of practice, which included all of the individual drills as well as a 7-on-7 period, before sitting out the final big 11-on-11 session.

“I really want to commend [Strength and Conditioning Coach] Ivan Lewis, [Head Athletic Trainer] Russ Romano, and Dr. John Meyer – what they did preparing this team through summer conditioning, and then Dr. Meyer and Russ really getting some guys healthy, as you saw today, that are really key for us – like a Cam Smith and a Toa,” Helton said. “To go through those surgeries and to get people back healthy for us, was key for us. I really want to thank them.”

As for the practice itself, it was marked by some standout play by Clancy Pendergast’s defensive unit.

“Today, you could tell a difference with our defense, where they were from spring until now,” Helton said. “You could tell they had 15 practices in the spring, and you could tell all the work in their PRPs that they had. They’re playing a lot faster, a lot cleaner.”

The offense stood out at times as well, producing highlight plays like a beautiful 30-yard touchdown run by Justin Davis, a deep touchdown pass from Sam Darnold to Darreus Rogers, and a leaping 30-yard touchdown catch from Jalen Greene on a pass from Max Browne. But there were also instances of sloppy play, including at least three fumbles.

“Overall, for the first practice, it was good,” Helton said. “We’re going to get even better as we go along. Thank goodness we’ve got 28 more of them before the first game.”

All eyes on the quarterback competition

Having battled throughout this past spring, the quarterback competition between redshirt-junior Max Browne and redshirt-freshman Sam Darnold picked back up on Day 1 of fall camp on Thursday. Both of the passers took reps with the No. 1 offense at times, although Browne did appear to take a higher number of snaps with the starting group, overall. Both quarterbacks performed solidly without throwing any interceptions.

“Today both of them played well,” Helton said. “I thought they made good decisions. You didn’t see interceptions out there, and there were some big plays down the field. I look forward to watching the tape over the next 18 practices and see how they both progress. But just like it was in the spring, both are playing at a very high level, and that’s what usually happens when you compete.”

Helton said that he expects the competition to wage on through the team’s Salute to Troy event on Aug. 19, at which time he hopes to pick the team’s starter, allowing the victor two weeks to prepare in their role for the Trojans’ Sept. 3 matchup with Alabama.

– In the initial 11-on-11 period on air, the first starting offensive group that came out consisted of:

– The first starting defensive group that came out consisted of:

– During the final 11-on-11 period, Nico Falah ran at center with the No. 1 group in place of Lobendahn.

– Cameron Smith also took some reps with the No. 1 group at MIKE linebacker during some early periods.

– When the No. 1 defense went to the nickel, Chris Hawkins came in at safety, with McQuay covering the slot as the nickelback.

– Damien Mama spent the entire day with the No. 2 group at LG.

– Tu’ikolovatu spent the day with the No. 2 group at nose tackle. He and Michael Brown – both blueshirts – were officially added to the roster.

– Having been held out of the player-run workouts this summer due to injury, both Oluwole Betiku and Jamel Cook suited up today. Betiku made it through the entire practice session, running with the No. 2 group at SAM linebacker. Cook took part in warm-ups but then went to the sideline for the remainder of the day.

– Noah Jefferson, who had back issues and suffered a shoulder injury this past spring, spent the day working and stretching with a trainer on the sideline.

– Freshman Keyshawn “Pie” Young, who worked at cornerback this summer during the player-run practices, went exclusively at wide receiver on Thursday.

– Browne hit JuJu Smith-Schuster over the middle for a gain of 8 or 9 yards.

– Browne went deep for Rogers, but Marshall had tight coverage and the pass fell incomplete.

– Darnold tried to Tyler Vaughns over the middle, but Harris made a nice pass break-up.

– Darnold went outside to Michael Pittman, who made a nice catch with Jonathan Lockett in coverage.

– Darnold went deep to Tyler Petite for a big gain. Olajuwon Tucker fell down in coverage on the play.

– Browne hit Mitchell outside for a gain of 11 or 12 yards before Powell made the stop.

– Browne hit Mitchell over the middle for a gain of around 10 yards.

– Darnold tried to hit De’Quan Hampton over the middle, but Harris broke the play up.

– Ronald Jones II ran through a hole on the right side and exploded outside for a big gain.

– Gustin and others sacked Browne.

– Darnold tried to hit Rogers outside, but Marshall had tight coverage.

– Darnold hit Rogers over the middle for a gain of over 10 yards.

– Darnold took off and ran, but fumbled, and Tucker recovered for the defense.

– Browne hit Mitchell over the middle for 8 or 9 yards.

– Browne hit Pittman outside for a gain of close to 15 yards.

– J. Davis came back and broke off a long run, making a great cutback move to get by Marshall for a 30-yard touchdown.

– Darnold couldn’t hold onto the shotgun snap from Cole Smith, and the defense recovered.

– Browne to Greene, who made a leaping 30-yard TD grab over Jack Jones.

– Don Hill and others stopped Aca’Cedric Ware for a loss.

– Darnold hit Smith-Schuster outside for a gain of close to 10 yards.

– Browne hit a wide-open J. Davis outside for a big gain.

– Vavae Malepeai ran outside for a big gain.