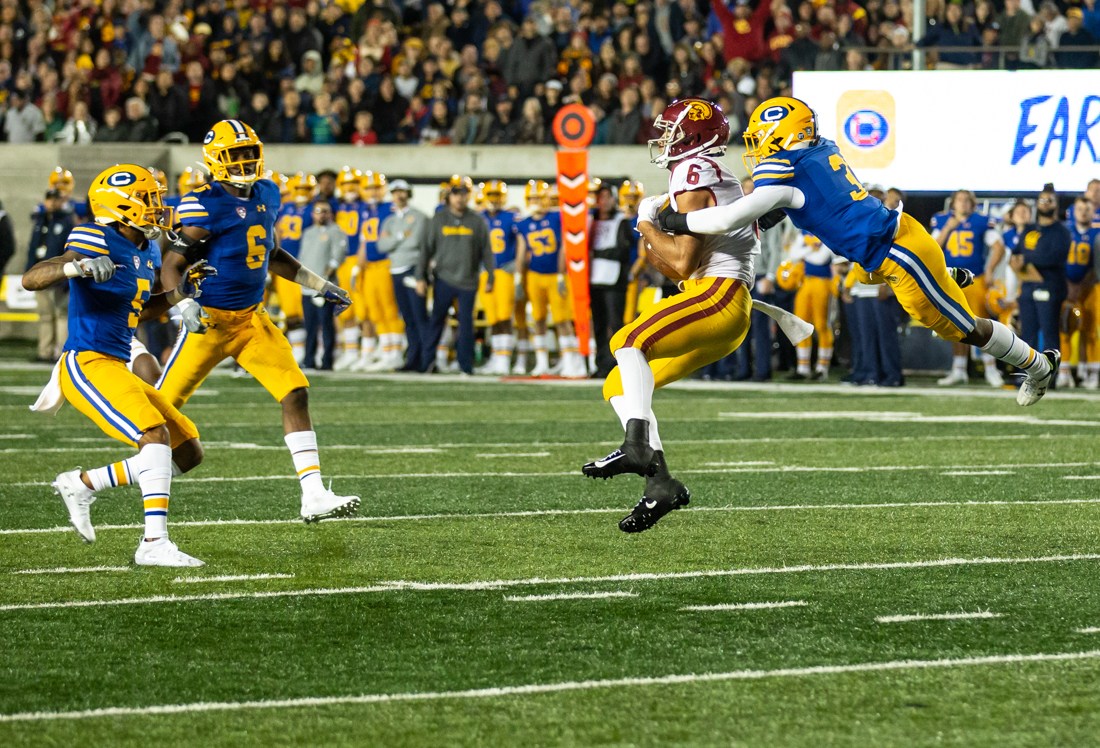 Clay Helton praised the Trojans’ offense, defense and special teams during his Sunday night media call following USC’s 41-17 win against Cal. He said USC is “starting to play some really good football down the stretch.”

Helton said the team “brought the right mindset, energy, focus and execution to the game plan to get a big Pac-12 victory on the road.”

Offensively, he was pleased with quarterback Kedon Slovis, who threw for 406 yards and four touchdowns against a Cal defense that had allowed just nine passing touchdowns all season. Helton said his favorite throw of Slovis’ was actually an incompletion, as the Trojans were down near the goal line and Slovis rolled to his left and threw the ball out of the back of the endzone when the play didn’t develop how he wanted it to. Two plays later, the Trojans scored on a Stephen Carr touchdown run.

Helton also had plenty of praise for the USC wide receivers, who “created an explosive offense.” True freshman Drake London recorded his first 100-yard game, and Michael Pittman finished with 11 catches for 180 yards and a touchdown. As for the running game not delivering many yards, Helton said he liked how the backs and offensive line produced in third-and-short situations, as well as down on the goal line. Ultimately, USC is going to give the wide receivers an opportunity when they have favorable matchups.

“One of the things I was surprised at was how much one-on-one situations we were getting,” Helton said. “We haven’t seen those coverages in a while, to be honest.”

Helton said the Trojans took an “ultra-aggressive” gameplan up to Cal, which called for shots downfield if available.

The “ultra-aggressive” gameplan extended to the defensive side of the ball as well, as defensive coordinator Clancy Pendergast dialed up an array of pressures and coverage schemes.

“By far I thought it was our most aggressive play, the fastest we have played as a defense,” Helton said. “I thought our kids showed up to the point of attack with violent intentions.”

Helton said the defensive coaches challenged the USC defensive backs before the game, saying they were going to run a lot of man coverage against the Cal receivers. He gave praise to Greg Johnson for his play against Cal, as Johnson made a solid tackle on third down to force a Cal punt, stayed close with a receiver to force an incompletion on another third down, and grabbed an interception that USC turned into seven points. Helton said they would continue to play some man going forward, but he likes how Pendergast is mixing coverages — showing thing pre-snap that change into something else post-snap — and confusing opposing quarterbacks.

As for special teams, Helton said that while he can be taken for granted at times, kicker Chase McGrath “continues to be a big-time playmaker.” Punter Ben Griffiths had another very good game, and Helton said the Australian punter has “become a force for us in flipping the field.”

Helton provided an injury report for several players who missed the game or were injured during it.

Linebacker Palaie Gaoteote did not make the trip as he continues to deal with knee and ankle injuries. Defensive back Chase Williams suffered a mid-foot sprain and had to leave the game. Kyle Ford did not play after suffereing a back strain. Wide receiver Velus Jones suffered a high ankle sprain and had to leave the game. Wide receiver Tyler Vaughns saw limited snaps, but is still dealing with an ankle injury. Running back Vavae Malepeai traveled but did not participate. Helton said he had a terrific practice on Tuesday, but that he was a little sore on Wednesday and Thursday and neither Malepeai nor Helton were totally convinced he could go on Saturday. Helton believes Malepeai has a chance to play against UCLA.

As for the targeting call against defensive end Christian Rector that resulted in his ejection from the game, Helton said that at full speed it looks like bang-bang play, but when you can slow it down and really look at it, he understood the call and could see the crown of the helmet leading the hit.

“By the rule, when you slow everything down, and you use the crown of the helmet, that is a rule in football,” Helton said. “I hated it for him, but it’s something that’s part of the game.”

Helton did praise Rector for his handling of the situation. Helton said his senior captain addressed and rallied his teammates.

Helton also addressed the 2019 recruiting class and the significant role it has played this season, from Slovis, to  London, Drake Jackson and Kenan Christon.

“I was really high on the class,” Helton said. “Some guys were highly rated, some guys not. But I’ve always believed in our evaluation process and taking guys we believe fit us, our culture, and are talented.”

Helton said the best days for these freshmen are ahead of them, as “they’re gaining confidence by the day.”

As a final note, this will be the final Sunday night media call of the season, as there will not be one following the UCLA game. USC’s team banquet was moved up to next Sunday. Helton said there were two reasons for the change, as this is the best way to get as many parents as possible to attend, as parents and family will be there for the UCLA game and won’t have to make another trip in mid-December. It also helps to have the banquet then so that it doesn’t interfere as much with recruiting, as having the banquet in December would take valuable time out of the recruiting calendar, with the early signing period fast approaching on December 18.