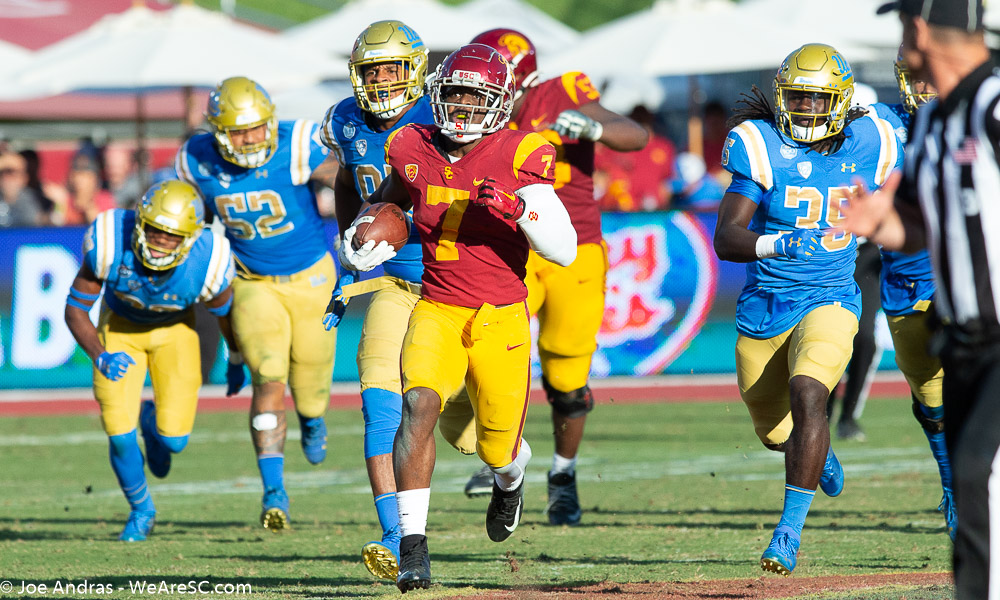 The Pac-12 became the first Power 5 conference to release its 2020 football schedule, as it announced a conference-only slate of 10 games for each team, set to begin on Sept. 26 and finish with a conference championship game on Dec. 18 or 19.

If you missed it yesterday, here is USC’s 2020 schedule:

The schedule has been pushed back from what had been a Sept. 5 start to now a Sept. 26 start. And there’s no guarantee it will start then. In fact, for USC, the season is more likely to begin on Oct. 3, with a home game against Cal.

The Pac-12 schedule is built in with the ability to push either or both of the first two games for every team back into the season, landing either on the bye week (all four teams involved in those first two games–your opponents and your opponent’s opponent–have the same bye week) or the open date on Dec. 12–the week between the final regular season game and the Pac-12 championship game.

Two rivalry games are scheduled for the first week of the season, with Arizona – Arizona State set to take place, as well as the USC – UCLA game.

While I really like the idea of a UCLA – USC game to open the schedule (in a season like this, I’m totally fine leaning into oddities), the built-in open dates allow the Trojans and Bruins to easily shift this back to become the season finale, and it appears as though that’s all but a finalized decision already.

The USC and UCLA athletic directors released a joint statement specifically mentioning the ability to move the game back and acknowledging that at this time, the schools do not have the necessary county and state clearances for the game to take place.

USC Athletic Director Mike Bohn went a step further later in the day, when he sent a letter to boosters and donors containing language that provided an even stronger suggestion that the game will move, saying, “It is likely that, based on current trends, we will take advantage of this strategic scheduling flexibility and our shared circumstances with UCLA to shift that rivalry contest to an open date later in the season.”

Fall camp may start on August 17, though Pac-12 commissioner Larry Scott admitted that there is a chance that not every conference school will be able to utilize their 25 practice sessions in the same way.

At this point, Cal, UCLA and USC are very limited in what they can do during their on-field conditioning work. And if the health and safety requirements aren’t altered by local or state officials before that August 17 date, those schools will be unable to put together anything resembling a full football practice.

USC wouldn’t need to begin camp on August 17 in order to get their full practice allotment in by the season-opener on Sept. 26. And moving that game back to later in the season would obviously give USC another week to delay the start (and moving the Cal game also would give them two additional weeks).

USC’s return-to-campus for its student-athletes has been handled very well, as the Trojans have just eight positive test results out of 549 total tests administered. It will obviously be interesting to see what those numbers look like as more students return to campus and the surrounding area, but the hope is that student-athletes will be able to isolate themselves enough to act as a bubble for the athletic programs–a method that has seen very positive results in several professional sports. Clearly, there will be difficulties here, as a report this week covered a coronavirus outbreak along USC’s fraternity row, where more than 40 people were infected.

Fans in the stands

Larry Scott was very clear in stating the Pac-12 will not have a say in allowing or not allowing fans in the stands this season. The conference will leave that decision up to the schools, who will follow the lead of local and state health authorities.

At this point, USC has received no word as to whether fans will be allowed in the Coliseum, but it’s pretty clear at this point that a very limited number of fans–maybe 15,000–is the most that will be allowed this season. Both the Chargers and Rams–going through same measures USC is, are set for limited-to-no capacity scenarios this season.

What will be interesting to watch is how other states and cities handle fans in the stands. USC has two major road games out of the state this year, and both now come late in the season, at Oregon and Utah. Those are two places where homefield advantage is largely derived from crowd noise and enthusiasm. Not having fans in the stands would level the playing field in a big way, while those states allowing 50% or more capacity could be a stark contrast to what the atmosphere at the Coliseum could be this season.

But that might just be another discrepancy that everybody in the Pac-12 just has to live with this season.

As it’s constructed at this time, USC has a schedule that clearly comes in two parts. While Stanford should be improved, starting the year 6-0 against UCLA, Cal, Stanford, Colorado, Arizona and Washington State should absolutely be attainable for USC, regardless of the circumstances heading into the season.

What will make or break USC’s 2020 season are those final four games, with road trips to Oregon and Utah between home games against Arizona State and Washington. Those are easily the toughest four games on the USC schedule and all come with no break at the end of the year.

The schedule could (and will) shift a bit if the UCLA game is pushed back, but it won’t break up the back-to-back-to-back-to-back against the four toughest teams (on paper) on the USC schedule. USC was able to generate some late-season momentum last year with wins against Arizona State, Cal and UCLA. Finding that same late-season winning streak will be far more challenging this season.

The honest answer is that nobody really knows.

Stanford head coach David Shaw was on the media availability webinar for the schedule release and he said of the future, “We’ll do what we’re allowed to do until we can do something more.”

That about sums it up for the Pac-12 teams, and especially the California teams (though Shaw’s Stanford is allowed to do more than the other three in-state programs at this point).

Right now, the conference has no set policy on how to handle a team that experiences positive tests, according to Oregon State associate athletic director for sports medicine, Doug Aukerman.

“We as a medical advisory group are trying to come up with some very specific criteria,” Aukerman said. “You can’t just say it’s a certain number of players because if you get a couple infections and they’re occurring within a day or two before the game, maybe you don’t really have control of the transmission of the virus in that instance and you need to take a pause.”

The Pac-12 Championship Game will take place on a campus this year, rather than at the Raiders stadium in Las Vegas.