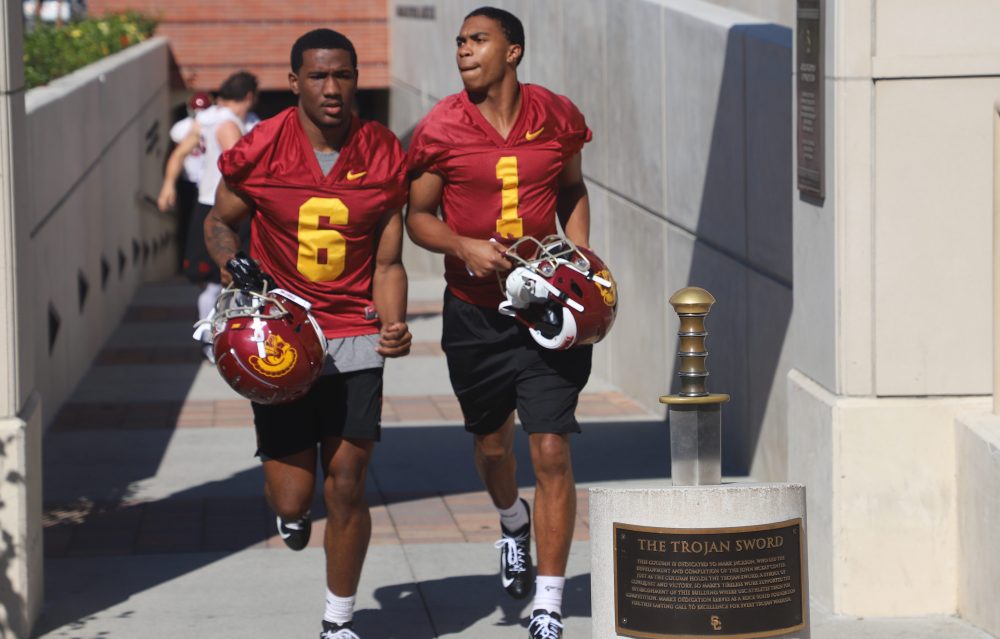 USC posted its spring roster and prospectus on Friday and there are a few interesting tidbits to gather, including position switches, new numbers and players not returning.

A few players will be lining up at new positions this spring, as USC looks to fill holes and provide depth at a few defensive positions.

Perhaps the most interesting is wide receiver Joshua Jackson Jr. flipping over to cornerback. USC lost Olaijah Griffin early to the NFL Draft and brings back Chris Steele, Isaac Taylor-Stuart and several younger options, but it was clear that none of those players truly pushed the returners for playing time last season. Jackson looked like he’d be able to contribute at wide receiver eventually, but hopefully this move happening early in his career allows him to settle in at the spot and compete for playing time. With last season being a half-year and not counting against eligibility, this year could serve as something of a second redshirt year for anyone who didn’t see time last year as part of that 2020 recruiting class.

USC has just six cornerbacks listed right now, so it’s likely Jackson will see plenty of reps this spring. That group will grow in the fall, when Prophet Brown and Ceyair Wright are added.

Two safeties are moving down into the box, as walk-on Micah Croom and redshirt sophomore Kaulana Makaula are now listed at inside linebacker. Inside linebacker was a position that USC struggled to produce bodies at last season, as some pre-season and in-season injuries allowed for very little depth and even brought safety Talanoa Hufanga into the position for the game against Washington State.

Incoming freshmen and transfers have been assigned numbers and USC fans might need to quickly adjust, as several 2021 signees could contribute quickly this season.

Inside linebacker Julien Simon – No. 24

Running back Brandon Campbell – No. 25

Running back Keaontay Ingram – No. 28

Returning to the team

Offensive tackles Frank Martin II and Bernard Schirmer are both listed on the roster, as both elected to opt out of the 2020 season. USC clearly has a hole to fill at left tackle and the Trojans need to establish some depth all along the line, so getting as many bodies in the mix up front is a positive thing.

In addition to the players who have declared for the NFL Draft, the Trojans will be without quarterback Matt Fink and defensive lineman Trevor Trout this upcoming season.

Inside linebacker will be an interesting spot to watch this spring, as there are three players who did not see time last season who could play major roles in 2021 — though it’s a good idea to see them on the field first before projecting any kind of impact.

Both Solomon Tuliaupupu and Jordan Iosefa missed the 2020 season due to knee injuries and both have injury notations on their bios, saying they could be limited this spring due to continued recovery. Fellow inside linebacker Tayler Katoa did not play last season after returning to USC from a mission and suffering an injury as well. He does not have an injury notation this spring. Returning inside linebacker Kana’i Mauga and Ralen Goforth will likely be the first two up at those spots, but the additional bodies will likely be a welcome sight, and that includes early enrollee Julien Simon.

USC will also start the spring without defensive tackle Ishmael Sopsher, who underwent surgery for compartment syndrome recently. USC head coach Clay Helton held out hope that Sopsher could return by the end of spring, but that’s not a guarantee.

USC also could need to make do without defensive end Nick Figueroa for all or part of spring ball, as he underwent shoulder surgery following the 2020 season.

At tight end, Jude Wolfe’s recovery from a 2020 foot injury could linger into spring ball. The same could be true for Kyle Ford, who missed the 2020 season due to a torn ACL.

Hopefully the opposite is true for tight end Ethan Rae, who has been slowed by injuries in each of his first two seasons, but should be healthy enough to participate this spring. He’s been out of sight, out of mind as he’s dealt with knee injuries, but Rae is a real talent at tight end.