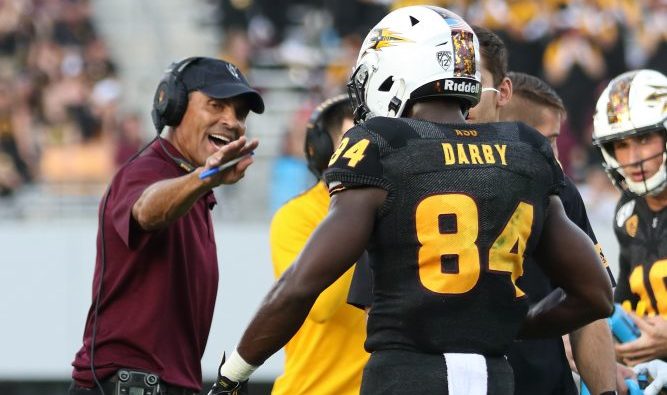 USC is going to bring a new defensive system into its opening game against Arizona State this weekend, but the Sun Devils are going to counter with new looks on both sides of the ball.

No coordinators in the conference bring as much name-brand recognition as the duo of Lewis and Pierce, but few bring with them as many question marks for opposing offenses. Where Edwards and Hill can watch tape of Texas from the last several years to get an idea of what the USC defense might look like under new coordinator Todd Orlando, there is likely no film available for USC offensive coordinator Graham Harrell to study in order to get an idea of what Lewis will bring as a play-caller.

“It makes it difficult,” Harrell said of preparing for the matchup with the Arizona State defense. “Its not like you can go find tape from the last year or two and see him calling it and know exactly what you’re going to get. We really don’t know what we’re going to get.”

But Harrell said that is less of a concern for this USC offense than it might be for others.

“We don’t necessarily try to out-scheme people,” Harrell said. “We’re going to try to go execute what we do at a really high level.”

USC has the benefit of rolling out a very experienced offense, led by second-year starting quarterback Kedon Slovis, three wide receivers who played extensively last season, an offensive line returning four players with at least a year of starting experience and a stable of four tailbacks with as much experience as any group in the conference.

“The nice thing is we’re in our second year in the system and so our guys know it a little bit better, and so if you get to the game and you have to adjust a little bit, that’s not going to be near as hard for our guys this year as it would have been last year, especially Week 1,” Harrell said. “They’ve played in it for a year; they’ve got a ton of practice in it, and so if we have to make some adjustments on the fly, I think we have a group that has a lot of experience that will be able to do that…Preparing for a team that you’re not sure what they’re going to do makes it difficult, but you just have to go do what you’re good at and adjust if need be.”

USC head coach said that when it comes to the Trojans’ offense against the Sun Devils’ defense, they’re looking at personnel matchups more than the scheme.

“It’s hard to be able to say they’re going to do this, this and this,” Helton said of the defensive gameplan from Lewis and Pierce. “It’s more about the personnel matchups that we’re evaluating and doing the things we feel good about, that are us.”

On the other side, Helton said the Trojans will be able to watch some film of the Boise State offense last season to get a feel for Hill as a play-caller. But that won’t be the extent of the preparation that goes into this game, or the totality of what they expect from Hill. Helton said Arizona State quarterback Jayden Daniels was extremely impressive as a true freshman last season, and his ability as a passer, runner and in terms of not turning the ball over, will allow Hill to do some extra things with his offense.

Hill will have Daniels to work with under center, but Arizona State will need to find a couple new playmakers to help him. The Sun Devils lost wide receiver Brandon Aiyuk, who led the team by a large margin with 65 receptions for 1,192 yards, and running back Eno Benjamin, who rushed for 1,083 yards and 10 touchdowns last season.

Frank Darby is likely to step in as the No. 1 receiver — he averaged more than 19 yards per reception last season and caught three passes for 86 yards and two touchdowns against USC in 2019.

Last season, no Arizona State player outside of Benjamin and Daniels rushed for more than 50 yards or a touchdown. But the Sun Devils have added some talent there, and USC is likely to see a rotation of three newcomers in four-star true freshman Daniyel Ngata, four-star juco signee DeaMonte Traynum and three-star juco back Rachaad White.

“It’s going to be a little bit different for us just because of the new coordinator that are in play,” Helton said. “You’ve got some unscouted looks that are going to be out there. We’ve talked to our football team about, it’s about us executing our systems. It’s about us playing with relentless effort and it’s about us not making the critical errors that we’ve seen in early ballgames that have cost teams wins with penalties and unforced turnovers.”