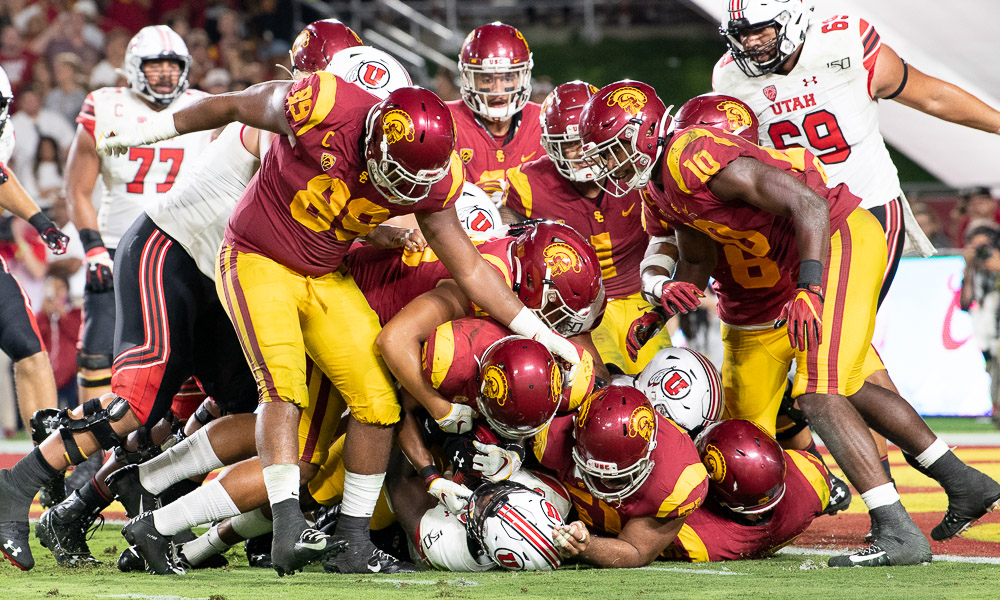 USC football may be at the center of a cultural divide, as changes in medical technology and our understanding of the human brain have made inevitable changes in the game, and maybe ultimately the eradication of the game itself.

We’re not all happy about this.  If you listen to unhappy USC fans, you’ll hear a lot of complaining about the program being soft and, especially, practices being soft and insufficiently physical.  There is, of course, a concern that without tougher more physical practices, which craft a tougher and more physical team, that USC cannot play at an elite level.  This is a purely utilitarian concern; if we’re not tougher, we can’t play with Alabama, Clemson, Notre Dame, and others.

But I wonder too whether there is also some concern about whether USC should try to win with finesse, even if it were possible to do so.

George Will once quipped that “football combines two of the worst things in American life.  It is violence punctuated by committee meetings.”  With the ascendancy of the no-huddle offense, football has largely lost its committee meetings.  It retains the violence.  And, now, at all levels, it is stumbling around trying to figure out what to do about that.

This isn’t the first time.  As I’ve written about before in Musings, football was once before at a crossroads, at risk of possible extermination, and had to re-invent itself.  Then it was not long-term damage from CTE but the immediate and all-too-frequent violent deaths that took place on the gridiron throughout college football, which saw dozens of deaths in a relatively short period at the turn of the last century.  Teddy Roosevelt – a football fan, of course; how could he not be? – held a summit to save the sport.  Through these efforts the NCAA was born (gee, thanks, Teddy!) and rule changes were adopted that led to a safer sport, one much closer to the game we know and love.

This should provide hope that football can again be saved with rule changes to make the game safer without destroying the sport we love.

In many respects, basketball is a superior game.  Football is a game of short, exciting bursts followed by long periods of inactivity; basketball features the short bursts of activity — a fast break, a drive to the basket followed by a thunderous dunk — but ties them together in a beautiful, unending flow.  It is a game of spacing and marvelous athletes (at least at the elite levels), a game that sets the stage for astounding feats of athleticism.  We see outstanding feats of athleticism at the highest levels of football too, of course, but probably with less frequency.  (Doubt me?  Watch an NBA All-Star game.)

Violence is at the core of football, much as it is at the core of boxing or mixed martial arts.  Without violence, football isn’t football at all.  Flag football shares a name, it borrows the passing trees and terminology, but it lacks the soul of the original.  It is simply not the same game.  As uncomfortable as we may be with it, and we should be uncomfortable as the long-term, inherent dangers of the sport become better known, we also understand that it is the violence that we love.  It is the thrill of the big hit, the savage beauty of watching one team physically dominate another until the latter loses the will to fight, that makes football different, makes it great.

It is also what makes football such a remarkable teacher.  This, of course, was Teddy Roosevelt’s position.  Teddy saw football as a molder of men, the type of men you need to take San Juan Hill.  “The sports especially dear to a vigorous and manly nation are always those in which there is a certain slight element of risk. It is mere unmanly folly to try to do away with the sport because the risk exists.”  Teddy was right, in a way.  Yes, basketball and soccer teach teamwork just as effectively as football.  But does soccer also teach courage?  Does it also teach how to overcome pain and fear for your coach, your teammates, your friends?  Football combines the teamwork, the camaraderie of the world’s other beloved team sports, with the grit, fear, and brutality of combat sports.  Few if any sports teach as much and teach it as well, and this probably matters if you think our society is increasingly decadent and soft and could use a little toughening up.

At the same time, Teddy’s utilitarian view of the game is largely irrelevant to most of us.  Football is a fantastic teacher, but that’s not why we love the game.  SAT prep courses are fantastic teachers as well, but we don’t cheer them.  And its ability to teach is not why we’d miss the game if it were gone.  But the physical nature of the game — the violence — is one of the reasons we’d miss it, at least it is for most of us.

Only a short time ago, football glamorized its violence.  The NFL’s Crunch Course videos, which we watched at every pre-game meal in high school, were dedicated to celebrating the vicious, brain-rattling hits that we cheered, and loved, and which have deprived many NFL veterans of their health, faculties, and even lives.  The game will never return to those days.  It can’t, and it won’t.

How much can football shed the violence and remain football?  We’re going to find out in the coming years.  And in some ways, I think USC is in some ways at the forefront of answering that question, though I’m not sure it’s intentional.  One of the issues that dinosaurs like me (or Kevin Bruce or any number of other former players) have with the current brand of USC football is its inherent softness, its unwillingness and, now, inability to stand toe-to-toe and slug it out, not only against the elite programs of college football like Alabama, but sadly even the non-elite programs that thrive on toughness, like Iowa, as the Holiday Bowl showed in all its gory detail.  The USC of old was a bully, a physical menace, a gang that beat on opponents until they quit.  Its great heroes were battle-hardened, courageous Spartans, men like Ricky Bell, Junior Seau, Rey Maualuga, men of remarkable athleticism, true, but who were, at their core, hammers battering weaker opponents, making them hurt, making them quit.

Pete Carroll commented when he joined USC that he looked forward to the day when opponents would again fear coming into the Coliseum.  And they did.  Teams knew that a trip to the Coliseum would not only feature world-class athletes who could run around and jump over you, but that it would also expose you to a crew of roughnecks that would bloody you.  The USC of today, all Air Raid and no power, all softness and no cruelty, just isn’t the same.  It’s a nice, soft program built by a nice, soft coach for a university that probably fears toxic masculinity in all its forms, including that of the gridiron.  For those who knew and loved the stone ages, it’s a bitter disappointment.

If it were even possible, would we tolerate a successful program that could not tackle, could not run the ball, and won all of its games 60-55 by chucking the ball all over the yard?  Sure, if we went 15-0, but it still wouldn’t feel right.  And if the team started losing playing that style of ball, the knives would come out.  As they have.  You can change the character of the program if you win.  But God help you if you change the character of the program and lose.  That’s part of the reason so many fans have reacted so strongly to Clay Helton’s last two seasons.

Of course, soon all of football will likely look like my hypothetical 60-55 games of finesse ball.  In some ways, it’s probably for the best.  We’ve seen so many of our heroes felled – diminished and degraded – by what they went through on the gridiron, that for humanitarian reasons we almost have no choice but to strip away the violence and get closer to flag football and farther from the skull-smashing ways of Bear, Woody, and Bo.  Unloading on a defenseless receiver, peeling back to flat back block a pursuing would-be tackler, meeting a running back’s chin with the crown of your helmet — these are unsafe practices, a relic of a time when we thought getting your bell rung was a harmless byproduct of the game, a source of fun, and a cause for a short stint on the bench, not fear of a disastrous future.  We know better now.  So the game today is a game when virtually any hard hit draws a flag and often an ejection.  I get it.  It’s safer.  It’s better for the players.  It makes sense.  And at this point, it’s inevitable.

And it makes football worse.

Look, I know the sport is dangerous.  I know that we should feel guilty celebrating the brutality.  And I sometimes do.  But it’s also why I love the game so much, why so many of you love the game so much.  It’s why I loved playing it, love watching it, and fret about the game’s future.  I miss what USC football used to be.  One day soon, I’ll miss all of football as it used to be.

I’ll feel guilty, sure, but I’ll miss it nonetheless.