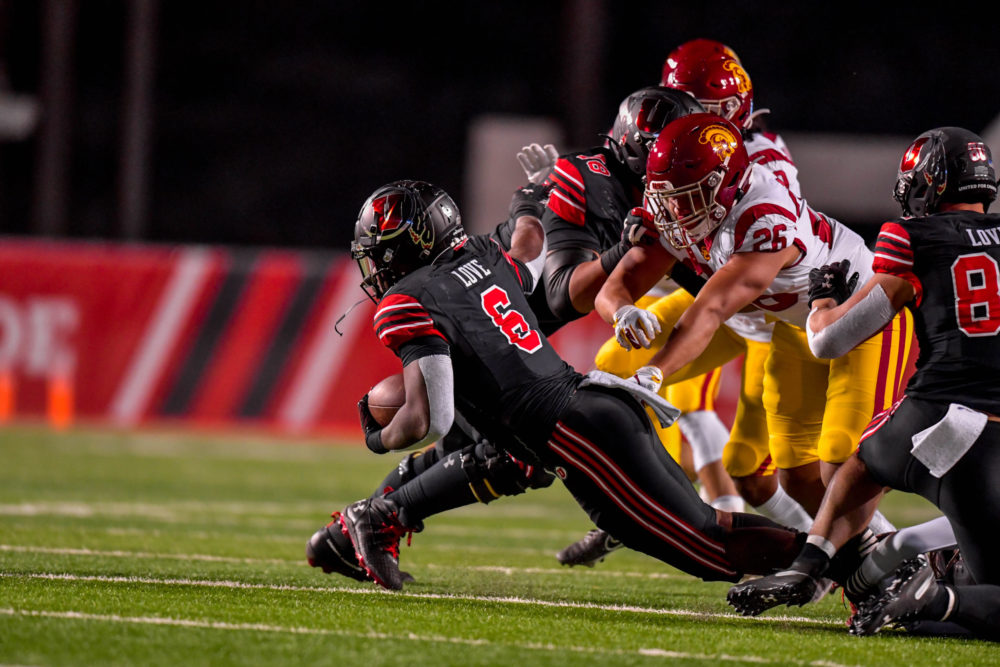 USC has struggled at Utah for years now. I expected another struggle. Granted, the lack of fans surely made the task easier. The fact that Utah hasn’t played a game, has struggled even to get on the practice field, and lost its first-string quarterback about eight seconds after the opening kick helped, too.

But USC’s improvement also helped. And USC clearly improved, at least defensively. Utah isn’t very good right now; that’s obvious. But Arizona football isn’t any good either; it’s only slightly more appetizing than dog vomit, I think, yet the Wildcats gave USC all they could handle last week. So decisively beating somebody, even a bad team, is welcome improvement.

Watching USC’s front seven on defense dominate the one part of Utah’s team that was supposed to be high-quality – the Utah offensive line – was especially nice to see. The Trojans owned that group, and the SC players and new defensive staff deserve credit for dishing a physical beating to Kyle Whittingham’s unit. That’s not an easy thing to do. Even with all of Utah’s troubles, Whittingham believes in and coaches tough, physical football, and USC’s defense stole Utah’s lunch money all night. Kudos.

On the other hand, there is something deeply wrong with USC’s offense. Yes, Kedon Slovis seems uncomfortable. He’s making some bad decisions, and the ball doesn’t look right coming out of his hand. He’s still putting up yards, but his yards per attempt is down dramatically from last year. This is a passing attack that has very little explosiveness. Slovis is a talented kid with a ton of talent at receiver, but right now, this passing offense isn’t scaring anybody.

Yet it still beats the rushing offense. USC’s coaches talk about the importance of running the ball. They don’t really believe it, or they don’t know how. Clay Helton was engaged in happy talk after the Arizona game because the Trojans were meeting his goal of 170 rushing yards per game. He apparently didn’t notice that if you want to average 170 rushing yards per game, you need to clean up against the garbage teams on the schedule. USC should have rushed for 350 against Arizona. If you can’t hit 200 or more against Arizona, you’re going to struggle to average 170 for the year.

And you need to be committed to it. I think Graham Harrell may be allergic to the running game. I think the medical staff keeps hydrocortisone nearby at all times, just in case USC accidentally runs the ball a few plays in a row, Harrell has an adverse reaction, and he needs an emergency injection.

We heard before last season that Graham Harrell’s full offense could be installed in 13 minutes. Maybe there’s something to that philosophy. Or maybe there’s a downside to the other team knowing all four of USC’s plays, including the one running play. Maybe opposing defensive coordinators actually benefit from having an opponent with the same playbook as the Miami Dolphins from the original Tecmo Bowl.

Many USC fans complain that USC fails to go under center. I don’t like all-shotgun-all-the-time either, but it’s not the major issue. Ohio State, Clemson, Oklahoma – much of the college football world – lives full-time out of the shotgun. And everybody spreads the field. Bama does. Even Harbaugh does these days, not that it’s doing him much good. But the best teams still pound the football. They’re committed to it. They recruit and develop offensive linemen to run the football, and they are determined to impose their will.

Clay Helton has either never been committed to running the football or he’s simply inept at developing a program based on running the football. Who knows? He got the job promoting the fairy tale that the power running game is what he’s about. He says he’s the son of an offensive line coach. Boy took after his mother, I guess.

Turns out it really was COVID. Musings isn’t really a personal medical blog, but since I’ve talked about COVID so much, this disclosure makes sense. These things vary widely, of course. But as the data seems to suggest, if you’re relatively young and healthy, you’re probably going to be just fine. I have a sore throat. I’m a little tired. But it hasn’t been a big deal for me. Yet. I guess I should include the “yet.”

So the sickness I felt wasn’t caused by Pac-12 football. Or maybe it was. I’m willing to blame Larry Scott for starting the worldwide pandemic if it would effect some change. Either way, when I watch Alabama, Clemson, or – and I hate to even say it – Notre Dame, I do feel sick. Those teams play faster, more physical, and frankly more exciting football than anybody on the west coast. I hate it.

USC has a dramatic advantage over most of its conference foes. Its tradition and location mean that it should always be favored to win 70% of its conference games. I’m just not sure how much it means to win Pac-12 games these days.

Briefly, I wondered whether the celebrations were a bit much. Don’t get me wrong: it was thrilling to see a USC linebacker flying to the ball, hitting people, and playing with a little reckless abandon. At this point, I’m not expecting to see Junior Seau or Chris Claiborne out there; just a linebacker who wants to be aggressive and hit people. And Mauga was certainly doing that.

Still, it wasn’t obvious that we needed to stop play for a Super Bowl-style halftime show after every tackle. And he wasn’t alone. It seemed more than a little odd that Olaijah Griffin was using his time between defensive series to audition backup dancers for his in-game celebrations. I didn’t love it.

But I was wrong. Mea culpa. Let’s pull out the fireworks, the Lord of the Dance choreography, the Janet Jackson wardrobe malfunctions. Whatever these guys want. At least they’re having fun. And fun seems to be in short supply these days when it comes to USC football.

I turned 47 this week. That seems a bit young to have become the old man who is constantly screaming, “Get off my lawn!” Yet here we are. I’m the “Get Off My Lawn!” columnist. Lately, whenever I watch, think about, or write about USC football, I morph into every character Clint Eastwood has played over the last 25 years. And I’m just not having much fun. I talk to other USC fans. I get the same impression from most of them.

It wasn’t always this way. Mediocrity doesn’t always mean the death of fun. USC football wasn’t very good in 1990, but I loved that 45-42 win over the Bruins. That was fun. The 2001 team wasn’t pulling any top-10 votes from the pollsters, but 27-0 over the Bruins was fun. Really fun. And the 1996 team was bad. But that overtime win over the Irish is still one of my favorite USC moments. That wasn’t just fun. It was euphoric.

What’s changed? In the old days, even when USC wasn’t very good, I knew USC wanted to be good. There was never any doubt in my mind that Paul Hackett was going to get fired, for example. I never thought that the USC administration was rooting for Hackett to just get to 8-4 so they would have an excuse to leave his coaching regime in place and continue their national irrelevance. Now I figure every time USC looks bad and beats a lousy conference opponent, there are big sighs of relief from Folt’s office and Caruso’s yacht, because they can continue to justify doing nothing to fix the football program’s underachieving and national irrelevance. Folt can keep giving her “I love USC football” speeches to Salute to Troy with a semi-straight face.

It’s not so much that USC is light years away from Alabama and Clemson at this point – because every program has down periods – but more that other blue-blood program at least try to hire Whitney Houston and ours is thrilled to pay $4.5 million a year to a guy who sings at the local karaoke bar. And we know they are determined, come hell or high water, to keep Karaoke guy in that position. He sings with integrity, I’m told.

Even so, it’s not Karaoke guy’s fault. I don’t begrudge a guy who wins the lottery. Some people wake up one day to find that they have $25 million in the bank that they didn’t really earn. And that’s okay. More power to ‘em. Now, it would be nice if the fortunate lottery winner could admit that he stumbled into his fantastic fortune and didn’t pretend to have it all figured out. But that’s probably too much to ask. We probably all have a tendency to think that our good fortune is earned even when no objective observer could possibly agree. So I don’t begrudge the unearned money and position. I’ll even understand if you give press conferences where you talk as if you genuinely believe that your fortune is a result of planning, hard work, and dedication.

Just understand that the rest of us are going to have a hard time having fun while you and your enablers pretend that this state of affairs makes sense.

Maybe it’s just me. Maybe the rest of you are loving every minute of it. I doubt it, but maybe. Either way, USC football has been a big part of my life for almost 40 years. I love USC football, even when it doesn’t love me back. I just hope the fun returns someday. Because this just isn’t any fun.

So Kana’i, Olaijah, it looks like you guys are having fun. If so, great. Keep dancing. Keep celebrating. I’m good with it. At least a few of us are still enjoying ourselves.