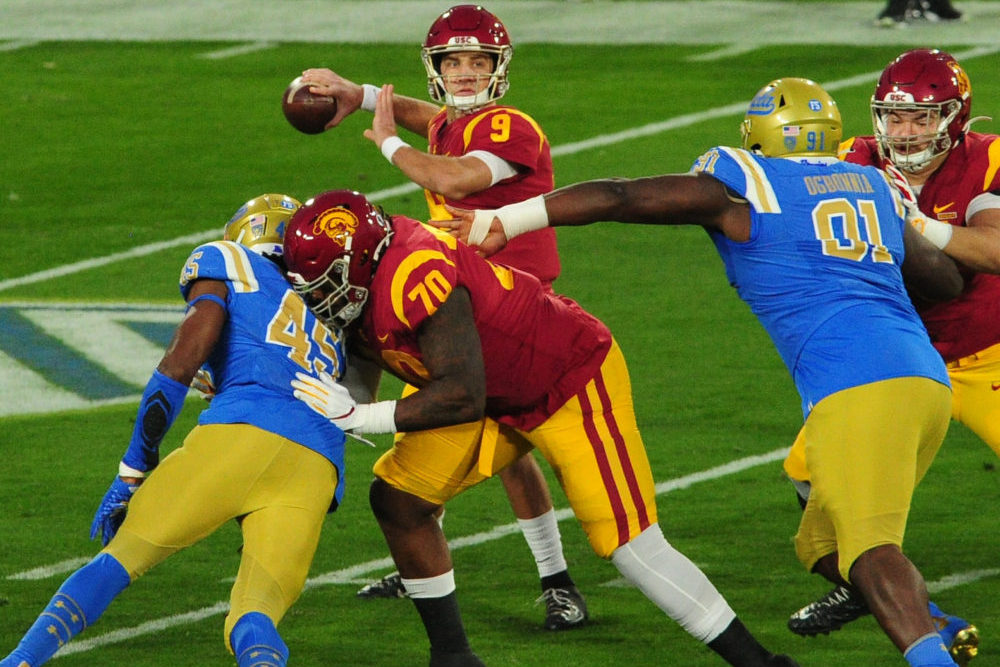 Don’t let the face fool you. Yes, he looks like he just wandered in from a junior high chess club. Or a boy band audition. And, no, he probably won’t start shaving for a few more years.

But Kedon Slovis is an assassin.

He’s not perfect. He throws some flutterballs. That first interception was a terrible decision. But when the game is on the line, Slovis is a cold-stone killer.

He has three game-winning TD passes in the last minute this season. In his career, Slovis has 13 TD passes and no picks in the fourth quarter. The kid is clutch. When you need him to come through, he does.

It’s not necessarily a great thing that USC has needed three last-second TD passes in five games this year. Winning on a last-minute TD to beat a horrible Arizona team, for example, is a little embarrassing.

And over the long term, you just can’t live this way. Nobody can survive by winning close games all the time. The probabilities catch up with you eventually. Clay feasted off close wins in his first two years and got destroyed in close games his third year. That’s the way it goes.

But not all last-second wins are created equal. Beating Arizona that way? Gross. But beating your rival in a close game? Beating a pretty good UCLA team on national television like that? Overcoming an 18-point deficit in the last minute? Ripping out Bruin hearts at the very end? Yeah, that’s not like beating Arizona in the last minute. This game was different, and it was beautiful.

Not perfect; definitely not perfect. While it made some huge plays, the defense was pretty poor overall.

Thirty eight points and 1/3 of a mile in yardage isn’t good, and there were a number of big plays because guys couldn’t get lined up. There were some big mistakes on both sides of the ball. There were odd decisions on two-point conversions (discussed below). For the first 33 minutes of the game, we saw what I feared we would see. But the Trojans didn’t quit.

It took +1 in turnovers and two very bad special teams decisions by the Bruins. But our guys came through.

And let’s give credit where it’s deserved: Clay Helton’s teams don’t quit. They don’t always play very well. Sometimes they play like garbage for large stretches, but they never quit, and he and his team deserve a ton of credit for that.

This game doesn’t solve all the very real problems with the program. But let’s leave those for another day. Because for this one week, at least, all is right with the college-football world: USC beat UCLA again.

And don’t look now, but USC is now 17-5 against the Bruins since that nightmarish eight-game streak. Hope you enjoyed that unnecessary bootleg, Cade.

There are a lot of game balls in this one. Kedon Slovis, obviously. The receiving corps was great again. Drake London is consistently a monster after the catch. Amon Ra was productive again (and because he’s so consistently good, we’ll overlook the interception on his dropped pass). And the forgotten man, Tyler Vaughns, put the team on his back in an important stretch in the third quarter. Nice work by all those guys.

And how about the freshman with a huge kick return to set up the winning score? UCLA puts every kickoff deep into the end zone all night and then allows a return at that point? Wow. Somebody didn’t watch last year’s USC-Oregon game, I guess.

Tuli Tuipulotu is playing well beyond his years and his star rating. That is one stud freshman. Vavae gave a great effort running north-south and running hard. Alijah Vera-Tucker is dominating.

And let’s not forget Talanoa Hufanga, who has earned his place in the USC safety pantheon alongside Mark Carrier, Tim McDonald, and Troy Polamalu. We’re watching one of the all-time greats here, people. Enjoy it.

Can somebody please get Clay Helton a chart of when to go for one and when to go for two? Going for two down 28-23 in the third was a mistake. It was too early, I think, and while I’m open to teams being more aggressive about going for two, that’s a strategy best employed by teams with good short-yardage offenses. It was a mistake. But not his worst mistake of that kind, because you might be able to come close to justifying going for two when your offense is rolling.

But not going for two at the end when you score to go up four points? That was absurd. It doesn’t matter at all whether you’re up four or five. In fact, I’ll go a step further. You’re better off taking a knee than kicking it there. The extra point does nothing for you. Rather than kicking the one, you’d be better off avoiding any risk that they’ll block the kick and take it back the other way, which means that a field goal would be enough for them.

So, simply put, an extra point is completely worthless. But it could matter a great deal whether you’re up five or six. If you’re up six, the opponent still has to convert the extra point to beat you. Extra points aren’t automatic in college football. There may only be a one-in-twenty chance that the other team misses, but that’s still something.

More importantly, if UCLA were to score a TD in sixteen seconds against their biggest rival to tie the game, the likelihood that they’d get a celebration penalty is pretty high – this is the Pac 12, you know – and then the extra point is equivalent to a 35-yard field goal.

Bottom line: there is no excuse whatsoever for not going for two in that situation. It ultimately didn’t matter, of course, but that was a foolish coaching decision. It wasn’t a strategic move; he just didn’t think through the issue. That’s why he needs a chart: so he doesn’t have to think.

Some people have questioned whether college football should have been played this year. Last night was a good example of why it should have been. There is absolutely no reason to believe that anybody’s life was put in jeopardy by that game last night, and if you haven’t seen USC’s players celebrating in the locker room after the win, take a look. That’s a moment those guys will never forget, and I’m glad it wasn’t taken away from them.

USC isn’t going to the playoff. This is a good thing. Our guys feel good about themselves right now. They have some momentum. They have a good chance of winning the conference. The recruiting class is looking solid. That’s going to have to be good enough.

They don’t deserve one of those spots. The Trojans have only played half a season, and they’re fortunate not to be 2-3. And let’s be honest: a New Year’s Day date with Alabama would not be a prize for this team. William Wallace had more fun at the end of Braveheart than USC would have in that game. Custer was more competitive at Little Big Horn than USC would be against Bama this year. This If anybody associated with USC starts to lobby for inclusion in the playoff, they need to get this speech from Mickey.