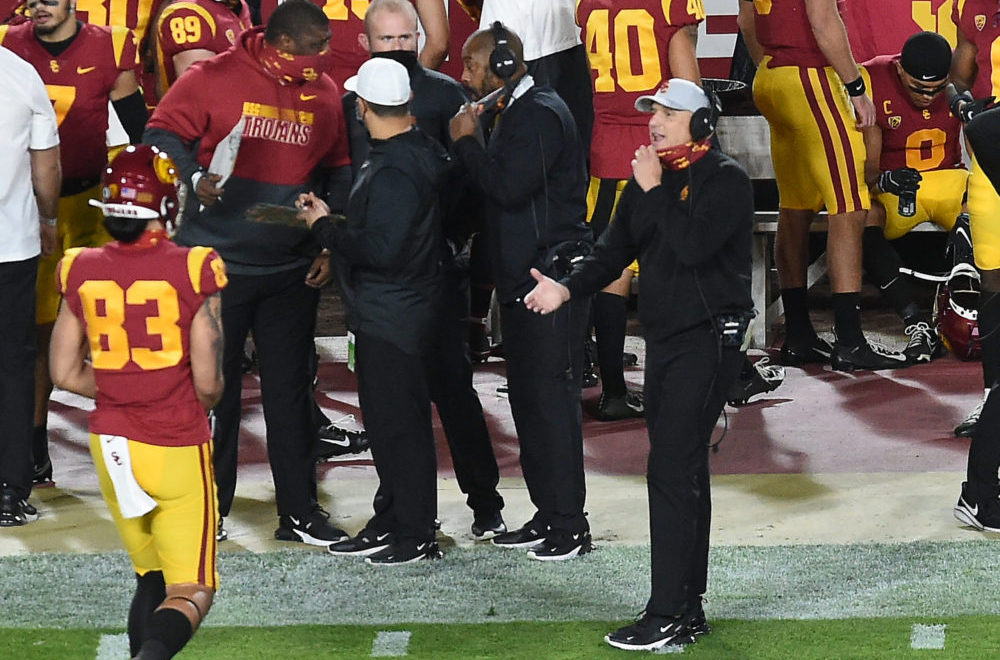 How many assistants must be sacrificed to maintain the fiction that Clay Helton is not at fault for the state of the USC program?

In the HBO series Succession, when a controversy threatens the future of an international media conglomerate, Logan Roy, the CEO and the family patriarch, gathers the family and the company’s key executives to a meeting to determine which underling will take the bullet to save the company – and, of course, save Roy.

I doubt USC’s assistants get to sit in on an annual blood-letting meeting. But it is remarkable how the oh-so-nice Clay Helton goes Logan Roy every offseason, putting bullets into his assistants – metaphorically speaking; Clancy Pendergast is very much alive – to prop up his crumbling regime and save his own job.

And I do mean Clay Helton’s assistants. The guys getting thrown overboard the last few years were not inherited by Helton or forced on him. They were his choices, and in many cases, Helton was telling us how great they were until the very moment he signed their pink slips.

Wild West lore says that Billy the Kid took out 21 men. We’re not quite to 21, but give it another season or two….

None of this is to say that all these assistants were performing well. A lot of them were not. Everybody can see that the program is struggling; it’s not much of a leap to conclude that at least some of the assistant coaches are failing. And some of the assistants – Neil Callaway, John Baxter – were so subpar that it would be hard for anybody to justify bringing them back. Although Clay did, a few times. Others – Justin Wilcox, Clancy Pendergast, Chad Kauha’aha’a, Tim Drevno – have had success at other times in other situations.

Either way, one of the primary jobs of a head football coach is to hire a staff that can recruit, teach, and develop. If Clay Helton has hired two consecutive offensive line coaches that are incapable of doing their jobs – and Clay concedes as much when he fires them – who, exactly, is most responsible for that failure? And – whoever that person is – will he ever be held accountable?

Successful programs try to hold onto assistants who become hot commodities and can leave for promotions at other programs. Failing programs blame assistants, fire them, and pretend that the next group of guys is the answer.

USC is trying to save Milli Vanilli by firing drummers and backup singers and leaving the two lead “singers” in place. How long are USC fans and the college-football media supposed to watch this spectacle before openly saying what we all know to be true: that the leader has failed, and that nothing will change until a new leader is hired?

I watched those playoff semifinal games. The gap between those programs and USC is frightening. Twelve years ago, USC would have competed on an even playing field with those programs. Now the Trojans would get blown out by the two teams that just got blown out.

It’s hard to believe that the gap will close any next year. USC is losing many of its best players to the NFL. I wish those guys the best; USC’s best players should go off to the NFL. You know who won’t be going to the NFL? I remember the days when the offseason rumor mill would start up about Pete Carroll taking NFL jobs. I used to hate that. Maybe that’s our silver lining: we don’t hear stories like that anymore.

So hire another offensive line coach? Sure, why not? But don’t expect anybody to believe that this will solve what’s fundamentally broken about USC football.

At some point, we’ll all get another newsletter from Mike Bohn. He’ll talk about how some Olympic sport that doesn’t draw 500 spectators is doing really well. And good for those student-athletes. I wish them nothing but the best.

But when you’re in charge of an organization that has one critical asset, and you fail to protect that asset, don’t expect anybody to applaud all of your other successes. If the director of the Louvre allows the Mona Lisa to be destroyed by a water leak, he shouldn’t send out newsletters touting how he added six water fountains and put a new coat of lacquer on the park benches.

The USC athletic department has a single crown jewel: the football program. It is the most-visible, most-important program by far. It gets more viewers in a single year than all of the other programs do collectively in a decade. It generates all of the money that allows the other ones even to exist. Pat Haden used to try to fool us with his talk about how all of the sports are equally important: Look over here! This team that none of you saw play even once won a championship! Things are good! Don’t try that, Mike. Your career goes as USC football goes. You know that. You didn’t hire Captain Smith, but he’s yours now. Don’t follow him to the bottom of the Atlantic.

Maybe I’m rushing you. You’ve only been in the job 412 days. Taking a fire extinguisher to the flames engulfing the athletic department’s only truly valuable asset might not be a first-500-days’ priority. I’m sure there are drapes to be picked out and fire exits to be identified. Still, maybe this issue can soon rise to the top of the to-do list.

At the very least you could check with Acting Athletic Director Carol Folt and see whether she’s willing to authorize something.

But an obvious Plan B now exists. A guy you know, one you hired, one you worked with. A guy who has turned in a couple of excellent seasons and will be the hottest coach on the market this year. Don’t let somebody else steal him away. Do what you know you need to do. Do what literally everybody knows you should do. Hire Luke Fickell and jump into that lifeboat before it’s too late. Give your career a chance.

Yes, USC is now selling T-shirts to commemorate the year it played half a season, avoided a 3-3 record against the worst schedule in USC history through two miracle finishes, and got embarrassed in the conference championship game by a 4-3 team that got clobbered by Iowa State.

Last I checked, the Lakers don’t put up banners and sell T-shirts for winning the Pacific Division. The Dodgers don’t give out rings for getting swept in the National League Championship Series. South Division Champions T-shirts? That’s embarrassing. If UCLA did this – and UCLA probably would – USC fans would mock them without mercy, and rightfully so.

The soft bigotry of low expectations. Clay Helton is likely coming back for a sixth (!) full year and USC is selling second-place shirts. The plaque for the alternates is in the ladies’ room, fellas.

Help me, Luke Fickell. You’re my only hope.

Is Texas football now going to self-sanction? I don’t know what NCAA violations they’ve committed, but if they’re really considering hiring Steve Sarkisian, they must have done something really bad.

There is an urban legend that Sark failed as USC because of alcohol. Not so. The alcohol problem got Sark fired four years faster than he would have otherwise. (Well, with the present USC leadership, 10 years earlier.) The problem with Sark is that his teams were soft, undisciplined, and simply not very good. He’s a better offensive coordinator than Clay Helton, and he’s a good recruiter, especially because his success as a lieutenant to legends Pete Carroll and Nick Saban gives him a story to spin to gullible recruits. But it’s fool’s gold. Carroll and Saban could largely cover Sark’s enormous flaws. When he gets the big desk, there’s no hiding them any longer. Sark is not an improvement on Tom Herman. If Texas goes through with this, it’s a colossal blunder and there should be dancing in the streets of Norman, Oklahoma.

You know what, Horns, do it. Sweet revenge for the Rose Bowl.

Congratulations to the Colorado Buffaloes. No, not the team. They got steamrolled by a coach so bad he needs to be replaced by Seven-Win Sark. I’m talking about their medical staff. Those guys did a remarkable job finding a way to play despite the overwhelming medical risks from COVID. For other schools on the west coast, the only safe bowl games are the New Year’s Six games. Pac-12 teams can play in those games. Those stadiums are sterilized, I believe. But the second-tier games that USC, UCLA, and Stanford get invited to are notoriously unsafe. Only the bravest or most foolhardy would even attempt to play in those. But somehow Colorado managed to pull it off, and it appears they did so without suffering a single serious illness or hospitalization. That’s Manhattan Project-level stuff. Congrats, Buffs medical staff.

Now, please check on Karl Dorrell and see if he’s still alive. When I see him on the sidelines, I sometimes wonder.

That’s a nice finish on the recruiting class. This looks like a solid class for the Trojans. Not extraordinary. Extraordinary USC classes look like the one Alabama is pulling in. But picking up blue-chip defensive talent will certainly help. There are programs, like Matt Campbell’s Iowa State, for example, that frequently knock off teams with better talent. Clay Helton’s USC is not such a program. If USC is going to win, it needs to be substantially more talented than the competition. So Korey Foreman, welcome aboard! Be the superhero your team will need you to be.