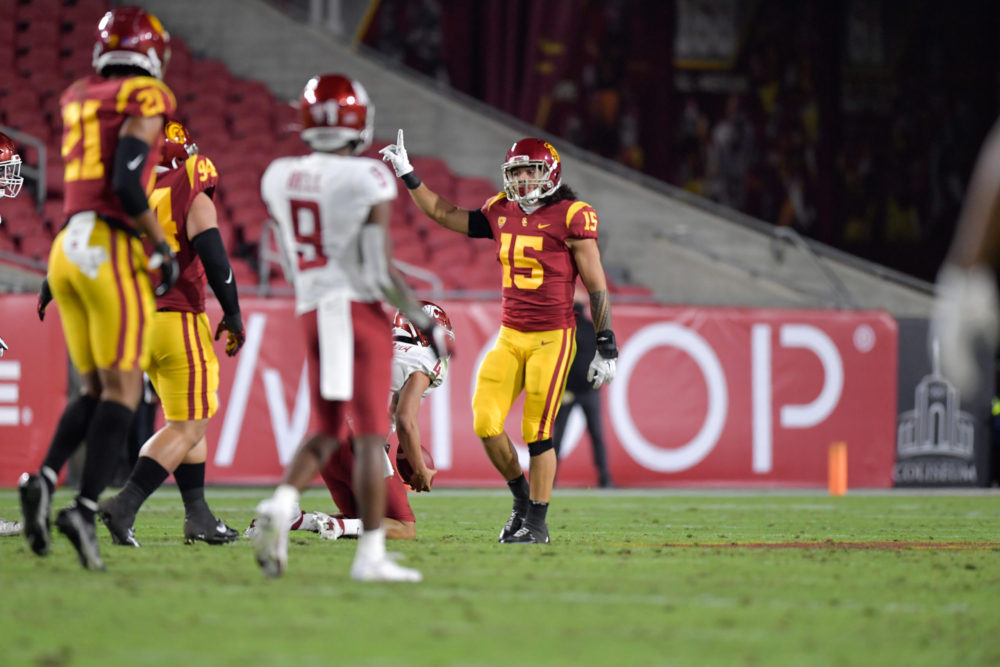 It’s hard to know what to make of a game like that. A 35-0 start is nothing to sneeze at. Yet the offensive ineptitude the rest of the way is hard to ignore. The defense was aggressive and physical. The offense was … well, whatever you call it when you rush for five yards (five!) against a lousy defense.

Washington State came out with a stupid game plan defensively – you’re really going to play man against USC’s receivers instead of sitting back in a soft zone!? – and self-destructed on offense. USC took advantage to build a big lead, and then struggled for the bulk of the game against a weak opponent. The Trojans had some missing pieces along the offensive line, and it’s tough to stay focused when you jump out to a five-touchdown lead early, so that struggle might be understandable.

Except struggling against weak teams for long periods of time is what USC does, so the last 40 minutes of the game is hardly an aberration.

I think we can draw the following conclusions:

1) If you’re going to play man defense against USC, you probably need to be named Clemson or Alabama. If not, you had better get pressure on Kedon Slovis. If you don’t, USC’s wideouts will embarrass your secondary.

2) USC cannot run the football. Look at the season stats:

Yuck. And that’s against a truly awful schedule. There’s no Notre Dame or Alabama to skew the stats. Even in the first quarter when everything was going right, USC had to throw short passes into the end zone because the running game is awful. USC had the perfect opportunity to establish its running game last night. Up big, playing against an opponent who is weak
defensively, that is when you pound the ball. The Trojans couldn’t. They had Kedon Slovis dropping back and taking hits in the fourth quarter because Clay Helton was desperate to get to 40 points and the offense has no ability to do anything else. Five rushing yards against that opponent under those circumstances is horrific.

3) USC dances more than the Jackson Five. USC games are like American Bandstand on grass, only with less run blocking.

4) USC is more physical defensively this year. They are playing faster and hitting harder. There are some good players on that defensive line, including guys like Figueroa and Tuli from whom I expected very little. Mauga has been a huge addition.

5) USC has playmakers who can make things happen against just about anybody. But it also has long stretches where it looks terrible against even the worst competition. Three points and 73 yards over two and a half quarters against a bad Wazzu defense? Geez.

6) USC hasn’t played anybody with a pulse all season. This isn’t a USC schedule; it’s a San Jose State schedule.

So the season comes down to one game next Saturday against the Bruins. Being that this is the worst schedule in USC history, losing to UCLA and finishing second in the south is clearly unacceptable. The Trojans haven’t played a good team yet, and they won’t play a very good team Saturday either. But it’s the best team they will have seen, a motivated team that is much improved, can run the ball pretty well, and I think will likely give USC all the Trojans can handle. The offensive line better show up for this one.

If USC can’t run the ball, and if UCLA can get in Slovis’s face … well, let’s not even talk about that.

Bruce Feldman opined the other day that Graham Harrell would not be interested in the Utah State job because “he is penciled in to take over for Clay Helton and land the USC job. Helton’s status is always tenuous at best, so Harrell could wait and take the USC job or go get head coaching experience and return.”

First, I cannot help but wonder just how “tenuous” Helton’s job status is. It should be tenuous, of course, but he’s sure spent a lot of time on that sideline for a guy whose job status is “always tenuous.”

Most importantly, is Feldman right that USC has Harrell “penciled in” as Helton’s replacement? Graham Harrell deserves some credit for spotting Kedon Slovis’s talent and helping him to a very good freshman year. But on the whole Harrell is tolerated by USC fans only because we suffered through the horror of the Clay-Tee Gumbo Offense before that. We would cheer almost anything after that debacle. But we’re not cheering too loudly at this point, and for good reason.

Harrell’s teams can’t run the ball. Can’t deal with teams that drop eight into a coverage. Can’t adjust. He’s brought a WWF belt, a commitment to softness, and mediocrity. Is that enough to become the heir apparent, some sort of USC Prince of Wales?

Promote a mediocre offensive coordinator from a failed regime with very little useful experience to head coach? Haven’t we tried that already? Clay actually had more experience than Graham Harrell when he got hired, and we all know that his primary qualification was that he just happened to be standing close to Pat Haden when Pat needed to hire somebody.

“So I have to hire a football coach, eh…. Smithers, who is that young go-getter?”

And Feldman tells us USC wants to do this again? Is this some sort of cruel game, a joke that is being taken just a little too far? Is Ashton Kutcher going to pop out any minute and tell us we’ve been punked? Is it an experiment of the sociology department? Let’s see how much pain we can inflict on USC football fans and still have them support the program?

“Okay, let’s brainstorm, people. How can we hurt them now?”

“Let’s make them hire another insider who has absolutely no paper qualifications for the job.”

“Yeah, yeah – oh, and let’s poke every fan in the eye with a stick as they enter the Coliseum!”

I don’t know what kind of sources Feldman has. He’s obviously paid to know these sorts of things, but many media figures are paid to know things and seem to know very little. So there’s still hope. But if Feldman is right, USC’s administration is stark, raving mad.

Every game that Hufanga plays is a joy. He’s been great since day one but unable to stay healthy. We’ve had him healthy for four games so far. I hope it continues. I love that guy. Great, great football player.

For obvious reasons, I’ve become something of a connoisseur of college football coaching malpractice. Let’s take a look at an example from the fascinating end of the Louisiana-Appalachian State game – at least, I think this was coaching malpractice, although the coach in question was in a tough spot and is still defending his tactics.

I wasn’t watching this game, of course. I’ve made it 47 years without watching a Louisiana game, and I intend to keep that streak alive. My only experience with App State was the game they beat Michigan at the Big House. Like most college football fans, I was a big Mountaineer fan that day. The feeling subsided relatively quickly, to be sure, but for that one afternoon, the love was strong.

So this week, Louisiana leads App State 24-19 and has the ball at its own 27 with 2:05 left in the game. Now let’s get this out of the way now: Louisiana has already had four bad long snaps, three of them on punts. I don’t know why a college football team can’t long snap – I’ve never a high school team with that many bad snaps in a single game – but let’s stipulate that Louisiana can’t. Dire circumstances had forced Louisiana’s coach to reject Rick Neuheisel’s motto that “Punting Equals Winning.” For his Louisiana team, “Punting Equals Death.” We know now, he would not be punting. So the question is what to do.

They start as you’d expect with Louisiana running on first and second down and gaining eight total yards, setting up a 3 rd and 2. App State has to burn two of its three timeouts. That’s a pretty good spot to be in. On third down Louisiana throws an incomplete pass. Now it’s 4th and 2 with 1:46 left.

Louisiana had already rejected the usual move; it would not send out the punting team. It also rejected going for it.

Instead, as most of you probably know, the Louisiana coach decides to have his QB take the shotgun snap and run backwards for a 35-yard loss and a safety. Now App State only needs a field goal to tie. Louisiana must also kick from the 20, so you expect App State to get very good field position, and they do. They start at their own 45. Louisiana only survives when App State misses a chip shot field goal attempt.

My question is: why did he do this? First, why the pass on third down? If you know you’re not going to punt, you have two plays to pick up two yards. Run the ball on third and two. You have a reasonable chance to pick it up, and you force App State to burn its last timeout. On fourth down, you have two options. First, you can go for it if your third-down play wasn’t a disaster, and you can still throw the ball, because on fourth and short, the other team still has to respect the run. Taking your shot at a first down isn’t terrible. The odds are in your favor, and the other team still must score a touchdown to win.

Second, you can quick kick on fourth down. Assuming you’re still in fourth and short, the other team is going to keep the defense on the field, and you run all of your offensive plays out of the shotgun anyway. Line up with your offense and quick kick. App State has no timeouts left if you ran on third down, and you probably force them to drive 70 yards or so without a timeout, needing a touchdown.

Isn’t that the better option?