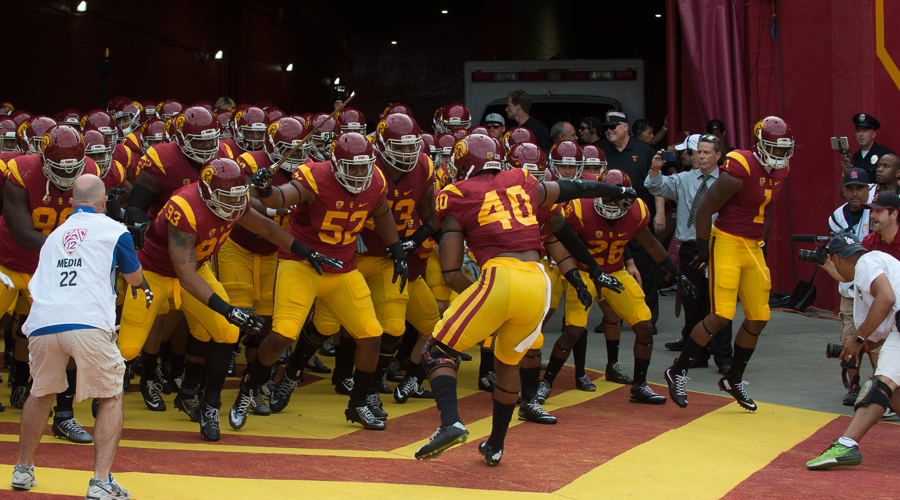 … So without further ado, I introduce the very first Dictator of College Football, Chris Arledge.

[The Spirit of Troy’s Tusk blares over the sound system, and Arledge enters riding Traveler, surrounded by Song Girls throwing rose petals. There is much raucous applause … and some isolated booing, which is quickly squelched by security.]

Thank you so much for coming tonight. Thank you. No, really, thank you. Geez, just sit down and stop cheering so I can talk for a minute.

It seems like so long ago now that my running mate, Kevin Bruce, and I started this journey. It’s been a long trip. A wild trip. Nobody thought we could pull it off. People didn’t understand why our campaign slogan was in Latin. They didn’t understand what Carthage had to do with anything. They didn’t know why we thought we could win. People said, “How could you possibly hope to beat Lou Holtz? The man is a college football legend.” He is.

And he was a fine opponent. But we knew his weakness. We knew if I just raised lots of issues that contain the letter “s” in the debates, Holtz’s responses would be unintelligible, and he would be at a distinct disadvantage. Thanks to that strategy and to all of you, we did it. [More raucous applause.]

For too long the people have been forced to tolerate a wicked and corrupt NCAA, with its arbitrary rules, its biased hearings, its general incompetence. Now the torch has been passed to a new generation of college football Americans who will bear any burden to make sure college football does not vanish from the earth.

Thank you. Thank you so much.

Before I take questions, I’m pleased to announce that I’ve already signed some critical executive orders to restore order to college football.

First, I have used my powers over all personnel decisions to remove one college football coach from his position. You’ll get more details tomorrow, but let’s just say that he has been informed, and we have offered substantial economic incentives to four different programs if they are willing to hire him – UCLA, Notre Dame, Oregon, and Alabama.

Second, we have started work on our new Dictator’s Palace in Indianapolis. People have asked me why Indianapolis; wouldn’t it be more of a rejection of the NCAA if you chose a different capital? Maybe.

Our first thought was to take over Larry Scott’s Pac 12 headquarters since Scott will be transferred to oversee the student-run TV station at William Jewell College. I’ve always loved the Scott Taj Mahal. But Gavin Newsom’s office told us in no-uncertain terms there is room for only one dictator in the State of California, and we have been informed that Pat Haden will, under no circumstances, set foot in the State of Indiana. So that’s our spot.

Fourth, Barry Sanders’ Holiday Bowl statistics will be included in his season statistics for record purposes. There is no longer any doubt who turned in the greatest season in college football history.

Fifth, Reggie Bush’s Heisman has been restored. Cam Newton’s has been revoked.

Sixth, and finally, I have created a new conference and playoff system. We will now have four conferences of 16 teams each. Each conference will have eight-team divisions, the division winners will play for the conference title, and each conference winner will make a four-team playoff. And thanks to
the generosity of the Paul Dee estate, every player on the winning team will receive yacht rides and visits from prostitutes.

Was there any opposition to your conference and playoff plan?

Some. This plan was highly popular with almost all of division one football. But my office did reject an emergency appeal from the SEC, which demanded an eight-team playoff with seven automatic bids for the SEC and one at-large bid available to an under-.500 junior college team.

Fans of certain SEC programs have threatened to poison some trees if they don’t get their way, but the schools themselves came around when I threatened to impose a new third-grade literacy test that must be passed before a game can be played. Yes, Paul, do you have a follow up?

I just want to understand. You’re saying that players would have to prove they can read at a third-grade level or the game would be cancelled?

Not players, Paul. Professors. Professors at the schools would have to pass the literacy test. Other than Vandy, there was some real concern throughout the conference, so they agreed to my plan.

Based on your attire, can we expect you to always wear faux military uniforms with unearned medals and ribbons like some tinpot, third-world dictator?

Also, sir, my attorneys want to know if you plan to wear any mascot heads. If so, I’m supposed to give you this cease-and-desist letter.

Yes, on the uniform, Lee. No on the mascot heads.

What do you intend to do about performance-enhancing drugs in college football?

Well, Kirk, my staff proposed suspending Alabama for the first week of the season. They showed a compelling report that doing so would temporarily reduce the problem by 47%. But I’ve said no. I’ve decided … I’m not going to do anything. I’m not saying that I encourage the use of steroids. Not exactly.

I’m just saying – and listen to me everybody; I want to be completely clear about this – there will be no testing of any kind, ever, for any reason. Wink, wink.

Is it true that Kevin Bruce’s role of Vice Dictator is, like the Vice Presidency, worth a warm bucket of spit?

No, I would estimate two buckets, maybe three. Kevin will be leading a committee to improve tackling and running games in college football. His group started this morning. They watched the last two seasons of USC football, and every member of that committee came away more committed than ever before to making sure that nothing like that ever happens again.

And I’ve gotta say, they have some interesting ideas. We’re going to give extra scholarships to teams if teams are willing to use the extra scholarship on a fullback. And Kevin has proposed that while we would still allow teams to gain a first down on 4th-and-1 with a pass–you would still get a new set of downs–when a team engages in such a cowardly, embarrassing act, the public address system must pipe in loud booing and display a picture of the Notre Dame cheerleaders on the jumbotron. So we’re talking about some revolutionary stuff here. I believe Kevin will do a fine job.

Yes, do you plan to play Tusk every time you walk into the room for a formal college football event?

No, of course not. Stupid question. Every time I walk into any room, anywhere, including the Dictatorial Palace.

Will you clarify your intentions with regard to Touchdown Jesus? Do you really plan to destroy it?

No, of course I don’t. And I never said I would. The mural will remain in place. I don’t destroy art. All I’ve said is that Notre Dame will be required to cover Touchdown Jesus with a giant mural of Charlie Weis on game days. Well, it may be a life-size mural. I’m having our engineers look into the dimensions.

And, obviously, I’ve prohibited Notre Dame from ever again saying that their academic standards are higher than the other elite universities in the NCAA. That tiresome lie has run its course.

Shouldn’t that same rule also be applied to UCLA? The Bruins also make that silly claim all the time, don’t they?

Yes, Pat, but we’ve concluded that in light of whatever Chip Kelly is doing in Westwood, there’s no reason to legislate anything about UCLA. Honestly, what’s the point? We’re just going to let those guys jump over the wall and escape practice in peace.

Paul Finebaum, you have another question?

Yes, your eminence. My listeners want to know if you’ve concluded your investigation into the real number of national championships won by Alabama. I have, Paul, and I’m glad you brought it up. Two.

Okay, I have time for one more question. Pat Forde?

Did last year’s national championship count since not all conferences participated?

I mean, I get why the Pac-12 decided that it was the only conference in the country that could not safely play college football in October. Despite the availability of immediate testing, the likelihood of a college football player acquiring COVID at a game or in practice and then actually requiring hospitalization was still roughly equivalent to the risk of getting attacked by a swarm of murder hornets while on your own toilet. So the decision makes sense. Safety first, obviously. But doesn’t the Pac 12’s absence make title illegitimate?

Pat, we looked into that, but we concluded that the Pac-12 technically hasn’t been eligible for the college football playoff since Pete Carroll left USC and ended any hope that the conference could actually win anything. So we’re going to allow San Diego State’s Cinderella title to stand.

Okay, that’s all the time I’ve got. And in light of tomorrow’s announcement, for the very last time: Carthago delenda est.