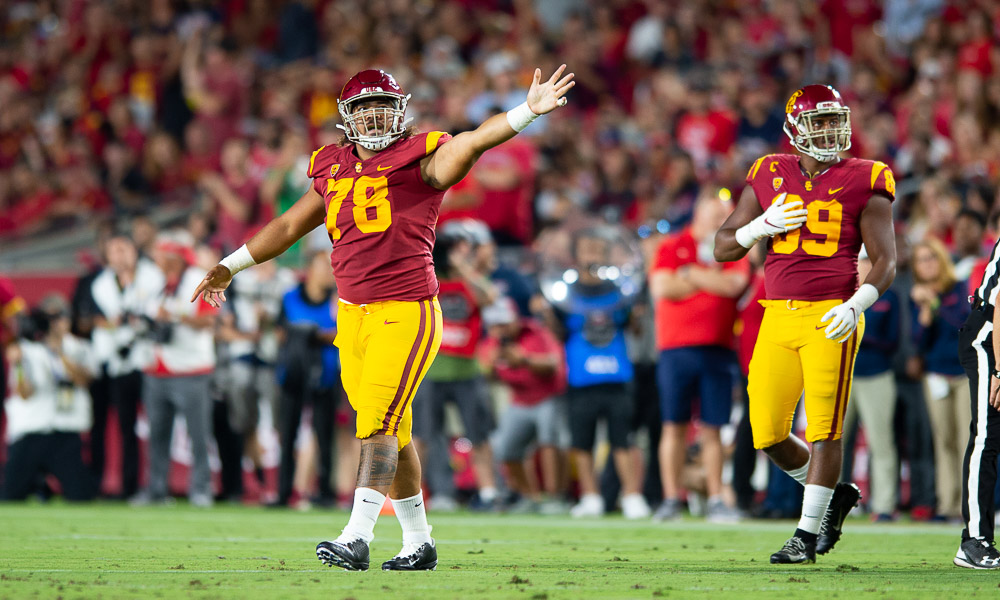 USC has been well-represented on the various 2020 preseason Watch Lists that have been released over the past two weeks. Quarterback Kedon Slovis, wide receiver Amon-Ra St. Brown and Tyler Vaughns and a number of defensive players were recognized last week. This week, a few more have earned their way onto watch lists for various awards.

On Thursday, St. Brown was again named to a watch list, as he joined a total of 50 college football players on the watch list for the Paul Hornung Award, given to the nation’s most versatile player.

This is the 11th year of the award, and while USC has never produced a winner, both Adoree’ Jackson and Marqise Lee were finalists.

As a sophomore in 2019, St. Brown caught 77 passes for 1,042 yards and six touchdowns, and returned 12 punts for 66 yards. He also filled in some at running back when the Trojans lost their top three backs to injury. St. Brown carried the ball seven times for 60 yards and a touchdown.

Earlier this week, the Jim Thorpe Award Watch List was released. Listed among the 49 best defensive backs in the country was USC safety Talanoa Hufanga.

Hufanga emerged as one of the leaders of the USC defense as a sophomore last season. Though he missed three games due to injury, he finished second on the team with 90 tackles. He also added 3.5 sacks, three pass deflections and two forced fumbles. A concussion against Utah forced him to miss the Washington game. Then a sprained shoulder against Arizona forced him out of the Colorado and Oregon games.

Hufanga saved his best for last in 2019, as he recored 18 tackles in the season finale against UCLA, then had 14 tackles, a sack and a forced fumble against Iowa. He’ll be counted upon to lead the USC defense in 2020, as it shifts to a new look under defensive coordinator Todd Orlando.

USC was one of seven schools to have three players named to the Bronko Nagurski Trophy Watch List, joining Alabama, Georgia, LSU, Oregon, Pitt and Washington.

The Nagurski Trophy is given to the defensive player of the year, and the USC names on that list are no surprise, as defensive linemen Jay Tufele and Drake Jackson appeared along with Hufanga.

The trophy has been awarded since 1995 and a USC player has never won, though linebacker Rey Maualuga was a finalist in 2008. Twice, USC players have been honored as the award’s Player of the Week, as Mike Patterson earned the recognition following USC’s 23-17 win over Cal in 2004, and Cameron Smith earned it following his three-interception game against Utah in 2015.

For the USC defense, all eyes will be on Jackson this season to see if he can improve upon what was a phenomenal true freshman season. He’ll play a hybrid defensive end/linebacker spot in Orlando’s defense that alternates between a three and four-man front.

Tufele was also named to the watch list for the Outland Trophy, which is awarded to the nation’s top interior lineman. He was joined on the list by USC offensive lineman Alijah Vera-Tucker.

The Outland Trophy has been awarded since 1946 and surprisingly, USC has just one winner, in offensive tackle Ron Yary. Nebraska players have won the award nine times, while Oregon offensive tackle Penei Sewell returns after winning it last year and looks to be the clear frontrunner heading into the 2020 season.

Vera-Tucker will be one of the most important players for the USC offense this fall, as he is likely to make the move from left guard to left tackle for the Trojans. Keeping Slovis upright throughout even a shortened season will be extremely important for the Trojans, as they have had to go three quarterbacks deep each of the past two seasons due to injuries.