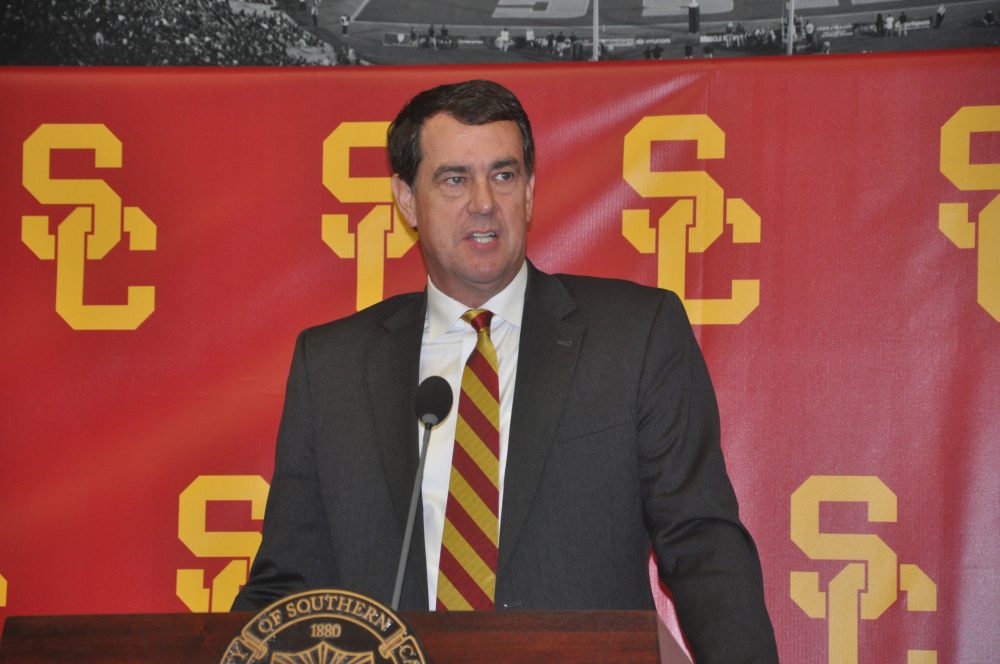 USC wasted no time in celebrating the end of the NCAA-mandated, 10-year disassociation period between the university and Reggie Bush on Wednesday morning, announcing his return in a press release and flooding social media with content of the former Trojan superstar.

On Wednesday afternoon, USC Athletic Director Mike Bohn spoke to the media, saying the effort to put Bush’s reinstatement front and center was by design. Bohn said he wanted to state definitively that announcing and commenting on Bush’s association with USC on the morning of the very first day was “very important” to the Trojans.

Bohn has commented many times that when he arrived at USC, what he wanted to do first and foremost was listen to as many people as possible affiliated with USC. He said there wasn’t a day that went by that he didn’t hear something about Reggie Bush. Bohn said he had an opportunity to visit with Bush and he was struck by his remorse and his sharing of the “challenges of what this meant to him and the devastation he experienced knowing USC was heavily penalized for the situation connected to his actions.”

“That was really important to us, hearing that from him,” Bohn said, adding that Bush also spoke with President Carol L. Folt. “I salute Reggie for being so open with his heart and how he felt about that. I am impressed by that and I know President Folt was impressed by his candor and how devastated he was by how that impacted him and how it impacted the university as well.”

One of the former players that was the most vocal about bringing Bush back was Matt Leinart, and Bohn mentioned specifically that he wanted to thank Leinart for “bringing a unique perspective that maybe we were not award of because we were not here at that time.”

Current Trojans were ecstatic at the news, especially the USC running backs.

Bohn said there was a “strong push of, this is the right thing to do,” by so many people tied to USC. He said their efforts associated with student-athlete welfare and building a student-athlete-centric model at USC are in lock step with this decision. Bohn has repeatedly said that he will do everything in his power to support current, former and future USC student-athletes in every possible way. The hope is that Bush could eventually serve as “an incredible asset” in using his “incredible platform and influential voice to support and empower our student-athletes.”

But Bohn added that Bush’s reinstatement is completely unconditional, meaning the school will not ask him to involve himself in any aspect of the program, such as recruiting initiatives, “that are not special to him and his heart.”

USC doesn’t yet have any concrete plans for how they’ll handle a potential jersey retirement or Bush’s Heisman Trophy that has been returned to the Heisman Trophy Trust. Bohn acknowledged that the decision on the Heisman Trophy is out of their hands, and that while it was important for them to shine a light on Bush today, the bigger concerns for the athletic department right now center on the current student-athletes’ well-being in light of the coronavirus pandemic and a return to campus.

While Bohn doesn’t have a plan for that yet, he acknowledged that the Trophy is important to Reggie, “which makes it important to us.” He will do whatever they can to support Bush in his quest to get that back, “just like we would support all of our student-athletes.”