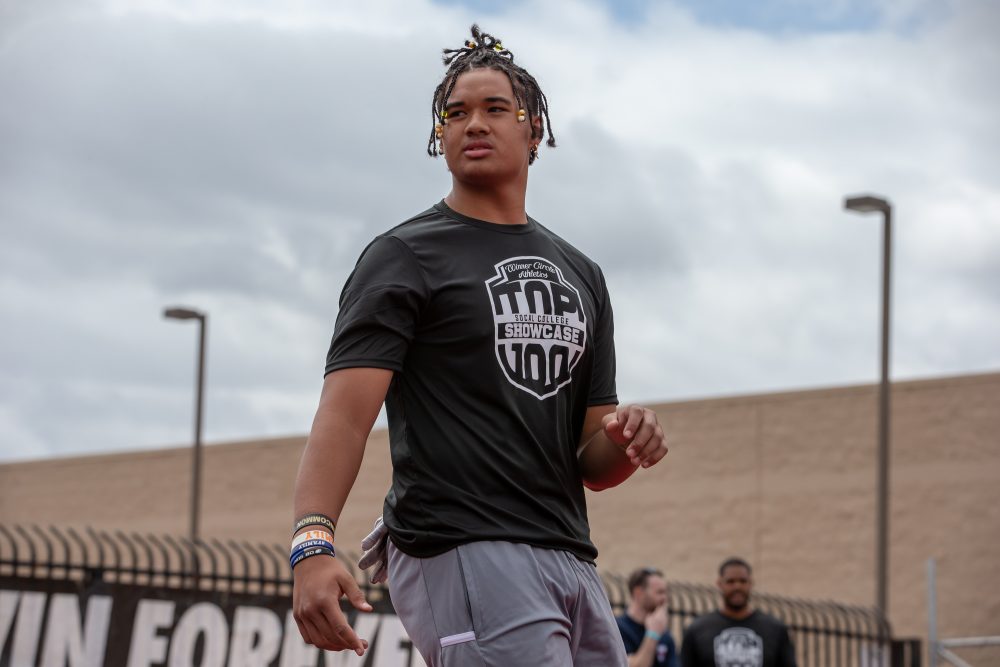 Matayo Uiagalelei did it all for St. John Bosco during the shortened season this past fall. He caught six passes for 76 yards and two touchdowns and recorded 16 tackles, a sack and an interception returned for a touchdown, on his way to being named the L.A. Times player of the year. The scary thing for opponents this fall is that Uiagalelei believes there’s a lot of improvement to be had.

“I played pretty decent,” Uiagalelei said of a sophomore performance at tight end and defensive end that helped him move all the way to the No. 47 overall prospect in the composite rankings, and the No. 15 recruit overall according to 247 Sports. “But I felt like there’s a lot more room to grow.”

Matatyo checks in at 6-foot-4 and 275 pounds, combining that frame with terrific athleticism that allows him to get into the backfield quickly on defense and line up outside as a big wide receiver at times on offense.

The Uiagalelei name has been talked about plenty in recent years. His older brother, D.J. was a top quarterback recruit in the 2020 class who signed with Clemson and will take over as the starter for the Tigers this fall. Matayo was able to visit schools while D.J. was going through his recruiting process, so he had a bit of a head start on this process. But it’s been different for him now being the center of attention on his visits.

“It’s definitely different, but being with him helped me learn, seeing what’s real, what’s fake, what’s hype and what’s down to Earth,” Uiagalelei said. “So I think that’s important.”

Recently, he’s taken trips to Alabama, Clemson, Georgia, Ohio State and USC, and he had positive experiences at all of them. Uiagalelei said he’s very interested in all the schools he visited and has a good idea of what he’s looking for in a program.

“The biggest thing is player development,” he said. “And how I fit in the program and how comfortable I am with the coaches and players.”

A decision on which school to attend is obviously the most pressing question facing Uiagalelei, but he also has to sort out which side of the ball he’ll line up on at the next level. Right now he said he’s completely torn on it, but is confident he’ll be able to come to a decision on that.

Uiagalelei broke down his strengths at each spot.

“I think I have good length for the position and good power, good speed, good explosiveness,” he said of playing defensive end. “It’s just fun chasing after the quarterback, making tackles. And they get paid a lot of money; they get paid the big bucks in the league.”

Uiagalelei stands to benefit greatly from the new NIL rules as well. He’s already a successful music producer and will undoubtedly become more involved in that space over the coming years. That’s an angle the USC coaches are using in this recruitment and Uiagalelei is aware of what being in Los Angeles could do for him in that pursuit.

“I think they’re doing a good job recruiting me right now,” Uiagalelei said. “It’s pretty cool if I was able to stay home. LA is a pretty big area where a whole bunch of musical artists come through, so I’d never have to worry about accessibility to music.”

Uiagalelei still has plenty of time to go through the recruiting process and doesn’t have any kind of timeline set yet for narrowing down options or making a commitment.