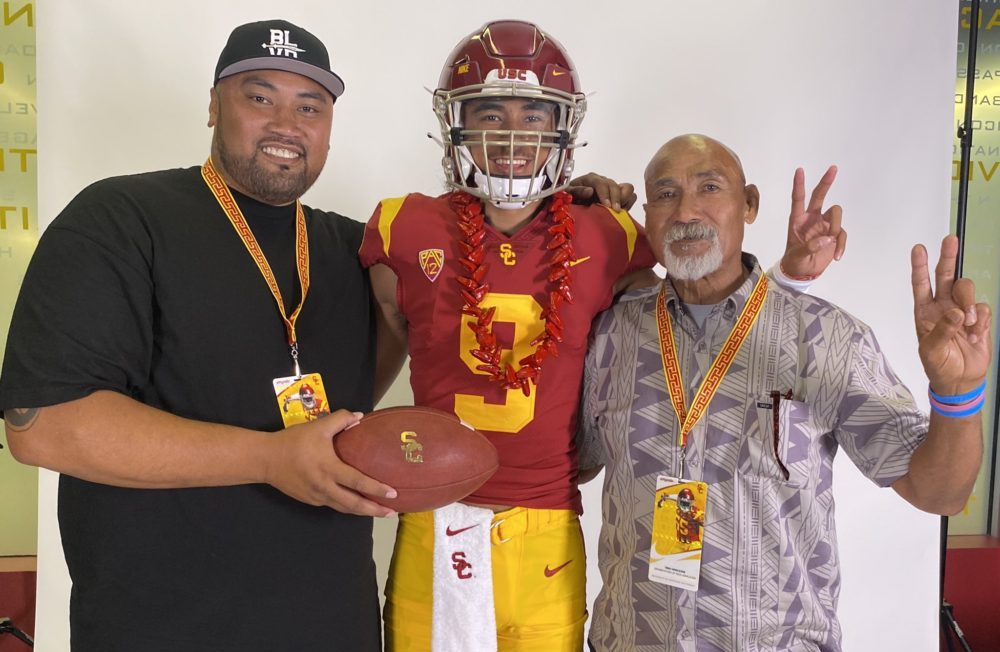 Coming off a successful official visit weekend, USC’s coaching staff looked to keep the momentum going this week and loaded up a significant Monday visit schedule. On hand were some of USC’s most important local 2023 recruits, including quarterback Nico Iamaleava (Downey, Calif./Warren) and athlete Matayo Uiagalelei (Bellflower, Calif./St. John Bosco).

The 6-foot-5, 195-pound Iamaleava is one of the most intriguing 2023 prospects in the country right now. He visited Alabama, Clemson, Georgia and Ohio State recently and picked up offer from Alabama and Ohio State after throwing for the coaches. It was clear that the visits left an impression on him, so USC getting him on campus quickly after that was important.

It’s clear the visit had a positive effect and that Iamaleava is a real option for the Trojans in the 2023 class.

My cousin Big Nic and his Father with his stud QB son @nico_iamaleava8 what a moment for this amazing family. Nico can be the first Polynesian QB ever to play for USC. I have no doubt, if Nico decides to stay home, he will earn his starting position and be the first Poly QB. pic.twitter.com/9PxTtb417k

I can’t speak on Nico and his choice of school. I will tell you this, it’s a different feeling when there’s family on staff! I’ve been on many recruiting trips and visits around the country, there’s no greater joy than to see one of your own welcoming you in, @CoachV_USC ✌🏾 pic.twitter.com/RnZS2T1x6H

Right up there with Iamaleava in terms of importance in the 2023 class is Matayo Uiagalelei (Bellflower, Calif./St. John Bosco), the No. 47 overall prospect and someone who could play defensive end or a hybrid tight end/wide receiver role in college. USC missed on his brother, quarterback D.J. Uiagalelei, in the 2020 class and the Trojans are working to make sure that doesn’t happen again.

As we arrived at USC for Matayo’s unofficial visit, the coaches that was there were cheering “Young Concrete” and took him straight to the DJ booth and made him play one of his beats. What your watching is the direct result of listening to a Youth Concrete beats. pic.twitter.com/qmH7RzwkwL

USC has been home to many Polynesian players over the years, but Monday was special for the visiting families, which also included 2021 five-star J.T. Tuimoloau (Sammamish, Wash./Eastside Catholic) who was in on his official visit.

The home team has always been our USC TROJANS and seeing my nephew Viane @CoachV_USC a former All American HS and former All American College and 4 yr starter at USC being there too as a coach, it just feels right. Choose wisely nephew #FamilyOverEverything #FightOn ✌🏾✌🏾✌🏾 https://t.co/Nt105H6kiQ

#1 player in the country 12th grade JT Tuimoloau and Matayo Uiagalelei 10th grade future #1 Player,….here at USC. It was cool running into the Uso JT and the family. If USC gets JT and Matayo with Nico at QB, going to be a lot of Happy Polynesian fans 🤩🤩🤩 #BigDavesBlueprint pic.twitter.com/wIoLB06u7R

But Uiagalelei wasn’t the only Bosco Brave to visit USC this week, as just about the entire roster made its way to see the Trojans.

That includes 2022 running back Rayshon Luke, a big-time speed back who holds an offer from USC.

Another Bosco standout in attendance was four-star 2023 athlete Jahlil McClain, who would form a terrific cornerback duo with four-star Aaron Williams (Corona, Calif./Centennial), who also made a visit.

It’s never too early to start thinking about 2024 prospects and Bosco has more than a few of those as well, including safety Peyton Woodyard and cornerback Marcelles Williams. Both are likely to be among the top prospects nationally at their positions. Williams is the younger brother of USC defensive back Max Williams.

After being offered earlier this year, it was only right to go visit the BLVD‼️
Thank you @USC_FB @CoachDee_USC @Coach_Naivar @Ballhawk__8 for an amazing day!🌴✌🏽 #FightOn #IJNIP pic.twitter.com/OP2QwptVB6

The visits aren’t going to slow down anytime soon. USC is bringing in four-star wide receiver Chris Marshall (Missouri City, Tex./Fort Bend Marshall) on a mid-week visit. Texas A&M is the likely leader for Marshall, but there is mutual interest and the Trojans will take a shot.

USC is also scheduled to host defensive lineman Zach Rowell (Encinitas, Calif./Torrey Pines) on Wednesday for an unofficial visit. With the way defensive line coach Vic So’oto is recruiting right now, it probably makes sense to bring in every defensive line target USC has on its board. Rowell is a 6-foot-5, 260-pound three-star defensive end who saw his recruiting stock take off this spring. Oregon is very much a contender and Rowell will take an official visit to Stanford this coming weekend.

Wednesday also marks a visit date for players from the FSP program in Washington. That program helped produce 2021 USC signee Julien Simon and many USC targets of the past couple years.

And, of course, nothing to do with recruiting right now would be complete without another mention of the commitment from five-star defensive lineman Mykel Williams (Columbus, Ga./Hardaway), a massive announcement at a major position of need in this class.