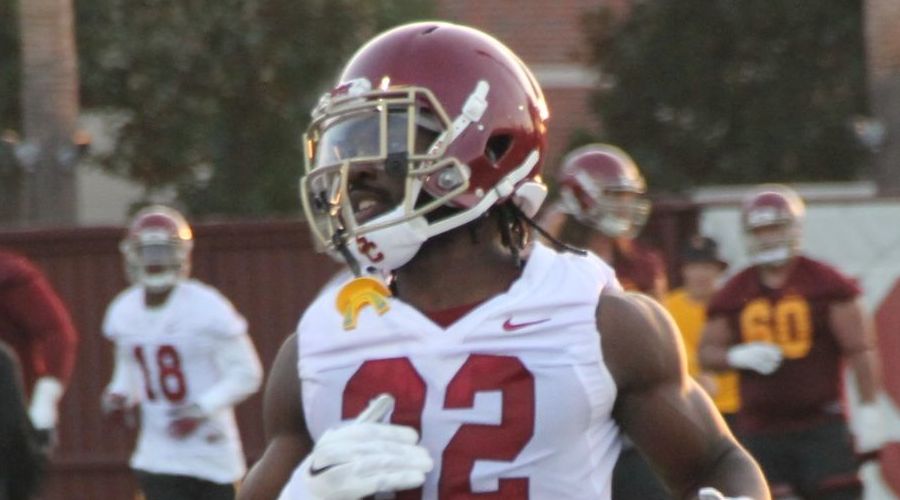 In this week’s edition of the mailbag we look at the fluid situation on the offensive line, position battles, safety rotation and the state of the tight end position.

Do you think part of the offense’s recent struggles may have to do with a lack of chemistry (with injuries, position battles causing the split of reps), and the offense will look better when the deph chart is finalized and the players know their roles and are used to one another?

I’m hoping that kicks things up a notch. You have to imagine it will be a benefit for one of the quarterbacks, either Browne or Darnold, to be named the starter and to allow that player to grow into the role. The situation with Wheeler hasn’t helped either because now you have Zach Banner and Chuma Edoga shuttling around, and there has also been the rotation at left guard. No spot on the field needs the familiarity of knowing the guys next to them more than the offensive line and they haven’t had that yet.

Garry- are we done at DE ? how do we stand with Terrance Lang ?

Lang is going to end up inside. He’s got a 6-6, 275 frame that is only going to grow, he reminds me physically of current Trojan Noah Jefferson, but he is also very raw. Most projections have Lang coming to the Trojans over UCLA and Oregon.

I asked you before spring which coach you were most excited about seeing up close in action. You said OL coach Callaway because you had heard so much about his style. Now deep into Fall camp what do you think about Coach Callaway and his methods and results?

I like Callaway’s methods, his focus on fundamentals, his no-nonsense approach, etc. The guy looks, talks and acts like an offensive line coach. But we just don’t know yet how the offensive line is going to perform under his teaching, and part of that (as referenced above) is because things are still unsettled on the line.

Any word on Chad Wheeler’s return?

He will be re-evaluated next Tuesday after getting an injection that normally takes about a week to recover from the soreness. The words “plantar fasciitis” have had me worried since the day they were mentioned for Wheeler. That can be a tricky and lingering issue for any athlete to deal with, much less the left tackle who is protecting the blind side of the quarterback.

Some positive talk about DT Josh Fatu at the beginning of camp but not much since. How has he done, and will he be in the rotation? Also, seems like Leon McQuay has spent some time with the #1’s at safety during camp. Is he a likely starter, and has he shown a lot of improvement?

Josh has done OK. He hasn’t had the impact that Stevie Tu’ikolovatu has made but I still see him as being part of the 2-deep rotation, and that’s good enough for me right now. As for Leon, he has definitely been with the 1’s since fall camp began as the starter next to Marvell Tell. Physically, Leon looks great as a mature player and he seems to fit better with Clancy’s scheme. I don’t know that I would have moved him ahead of Chris Hawkins, who is now the 3rd safety in nickel situations, but that is the way they are lining up.

Garry,
Who will start and why?
Browne or Darnold – Browne: To my eyes he hasn’t been beaten out for the job but I wouldn’t think twice if Sam is named the starter.
Mama or Brown – Brown: Helton has already said we will see both against Alabama.
Mcquay or Tell – These are the two starting safeties at the moment.

Tilbey or Budrovich – Two distinct choices for Baxter. Tilbey has the bigger leg but Budrovich will remind you of Kyle Negrete with his accuracy and ability to control the ball.

Garry, assuming everyone on the OL are healthy, who do you think the starters will be? Who will be the capable back ups? Thanks

A healthy offensive line would be Wheeler at LT, either Brown or Mama at left guard and I will go with Brown as of today, Lobendahn at center, Viane at right guard and Banner at right tackle. Capable back-ups are Damien Mama at left guard, Nico Falah at center, Jordan Simmons at right guard and Chuma Edoga at right tackle. There is also promising E.J. Price at left tackle although it’s always tough if you need a true freshman at that spot.

Garry Dominic Davis is hard to cover in space. How would you use him as a RB or WR?

I think he fits more as a running back who can catch the ball out of the backfield rather than as a slot receiver. I think he has a chance to be one of the more under-the-radar guys on this team because he is so explosive with the ball in his hands but it remains to be seen how many touches are going to be available with all the other skill players on offense.

Couldn’t help notice in the latest scrimmage reports that Ross was mentioned prominently and Tell wasn’t mentioned much, if at all. McQuay seems to have won a starting spot at one of the safeties. I’m glad to see Ross’s name pop up because I think he has excellent potential. Could he even start? Hopefully the safety play will be improved over the past couple years. Can you comment on the safety situation Garry?

Ykili has definitely had a strong camp. A big part of it has been his health after missing so much practice time last year as a redshirt freshman with injuries. He’s been getting a lot of reps in the rotation with both Marvell Tell and Chris Hawkins battling hamstring issues, when they come back I would see Ykili as the #4 safety in the rotation and I do like the depth back there a lot.

I have been disappointed about the lack of utilization of our tight ends. This was a big part of our balanced offense during the CPC days. I’ve heard Helton talk about involving them more in our offense but I haven’t seen it. Other teams, Stanford in particular, have made this a staple of their offensive strategy. Why don’t we?

Actually the numbers show Helton did use the tight ends more last year once he got the job. In 5 games under Sark the tight ends had 8 catches for 50 yards and 1 TD. In 9 games under Helton they had 19 catches for 178 yards and 4 TD’s. And I think those numbers will increase even more this year based on the talent at the position, and the desire of the coaches to use the position in the play action passing game.

Garry, we’ve been hearing that there haven’t been as many pass plays to the TE’s as expected in practice. Could this be because they’re making the TEs stay put and shore up the OL?

Helton addressed this after practice on Wednesday. He said part of the reason the TE’s were used more in spring is because of the defenses that were being used by Clancy (2 high safeties being used more in spring, one high safety more in fall) and that is dictating a lot, but he reiterated that the TE spot is still a viable option for the offense.

Gary, who are the inside DL guys that we still have a shot at? And how would you rate them? IMO that’s where we need to load up.

We mentioned Terrance Lang above. I would also add named like Greg Rogers, Martin Andrus, Jay Tufele and Marvin Wilson as guys I would be happy to add. Wilson is probably the top name on that list and he would be the biggest longshot of the group. Andrus is probably the most likely to come to USC, either him or Lang.

Is the possibility of Browne transferring — weakening the overall team depth at QB for the next 2 years — be a factor is naming the starter for this year? I am personally rooting for Browne after waiting for 3 years and wading through so many coaching changes. He never got a fair shot vs. Kessler the last 2 years. I hope he gets a shot to show what he can do as a Trojan.

I don’t think that will be a huge factor. Don’t get me wrong, Helton is well aware that Max would have the option to transfer but I don’t think that option is something that would tip the decision if Helton has it in his mind that Sam deserves the job.